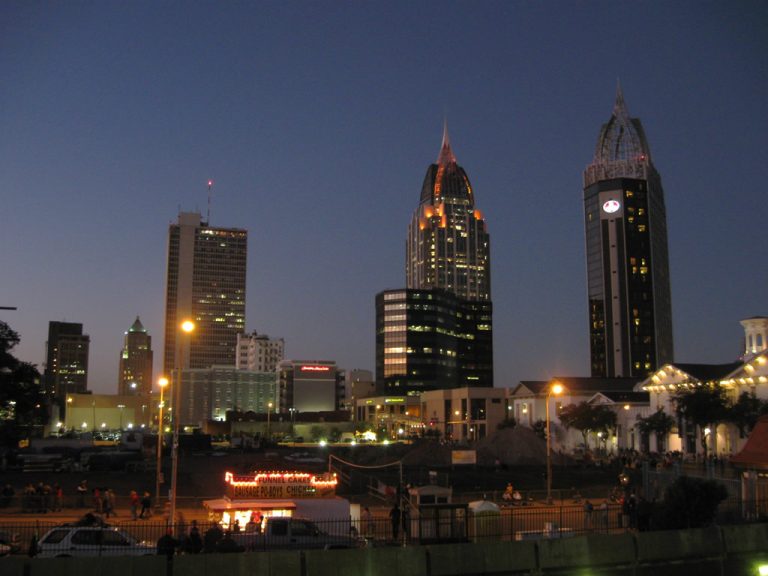 Looking north at the Mobile skyline from Fort Condé. Photo taken 02/06/09 ahead of the Maids of Mirth Mardi Gras Parade.

Completed in October 2010, Air Terminal Drive links a five-point roundabout with an extension of Grelot Road and Dawes Road south with Mobile Regional Airport (MOB) at Airport Boulevard. The new road provided an alternate to Airport Boulevard and Schillinger Road for airport travelers.

Completed in October 2010, Air Terminal Drive links a five-point roundabout with an extension of Grelot Road and Dawes Road south with Mobile Regional Airport (MOB) at Airport Boulevard. The new road provided an alternate to Airport Boulevard and Schillinger Road for airport travelers.

Opened February 20, 1941, the Bankhead Tunnel carries U.S. 98 from Government Street in Downtown Mobile to Battleship Parkway. 3,389 feet in length, the tunnel was built at a cost of $4 million.3 Tolls were collected at a plaza located at the tunnel east entrance from 1941 through to the mid 1970s. The speed limit through the two-lane tube is 35 mph, and the Bankhead Tunnel is restricted to vehicular traffic only.

Bay Bridge Road loops to the north of Downtown Mobile and the Alabama State Docks. The road carries U.S. 90 and U.S. 98 Truck across the Africatown-Cochrane cable-stayed bridge over the Mobile River. Speed limits on the road vary from 45 miles per hour in Prichard to 55 mph along Blakeley Island.

Beauregard Street is a continuation of Broad Street east from Dr. Martin Luther King, Jr. Avenue to Water Street, I-165, the Alabama State Docks and Dekle Drive. A portion of the six-lane urban arterial retains concrete.

Canal Street is a four-lane parkway built as part of an urban renewal project in the 1970s. The four-lane roadway connects Broad Street with Interstate 10 at Claiborne and Water Streets. The service roads accompanying the north side between Broad and Lawrence Streets are older sections of Canal Street.1 Canal Street is also part of the Hank Aaron Loop around Downtown and one of the Mardi Gras parade routes.

Claiborne Street represents the main gateway into Downtown Mobile from Interstate 10 eastbound. The street expands into a four-lane arterial along side the Mobile Civic Center through to the separation with Jackson and Conception Streets. Claiborne Street is partially blocked off during Mardi Gras season, as the lanes are turned into a staging area for musical acts partaking in the parades.

North-south roadway that extends Conception Street out of Mobile northward into Prichard. The highway is dwarfed by Interstate 165 to the east, and passes by wetlands areas before entering an industrial area. The north end is at the Craft Highway adjacent to Interstate 165 and U.S. 90 at Bay Bridge Road.

Conception Street/Road once carried U.S. 43 from Beauregard Street at Water Street northward to Telegraph Road. During Fall of 2001, a bridge on Telegraph Road over a railroad spur adjacent to Interstate 165 was permanently closed. Thus, truncating U.S. 43 north to the intersection of Telegraph Road at Traffic Street near U.S. 90 in Prichard.

Cottage Hill Road used to be part of the infamous “Malfunction Junction” intersection at the I-65 service roads. If you were living in Mobile between the 1970s and the mid-1980s, you would notice four-way stop signs erected along Cottage Hill and Pleasant Valley Roads at the two Interstate 65 service roads. Traffic jams stretching a few miles along Cottage Hill and Pleasant Valley Roads were not uncommon in those days — a reflection of population moving westward. Traffic control is lot better, thanks to the widening of Cottage Hill Road east of Montlimar Drive and the erection of traffic signals at the service roads during the mid-1980s.4

Dauphin Street originally ran just between Midtown and Downtown in Mobile. During the 1960s and 1970s, Dauphin Street was extended west as a four lane divided parkway to a new interchange with Interstate 65 and McGregor Road.

Dauphin Street forms a one-way couplet with St. Francis Street westbound from Broad Street east into Downtown Mobile. The final blocks of Dauphin Street are known as the LoDa (Lower Dauphin Street Entertainment District)1. In addition to a number of bars and restaurants, attractions at LoDa include the nearby Saenger Theatre (home to the Mobile Symphony) and Bienville Square.

The final blocks of Dauphin Street and St. Francis Streets, along with Royal Street altogether, were converted to two-way streets to improve accessibility for RSA Tower and the adjacent Battle House Hotel. The new traffic pattern was announced in 2003.

Hillcrest Road is a four to five lane arterial linking the Tillman’s Corner area with Old Shell Road at the University of South Alabama. Four-laning between Airport Boulevard and Old Shell Road was completed by 2007. Additional expansion took place from Girby Road south to CR 32 (Three Notch Kroner Road) in 2009.

Other Mobile Arterials and Streets

Posted in both directions on Dekle Drive, were trailblazers featuring all three Mobile area Interstates. This assembly was removed by 2007. It preceded the wye intersection with Telegraph Road (former U.S. 43) by the Alabama State Docks. Photo taken 06/03/02.

Joachim Street ends at Claiborne Street next to the Mobile Civic Center, and north of the Canal Street on-ramp to I-10 west. Photo taken 02/16/10.