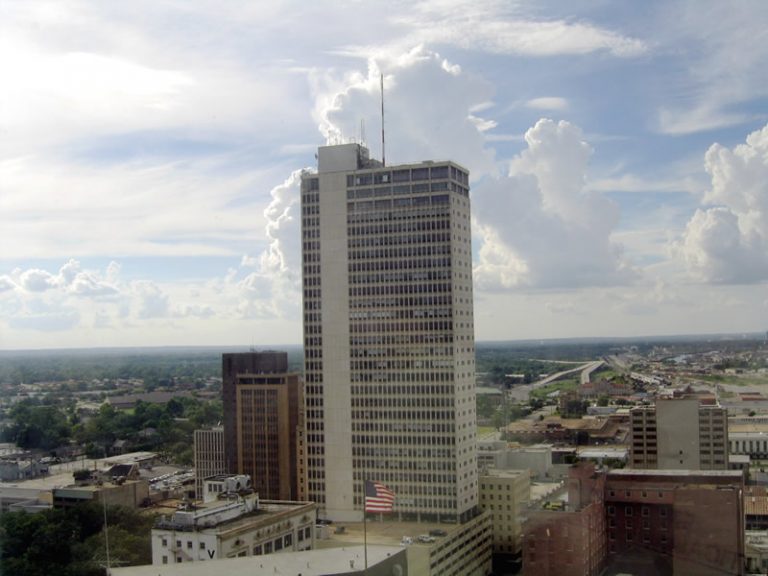 Looking north from the Mobile central business district toward the Alabama State Docks, Interstate 165, and the hills of north Mobile County. Photo taken 06/13/04.

Up until the 1980s, the southern one-piece four-way traffic light was the only one standing at the intersection of Kennedy Street and Martin Luther King Jr. Avenue. It used to have both the green and amber lenses illuminated until the late-1970s. The two-way traffic signals were later added at that intersection during the 1980s.”

Old Shell Road connects Downtown Mobile with Spring Hill College, the University of South Alabama (USA), and Schillinger Road near the U.S.C.G. Aviation Training Center. With two lanes, Old Shell Road travels through residential areas throughout most of Midtown and the Spring Hill area in Mobile. West from University Boulevard, the road expands into a multi lane arterial along the south side of USA. Widening of Old Shell Road west to Hillcrest Road was underway in 2004, and from there to Schillinger Road by late 2009.

Royal Street heads north from historic Fort Condé through the central business district. The street converted from one-way northbound to two-way traffic in 2003.

Until 1941, Royal Street was a part of the original U.S. 90 alignment through Downtown Mobile. U.S. 90 used Royal Street between Goverment and St. Louis Streets as part of its loop north to the Cochrane Bridge. When the Bankhead Tunnel was completed, U.S. 90 was realigned.

A number of mast-arm signals were removed along St. Louis Street north of Downtown Mobile. Alphonso Mason provided an explanation for the missing signals:

There is history behind most of those traffic signals in Downtown Mobile being removed and replaced with stop signals. During the 1970s, 24″ Crouse Hind signals with metal sun visors used to be erected on those older style mast arms along the inner downtown area (running north-south from St Anthony Street to Conti Street; running east-west from Royal Street to Claiborne Street/Martin Luther King Avenue). Hurricane Frederic in September 1979 blew away most of those traffic signals off of those mast arms. I recall those traffic signals on Dauphin Street at Joachim and Jackson Streets the only ones survived the storm fully intact. Frederic only accelerated the (brief) decline of Downtown Mobile. At one point, older traffic signals replaced some of the destroyed Crouse Hind signals at some of the downtown streets. Eventually, the traffic signals were taken down at downtown intersections never seeing traffic.

Texas Street is a minor collector leading west from a half diamond interchange with Interstate 10 to Broad Street and Michigan Avenue through the Washington Square community south of Downtown Mobile. Traffic signals operated at Washington Avenue until after the Central Texas Street urban renewal project.1 A road diet reduced Texas Street east to I-10 from five lanes to two lanes by 2016.

Virginia Street is a secondary arterial heading east from Houston Street to Ladd-Peebles Stadium, Mobile National Cemetery, I-10 at Exit 24, and the Ezra Trice Boulevard overpass to McDuffie Island.

Water Street is a six-lane urban boulevard paralleling the Mobile River north from I-10 and the Alabama Cruise Terminal to Interstate 165 and U.S. 90 (Beauregard Street). Water Street was constructed in place of Interstate 210, a planned elevated freeway through Mobile and Prichard.

Other Mobile Arterials and Streets

A mixture of 30" Crouse Hinds and Traffic Signal Corporation signals in use at the intersection of Mobile Infirmary Boulevard south, Kenneth Street north and Old Shell Road. Photo taken 09/10/10

Motorists turning from Montlimar Drive north to Airport Boulevard east are advised to use the frontage road to a nearby slip ramp. Photo taken 11/04/03.