Finished updating the remainder of the pages covering Interstate 10 in North Florida. This preceded a drive to Jacksonville on Friday (12-04) to check out the recently opened Baldwin Bypass for U.S. 301. Designated as U.S. 301 By Pass, the four mile long controlled access route has an at-grade intersection with U.S. 90. U.S. 301 remains along its original alignment through the town of Baldwin to the east. Final work on the bypass continues to early 2021.

Well behind schedule now, adjacent construction rebuilding the exchange joining U.S. 301 with I-10 continues to Summer 2021. The bridges that will carry the I-10 mainline across U.S. 301 have yet to be built, so who knows if things will be finished six months from now?

Started posting some of the photos from Friday. Updated the guide for State Road 200, where construction recently wrapped up at I-75. Drove U.S. 441 south into Lake City to see if signs were further updated to show the 2019 realignment of U.S. 441 west onto SR 100A and U.S. 41 to bypass Downtown. A confirming marker for U.S. 441 was added along U.S. 41 south of Bascom Norris Drive, but the remainder of area signage is unchanged. Furthermore, SR 100A is acknowledged along U.S. 41 and Bascom Norris Drive eastbound, but not at all westbound.

Typed up an area guide for Jacksonville listing all of the numbered routes. Updated pages for the following state roads:

Also updated the page covering U.S. 1 ALT northbound from the Hart Bridge to U.S. 1/17 in Jacksonville.

Ended up taking Interstate 10 east to the Big I interchange with I-95 outside Downtown Jacksonville. The connection to I-95 north joins a c/d roadway with exits to Forest Street, Forsyth Street and Monroe Street. Overheads incorrectly reference the Forest Street ramp as TO U.S. 17/SR 228. U.S. 17 and SR 228 were both realigned in 2006 to overlap with I-10 east and I-95 north to U.S. 1/23 south along Union Street. 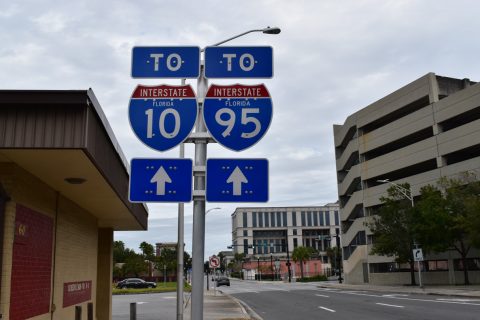 Continued through Downtown to the Hart Bridge Expressway, or the remnants of them as the four lane viaduct along Gator Bowl Boulevard at MidTown were demolished earlier this year. Construction extending into next year rebuilds Gator Bowl Boulevard into a divided boulevard with a multi use path. Ramps with the Hart Bridge and the flyovers spanning Hogan’s Creek will also be rebuilt to connect with the new boulevard. 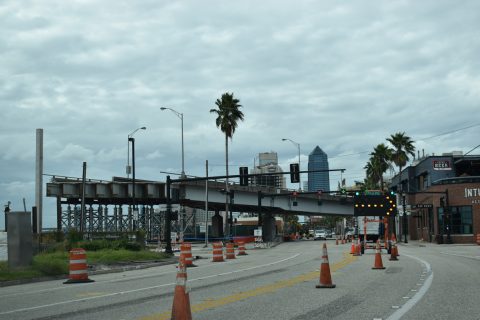 Demolition of the Hart Bridge Expressway removed the elevated structure east from this end at Bay Street. 12/04/20