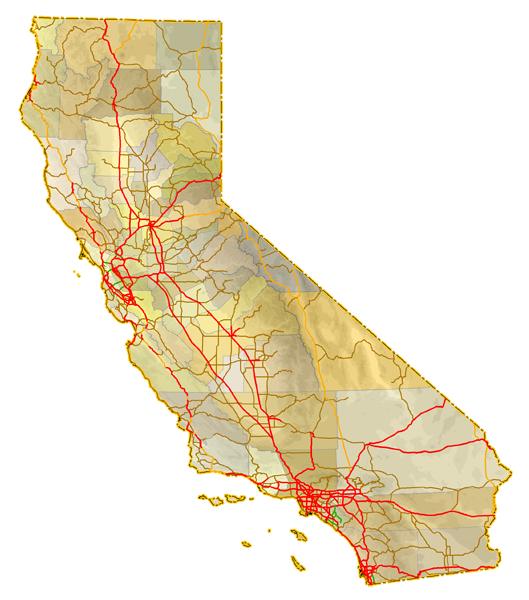 This page is sorted by route number and designation (see our list of routes below). In addition to following modern highways (typically in a south to north or west to east direction), pages here also cover historic routes, such as old U.S. highways that were largely decommissioned in 1964. Highways on this site are typically referred to as “Interstate xx, I-xx, U.S. xx, California xx, SR xx (State Route), or CR xx (County Route)”.

A uniform numbering system has been adopted to uniquely identify county roads across the state. Within this system, each route designation has a lettered prefix. Lettered routes count upward from the A series in far Northern California to the S series in San Diego County and across the Imperial Valley.

Route Suffixes are S for Supplemental and U for Unrelinquished. There are ten Postmile Prefixes referencing changes such as duplicate postmiles, realignments, spurs and overlaps. Postmile Suffixes cover instances where a major route separates along substantially different paths. The Caltrans Postmile Query Tool provides detailed information and a FAQ on postmiles

An example of Postmile Suffixes is Interstate 80, where it was relocated over I-880 around the north side of Sacramento in 1981. Postmiles on this section of I-80 are designated with the letter “M” for realignment of R mileage. All non-prefixed mileages used in California date from 1964. If a segment was realigned since 1964, the realigned portion uses the prefix “R” for first realignment. Postmile “equations” (AHD – ahead / BK – back) are used where the realigned portion leaves and rejoins the original alignment. If that first relocation is rerouted again, this second realignment uses the prefix “N” for realignment of M mileage.

Photography contributed by Alex Nitzman, Andy Field, Brent Ivy, Jake Bear, Jeff Royston, Kevin Trinkle and many others. In addition, we extend our thanks to a variety of people who have contributed to this site or have joined us on our trips to tour the Golden State: Leland Bailey, Michael Ballard, Trevor Carrier, Russ Connelly, Casey Cooper, Justin Cozart, Daniel Faigin, Mark Furqueron, Martin Grahl, Steve Hanudel, Dominic Ielati, Cameron Kaiser, C.J. Moon, Scott Parker, Joe Rouse, Pete Sison, Jeff Waller, Joel Windmiller, Mark Yoshinaka, and many others for participating in taking trips with us and submitting photos from the state of California. A list of resources used to create this site are listed at the bottom of this page.

We use quite a few resources to construct this page, and we try to keep it up to date (but that is not always the case!). We use mainly official sites, but many of the AARoads contributors also have sites of their own that have proven helpful in providing reference material for this site. To complete the AARoads California Roads and Highways pages, we have utilized a variety of resources including:

A special thanks also to C.J. Moon for his assistance in providing historical chronologies for many of the Interstates and other numbered routes across the state of California. We try to cite any other sources used on individual pages where we can. If you should find any errors on the page (and we know they are out there), please do not hesitate to contact us.