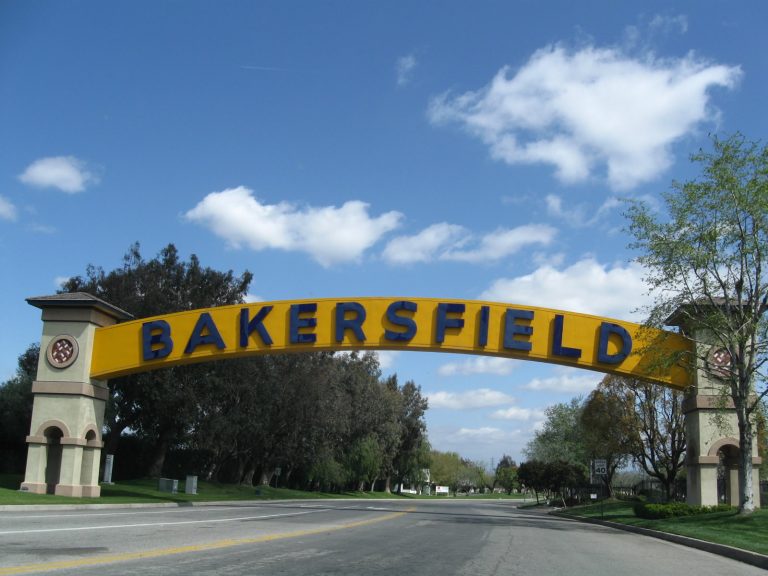 Located at the southern end of the Central Valley near the major oil fields of Oildale and Taft, Bakersfield is a regional agricultural hub. Founded in 1869 and incorporated in 1873, the city sits at an elevation of 408 feet above seal level. Growth in the 142 square mile city added 125,000 new residents from 2000 to 2015, with population numbers estimated at 376,380 in 2016.

California 99 is the original route of U.S. 99, which was decommissioned in stages starting in 1964. Old alignments of the original route are preserved as business routes in the urban areas, and the freeway was continuously upgraded to six-lane freeway standards.

U.S. 399 was decommissioned in 1964. The route began in Ventura, traveled north along California 33, then turned northeast on California 119 at Taft. For the final mileage of this short route, U.S. 399 shared alignment with U.S. 99 along Union Avenue to its end at U.S. 466 (Sumner Street) in Downtown Bakersfield.

U.S. 466 was decommissioned in 1964 and was replaced by California 58 east of Bakersfield. The route shared a brief overlap with U.S. 99 north of the city. California 46, and a few other routes, replaced the remainder of the US highway leading west from Bakersfield. Historic U.S. 466 remains intact along Sumner Street and Edison Highway through central and eastern Bakersfield.

Panorama Drive is a Bakersfield city street notable for its route along Panorama Park. The park offers magnificent views toward the Kern River, Sierra Nevada, Oildale, and oilfields north of the city. It is also the best route from Union Avenue to Alfred Harrell Highway.

This suite of photos shows the view looking north, east, and west across the Kern River toward the unincorporated community of Oildale and the oilfields located east of Oildale and north of Bakersfield. The Kern River flows silently below the Panorama Park bluff, along with the South Side Kern Island Canal. Hundreds of oil derricks dot the hills north of the river. The last few pictures show the park itself, which is mostly turf between the edge of the bluff and Panorama Drive. Photos taken 03/15/09.

Not in the state route system, Alfred Harrell Highway is a freeway that connects Mount Vernon Drive and Panorama Drive with Hart Memorial County Park. Interchanges along the route include China Grade Loop, Fairfax Road / County Dump Road and Goodmanville Access Road. The highway begins on a bluff above the Kern River and travels northeast as it lowers in elevation to the park.