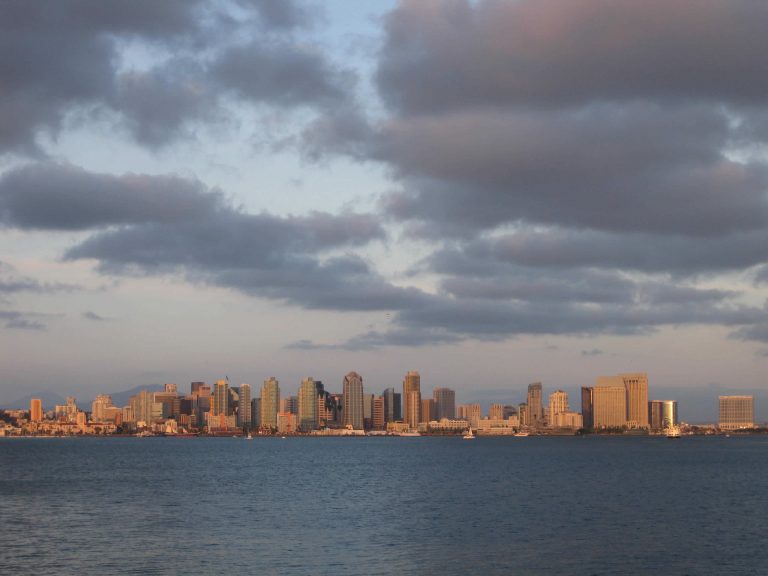 Downtown San Diego shimmers in the evening as sunlight fades on another day in San Diego. This view is from Harbor Island looking southeast in late spring. Photo taken 06/14/09.

This series of photos profiles several downtown skyscrapers. The following list of tallest buildings in downtown San Diego is ordered by height starting with the tallest as of Summer 2009. (Source: Emporis.com, retrieved 06/13/09.) 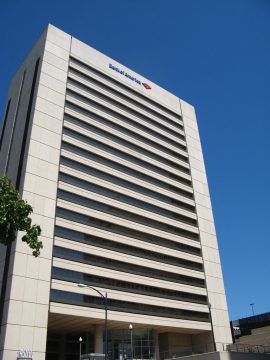 The Bank of America building is located on B Street between Fourth Avenue and Fifth Avenue. Photo taken 03/24/08. 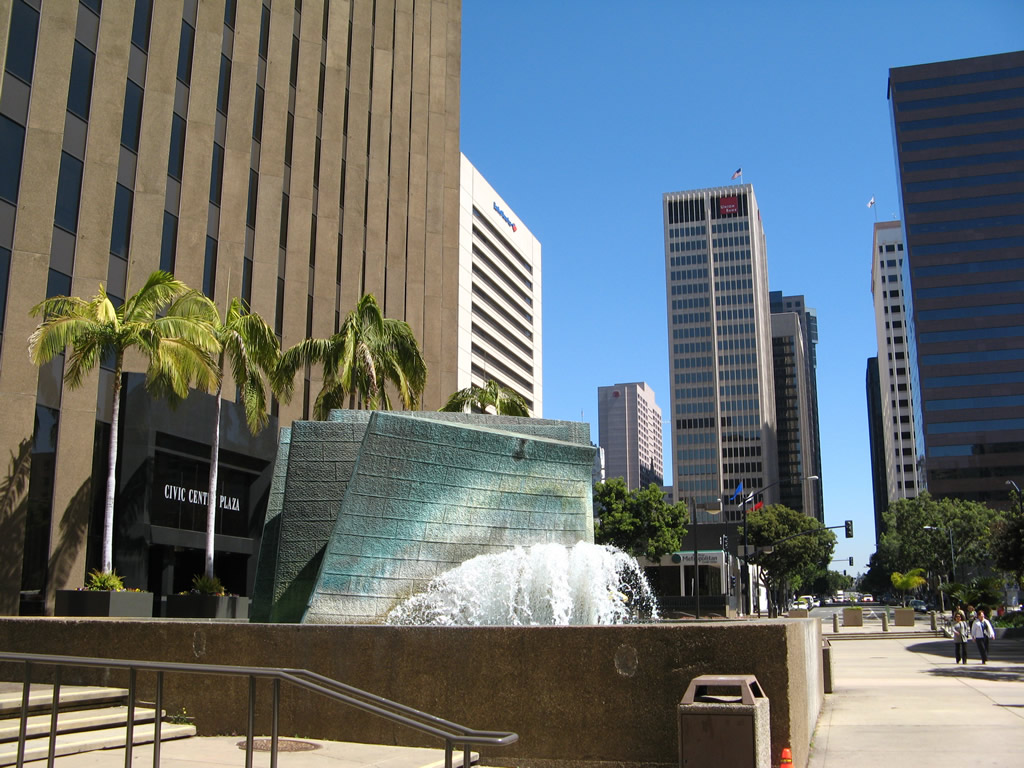 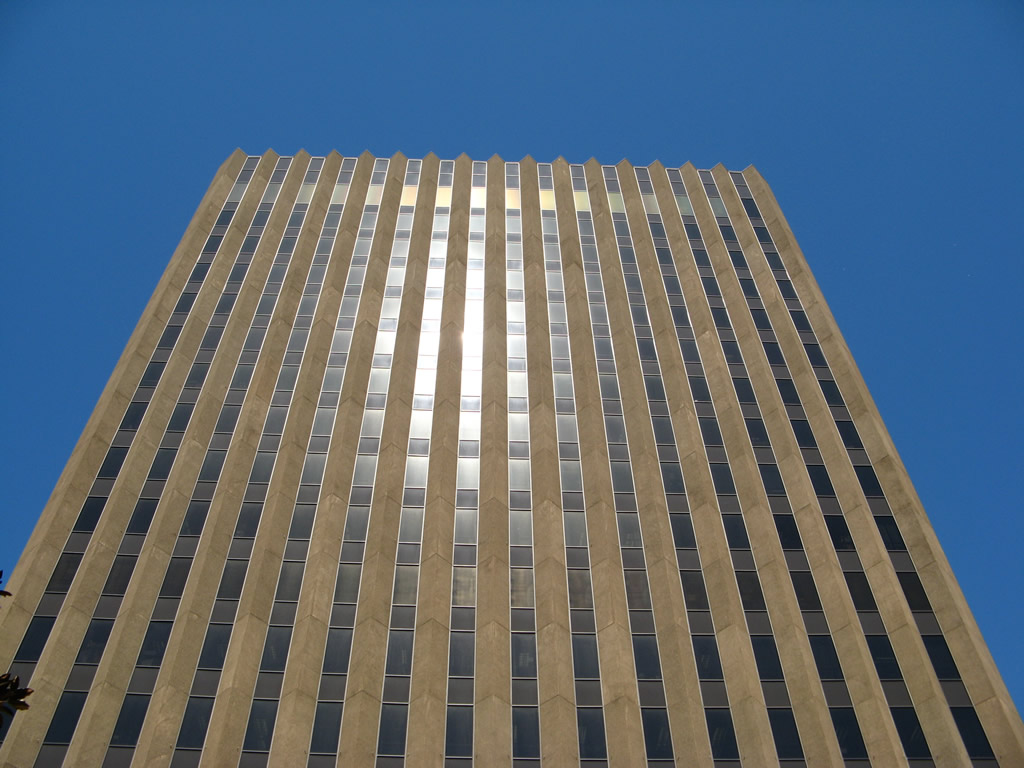 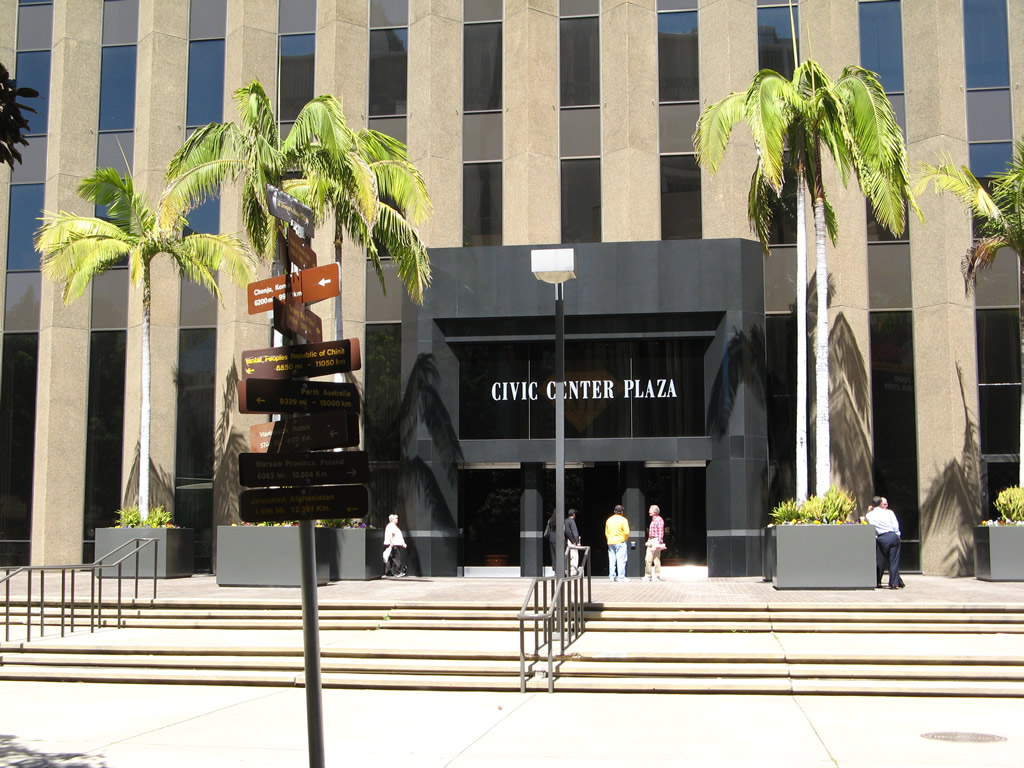 Civic Center Plaza is located at 1200 Third Avenue at the north end of the Charles C. Dail Concourse; at the southern end of concourse are the Civic Theatre and the City Administration Building. The concourse was dedicated on September 16, 1964; Civic Center Plaza was constructed thereafter. A fountain operates at the base of the Civic Center Plaza building. A plaque nearby states: “Conceived by citizens of vision, this community concourse is dedicated to the people of San Diego as a tribute to culture, industry, and good government.” 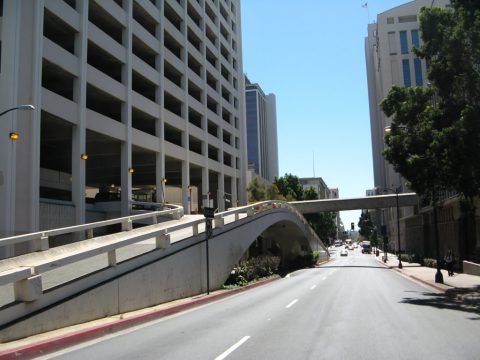 A twelve-story parking garage (the Evan V. Jones Parkade) is connected to the Charles Dail Concourse and the Civic Center. This view looks south on First Avenue (which is one-way northbound), with an arch bridge connecting the garage to First Avenue. Photo taken 03/24/08. 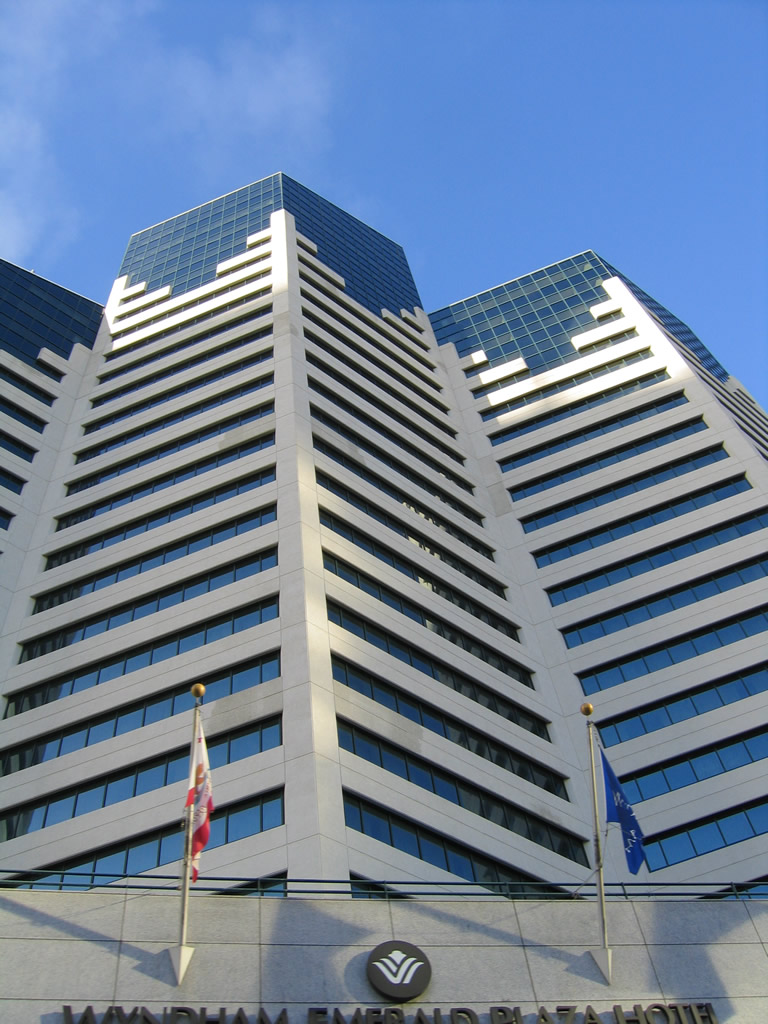 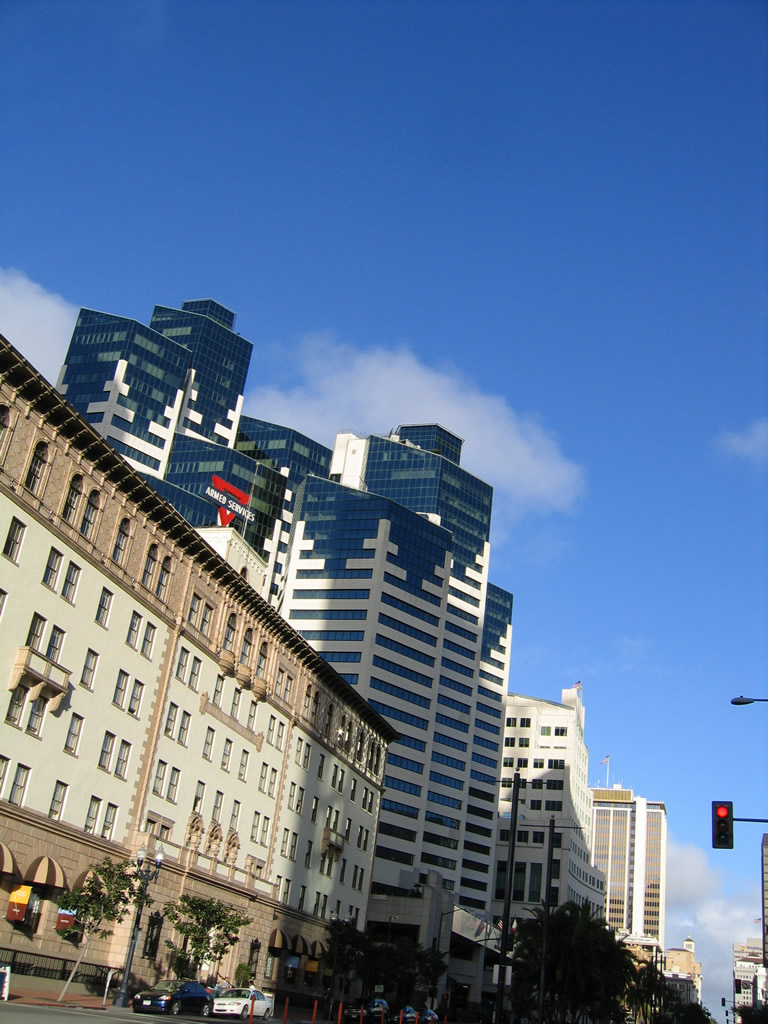 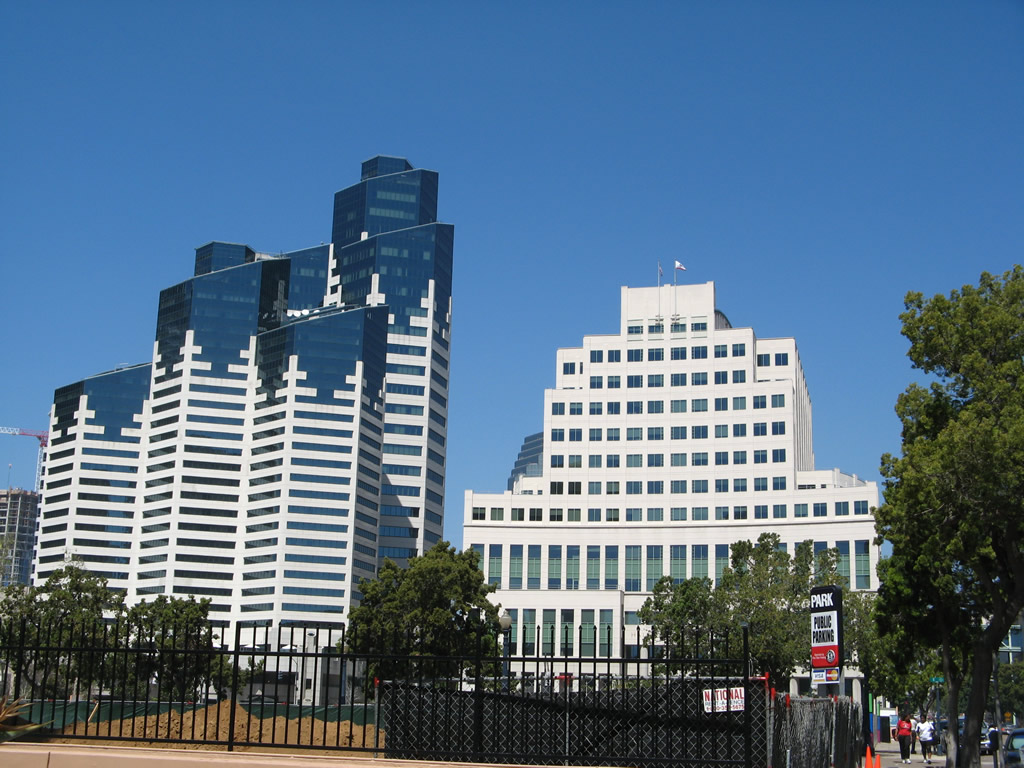 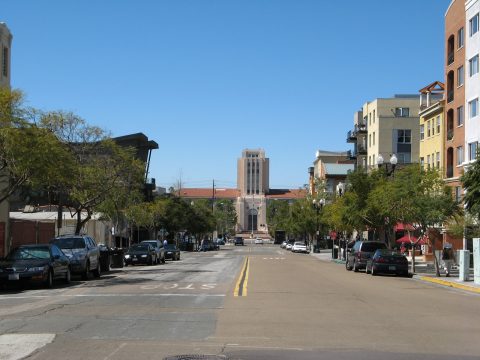 This view looks west on Cedar Street toward the County Administration Building, which was dedicated on July 16, 1938, and opened for public use on December 23, 1938. Originally it was known as the Civic Center, until city offices were relocated to 202 C Street in the Financial District. County offices remain at the County Administration Building. Photo taken 03/24/08. 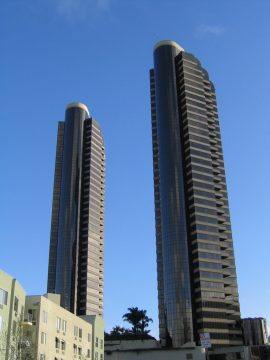 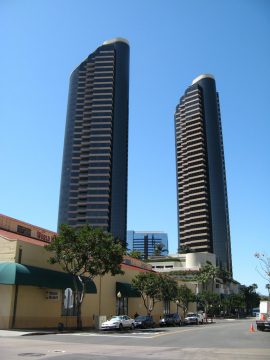 The Harbor Club towers, which rise off Martin Luther King, Jr. Promenade near the San Diego Convention Center, are distinctive for their unusual cylindrical shape and distance from the majority of the other downtown high-rise buildings. The building is located near J Street and First Avenue. Photos taken 02/19/05 and 03/24/08. 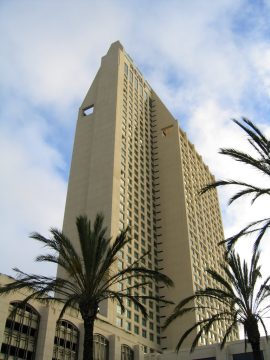 The Manchester Grand Hyatt consists of two towers. The first tower, built in 1992, is 497 feet and is the taller of the two. It has an observation area in the “Top of the Hyatt” bar on the 40th floor, which offers unparalleled views up and down the bayfront and toward Coronado. The second tower opened in 2003 and is 446 feet tall. Photo taken 02/19/05 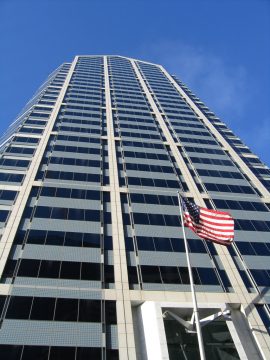 One America Plaza (opened 1991) is the tallest building in San Diego, topping out at 500 feet in height and consisting of 570,000 square feet. This is the tallest permissible skyscaper in San Diego due to height limits imposed due to the limitations imposed by nearby San Diego International Airport. The building is located near Santa Fe Depot off West Broadway and Kettner Boulevard. Photo taken 02/19/05. 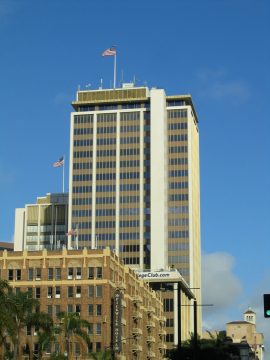 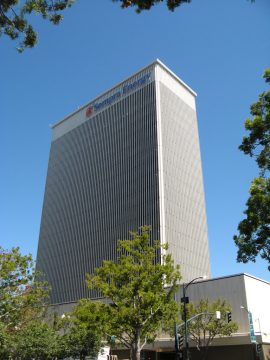 This is the Sempra Building, located in the Financial District on the block bounded by A Street, First Avenue, Ash Street, and Second Avenue. It is home to San Diego Gas & Electric, the local utility. Photo taken 03/24/08.

Home to premier events such as Comic-Con and the Environmental Systems Research Institute (ESRI) Users Conference, the San Diego Convention Center is located in the Marina District along Harbor Drive near Park Boulevard, and extends north along the bay toward Seaport Village. Designed with a nautical theme, including the signature Sails Pavilion, the convention center opened in November 1989. An expansion by September 2001 doubled the overall square footage to allow for larger conventions and other events.

Several displays of public art decorate the grounds of the convention center, including several pieces near the Park Boulevard intersection. Photos taken 03/22/11 and 03/24/08.

The Harbor Drive Pedestrian Bridge is a self-anchored suspension bridge in downtown San Diego that allows pedestrians to cross Harbor Drive (historic U.S. 101), Burlington Northern Santa Fe Railway and the San Diego Trolley between Petco Park and San Diego Bay near the San Diego Convention Center. The $26.8 million bridge opened to pedestrian traffic on March 18, 2011, and was dedicated on April 5, 2011, which was the first San Diego Padres game that season. The bridge was designed as a signature span connecting the southern end of Park Boulevard with the bay, creating a bay-to-park link via Park Boulevard. The bridge is 550 feet long.<sup>1,2,3</sup> These views show the bridge looking both east toward Petco Park and west toward the Hilton parking garage as well as north and south from the bridge toward the railroad and U.S. 101. Photos taken 03/22/11 and 06/29/11.

The Pacific Milestone is located in Horton Plaza in front of the Sam Goody’s store at the intersection of Broadway and 4th Street downtown next to the fountain. This suite of pictures shows the monument and the inscriptions and plaques on the sides as well as the compass on top. Photos taken 03/24/08. 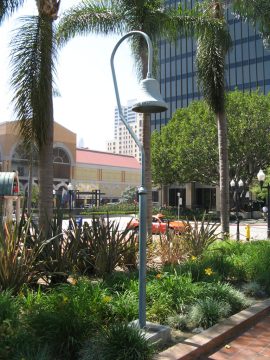 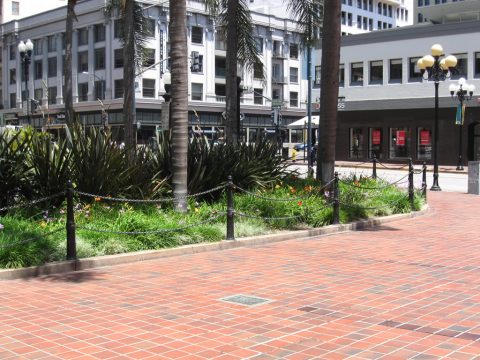 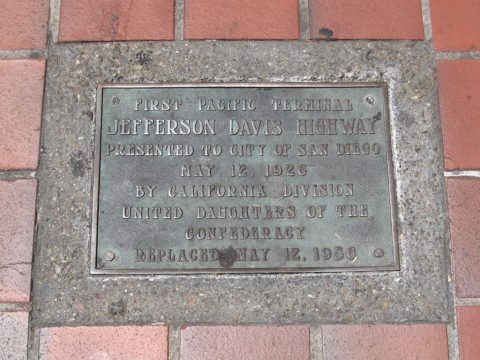 Also residing in Horton Plaza Park is the terminal marker for the Jefferson Davis Highway, which was originally placed in 1926 and replaced in 1956. The marker is placed on the ground surrounded by red tiles. Photo taken 05/14/12.