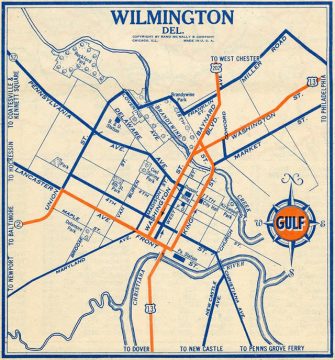 There are 49 primary state routes, four suffixed routes and nine bannered routes posted within the state of Delaware. State Route 1 is by far the longest at over 100 miles while SR 202 constitutes the shortest route at 1.01 miles. Highway guides listed here include background information, photographs, map scans and traffic counts for each state route.

Source: DelDOT
* – estimate, # – does not include mileage between SR 2 and Old Capitol Trail

Only a handful of state routes were renumbered or decommissioned. SR 796 represented a southern extension of PA Route 796, prior to its renumbering to PA 896 in 1936.

In addition to the Interstate, U.S. and State Route numbers signed on Delaware highways, many roads in the Diamond State are also numbered within the state reference number system. These designations are often displayed on placards or street signs at an intersection of a local road or neighborhood surface street, where signs display “Road NNN”, where the N’s represent the reference number. Designations are generally used for maintenance purposes by the Delaware Department of Transportation (DelDOT) on internal documents, similar to hidden state route designates in other states. However in rural portions of the state, the reference numbers may act as the default road name as well.