18 U.S. highways serve the state of Florida. Between 1956 and 1993, a specific color was assigned to each route to aid in motorist navigation. When two or more routes overlapped, each would retain their respective color on shield assemblies. 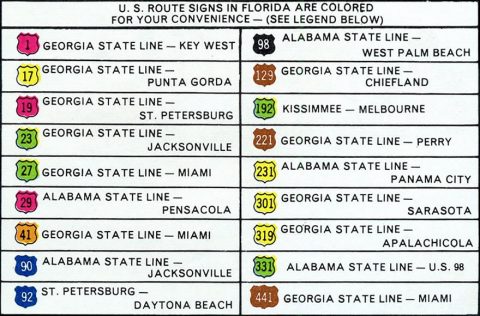 The system assigned a unique color for each route, under the premise that a U.S. highway would not intersect another route using the same color scheme. An exception to this rule took place in 1971. With both routes signed with green markers, U.S. 192 was extended west from Kissimmee to U.S. 27 at Four Corners.

Florida discontinued the colored U.S. route system in 1993 to comply with federal signing standards outlined in the Manual on Uniform Traffic Control Devices (MUTCD). Going forward, all routes were signed with nationally standard black and white markers. However as existing stock was used, some new colored route markers were installed until 1996.

Over the ensuing decades, colored U.S. route markers in Florida were replaced, leaving very few remaining assemblies across the state. Those still standing are generally found in rural areas of the Florida Panhandle, the Big Bend area, and North Florida on county roads or former state secondary roads.

U.S. 17-92 overlap between Lake Alfred in Polk County and DeLand in Volusia County. This assembly was posted on CR 557/Haines Boulevard in Lake Alfred and replaced by 2007. Photo by Justin Cozart (12/03).

U.S. 441 travels the state from Miami north to Lake City via Broward County, Palm Beach County, Orlando and Ocala. Here it is routed with U.S. 17-92 along Orange Blossom Trail. Photo by Jeff Royston (07/97).

An older style U.S. 27 confirming marker with the cardinal direction below near Clewiston. Photo by Michael Summa (1982).

U.S. 29 north just prior its interchange with Interstate 10 northwest of Pensacola. Photo by Michael Summa (1989).

U.S. 41/441 shields at the west end of SR 238 at Ellisville. The previously familiar thin black outline around the white 41 numerals on the standard 24 inch marker were removed by this time. Photo by Michael Summa (1989).

U.S. 41 is signed as an east west route in Miami-Dade County. This assembly was located near the south end of Interstate 95 in Miami. Photo by Michael Summa (1975).

U.S. 92 Business in Lakeland. Photo taken by Michael Summa in 1978 when a detour was in place. This explains why the arrow was turned upside down.

Pasco County installed shields along Lock Street in Dade City. As of October 2006, these shields were replaced with standard black and white assemblies. Photo by Justin Cozart (12/03).

U.S. 231 south at U.S. 98 Business in Downtown Panama City. Business and Alternate routes were shown in the reverse pattern as the regular shield. Photo by Justin Cozart (12/03).

Westbound U.S. 98 Business at the south end of U.S. 231 in Panama City. These overheads were replaced by 2006 with standard green/white signs. Photo by Justin Cozart (12/03).

U.S. 192 used green markers, and until its extension west to U.S. 27, did not intersect another route with the same color designation. Photo by Michael Summa (1974).

Borderless style shield for U.S. 221 posted at the northbound beginning of the route in Perry. Photo by Michael Summa (1989).