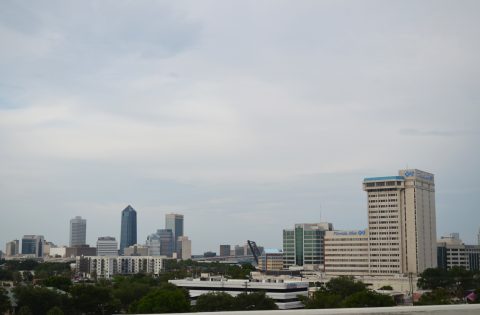 Jacksonville is the largest city in Florida with a land area of 747 square miles and the most populous with an estimated 911,507 residents as of 2019. Located in North Florida along the St. Johns River and the First Coast, Jacksonville is a transportation hub. The city is the headquarters of CSX Transportation and the Florida East Coast (FEC) Railway. Jacksonville also represents the gateway to Florida from the Northeastern and Mid-Atlantic States with Interstate 95 running south through the city toward the Florida Peninsula. Jacksonville also lies at the east end of transcontinental Interstate 10, which stretches across the U.S. to Santa Monica, California. The city grew by 90,000 from 2010 to 2019.1

Jacksonville was founded in 1822 near Cow Ford along the St. Johns River. Market Street was the first named street, and the town was ideally located along the Kings Road south from Georgia. Isaiah Hart was credited as the town’s founder, though John Brady was also a major property owner at the time.

Winter tourists began flocking to Jacksonville during the Winter months starting in 1868, often doubling the area population. The first bridge spanning the St. Johns River was completed in 1890. The railroad span was financed by rail magnate Henry Flagler. Its completion started the shift of population southward toward St. Augustine.2

Following World War II, suburban development in Duval County expanded in earnest. The city of Jacksonville during the same time period began a number of building projects, including a new city hall. As population shifted from the city to the unincorporated suburbs, the Jacksonville’s budget strained while residents in Duval County had difficulty in obtaining municipal services. A study in 1958 recommended annexations to increase the tax base for the city. Voters however rejected annexation referendums six times from 1960 to 1965.3

Financial woes grew in Jacksonville through the mid 1960s. This was further exasperated by corruption among many of the city’s elected officials. As a result the city population decreased while property taxes increased. However also gaining support at the time was a movement to consolidate the Jacksonville city government and the Duval County government. Consolidation efforts cited lowering taxes, increasing economic development and unifying the community among other benefits.

The Local Government Study Commission was created on October 1, 1965 by state legislative action. Comprising a group of 50 with no political ties, the Commission designed the framework for the eventual new government. A consolidation referendum passed overwhelmingly by voters in 1967, and on October 1, 1968, Jacksonville and Duval County governments merged to create the consolidated City of Jacksonville.3

Jacksonville and the St. Johns River2

The first automobile bridge spanning the St. Johns River was the St. Elmo “Chic”  Acosta Bridge, built in 1921. The nearby Main Street Bridge, later named the John T. Alsop Bridge, was completed to the east from Downtown to South Side Jacksonville in 1941. The St. Johns River Channel was dredged to a depth of 34 feet in 1945. The Mathews Bridge, connecting Arlington and the Atlantic beaches with Downtown, was constructed across the river in 1953. The Fuller Warren Bridge opened to traffic the following year.

The Isaiah D. Hart Bridge, traveling southeast across the St. Johns River from Downtown near the sports complex to Empire Point and St. Nicholas, opened in 1967. Completed in 1970, the Buckman Bridge crosses the St. Johns from Orange Park to Mandarin. Located 14 miles upstream from Downtown, the three mile bridge is Jacksonville’s longest. The last bridge built was the Napoleon Bonaparte Broward Bridge between Arlington and the northside of Jacksonville. Named for the former Florida Governor and U.S. Senator, the cabled stayed bridge opened in 1989. It is more commonly known as the Dames Point Bridge.

Tolls on Jacksonville area bridges were removed by 1989, with the toll booths for the Fuller Warren Bridge the last to be demolished. The 1921 Acosta Bridge was replaced with a modern, high level span in 1994. The Buckman Bridge was expanded to an eight lane bridge by January 1997.