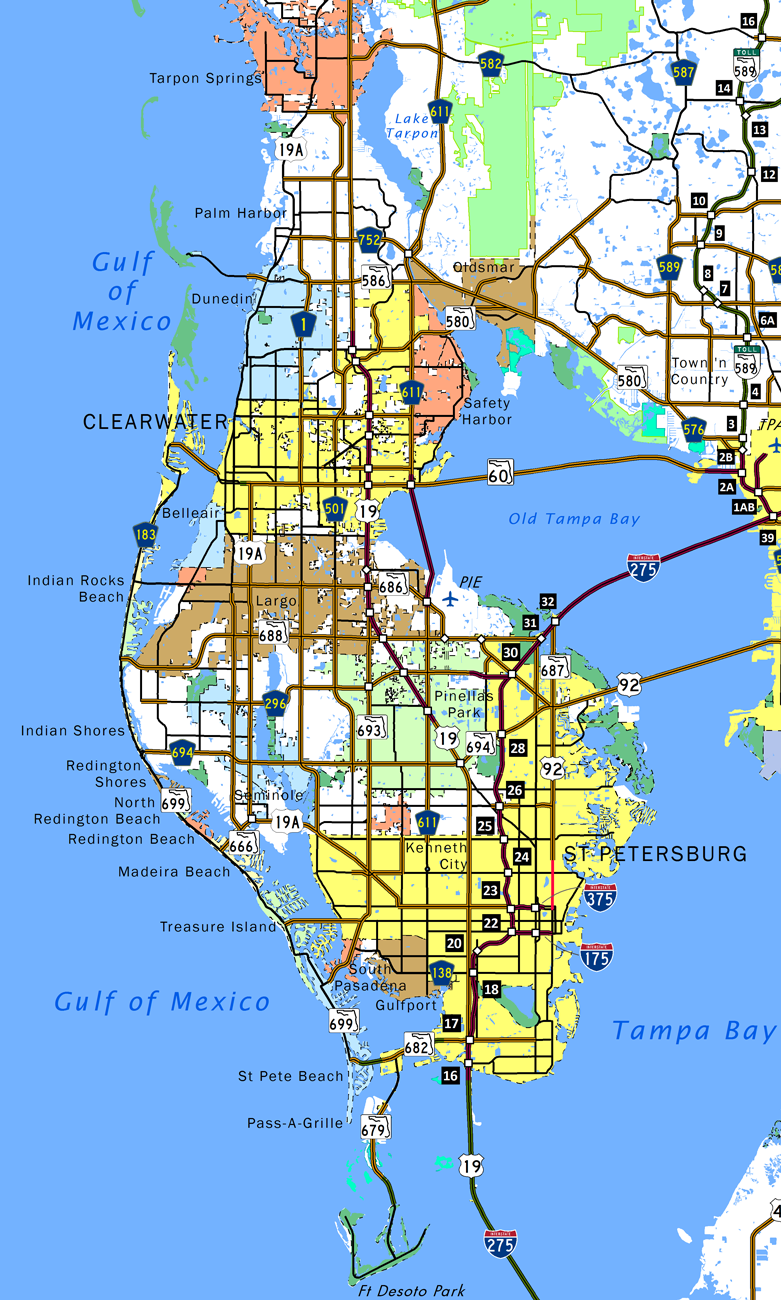 Pinellas County was formed in 1912, when it separated from Hillsborough County. A popular beach destination, magazines routinely rate Pinellas County beaches among the best in the entire country. However, with only 280 square miles and a booming population of 916,542 as of the 2010 Census, Pinellas County is perhaps the most densely populated county in Florida. Even Miami-Dade County, with its dense urban atmosphere near the coast has a significant amount of undeveloped land in the Everglades. No similar amount of undeveloped land is found in Pinellas County, with the exception of the Brooker Creek Preserve north of Oldsmar.

There are several freeways that were planned but were canceled and not constructed. One of these was the Pinellas Belt Expressway, which was touted as a beltway that would connect with the Interstate 275 and Interstate 175 interchange at its southeastern end. It was then planned to follow today’s U.S. 19 Alternate/Florida 595 west to Seminole Boulevard and then aim north, connecting with the unconstructed Ulmerton Road Freeway (Florida 688, which is no longer slated to be upgraded to a freeway) and then merging with the canceled St. Petersburg-Clearwater Expressway, a diagonal route from Interstate 275 north of the Interstate 275/375 interchange and angling northwest to Largo near the U.S. 19 Alternate and Florida 686 (East Bay Drive) intersection.

The Pinellas Belt Expressway was actually budgeted for construction in 1974, but local opposition prevented the freeway from progressing. This freeway would have taken via eminent domain a good deal of commercial areas, including retail outlets, but several homes would also have to be condemned and removed. This was unacceptable to residents, so the freeway was canceled by the late 1970s. However, certain segments were built, including the full freeway interchange between U.S. 19 Alternate and Florida 666 in Bay Pines/Seminole.

State Road 595 is a 37.31-mile long route that accompanies U.S. 19 Alternate throughout Pinellas County. The route is posted along side the U.S. 19 Alternate (5th Avenue N) spur east from U.S. 19 (34th Street S) to the west end of U.S. 92 and SR 687 along 4th Street Sin St. Petersburg. The remainder of SR 595 is unsigned along U.S. 19 Alternate north from Bay Pines through Seminole, Largo, Clearwater, Dunedin, Palm Harbor and Tarpon Springs. SR 595 and U.S. 19 Alternate conclude just across the Pasco County line at Holiday.

The interchange between SR 666 and U.S. 19 Alternate is a remnant of a freeway that was once proposed for the SR 595 and U.S. 19 Alternate corridor between Interstate 275 and Largo via Seminole. Known as the Pinellas Belt Expressway, this freeway was proposed in 1974 for construction by 1979, but it was removed from plans as a result of community opposition.

SR 682 is a 3.72-mile route that follows the Pinellas Bayway from SR 699 (Gulf Boulevard) in St. Pete Beach east to Interstate 275 and U.S. 19 (34th Street South) near Eckerd College in St. Petersburg. Tolls are collected along the Bayway eastbound over the Intracoastal Waterway and westbound over Boca Ciega Bay Channel. The eastern portion of SR 682 follows 54th Avenue South.

State Road 686 is a 10.82-mile route that begins at the intersection of U.S. 19 Alternate (Seminole Boulevard / Missouri Avenue) and West Bay Drive in the city of Largo. Eastward, SR 686 travels east on East Bay Drive, changing into Roosevelt Boulevard at the diamond interchange with U.S. 19. 1.25 miles from there, Roosevelt Boulevard angles the state road southeast to St. Petersburg-Clearwater International Airport (PIE) and a merge with SR 688 along Ulmerton Road.

A portion of SR 686 that is concurrent with SR 688 near the airport was considered in the early 1970s for the Ulmerton Expressway, which would have followed all of SR 688 from Largo east to Interstate 275. That freeway was canceled by the mid-1970s. Prior to 2017, the eastern end of the state road tied into a congested intersection with U.S. 92 and SR 687 (4th Street N) at both the ends of SR 694 (Gandy Boulevard) and unsigned SR 600, the companion of U.S. 92 (Gandy Boulevard) east to the Gandy Bridge. A split diamond interchange was constructed here during the $83-million project that upgraded 2.5 miles of SR 694 to freeway standards.

State Road 687 runs parallel to Interstate 275 from Downtown St. Petersburg north to the Howard Frankland Bridge approach at Big Island. The state road runs almost entirely along 4th Street, with the exception of the one-way couplet through Downtown where northbound utilizes 3rd Street and one block of 5th Avenue North. SR 687 doubles as U.S. 92 between 5th Avenue North (U.S. 19 Alternate / SR 595) and Gandy Boulevard (SR 600 / 694). This overlap is fully signed.

Interchanges along SR 688 (Ulmerton Road) connected the ends of the short overlap with SR 686 by PIE Airport. The western exchange was removed as part of ongoing construction to build the tolled Gateway Expressway. Previous upgrades were considered in the early 1970s for SR 688 as part of the once-proposed Ulmerton Expressway, a freeway that would have connected Largo with Interstate 275. That freeway was canceled due to local opposition by the mid-1970s.

The Gateway Expressway is a two-prong toll road system that will link Interstate 275, U.S. 19 and St. Petersburg-Clearwater International Airport (PIE). SR 690 will overlay CR 296 (118th Avenue North / Bryan Dairy Road) as a four-lane elevated roadway west from I-275 to U.S. 19. SR 686A will comprise a four-lane viaduct system running along SR 686 (Roosevelt Boulevard) southeast from the Bayside Bridge (CR 611) to SR 690 just west of I-275. All electronic tolling will be implemented along both expressways.

SR 693 begins in the business district of St. Pete Beach at the turn of SR 699 from 75th Street to Blind Pass Road. The state road provides the first toll free crossing (Corey Causeway) of the Intracoastal Waterway northward from the Pinellas Bayway as it leads northeast to South Pasadena and St. Petersburg. Skirting the west side of Pinellas Park, SR 693 travels on 66th Street North until merging with U.S. 19 (SR 55) in eastern reaches of Largo. The state road is 11.96 miles long.

Collectively Park Boulevard to the west and Gandy Boulevard to the east, the combination of County and State Road 694 travels across Pinellas County between Indian Shores and St. Petersburg. The county road portion originates at SR 699 (Gulf Boulevard) along the Park Boulevard Bridge (78th Avenue Bridge) spanning the Intracoastal Waterway east to Oakhurst. The arterial route proceeds across the city of Seminole into Pinellas Park, where it becomes State Road 694 at 66th Street North (SR 693).

SR 694 extends 6.04 miles east initially as a commercial boulevard to The Shoppes at Park Place Mall and a SPUI with U.S. 19 and northeast as a controlled access expressway from Grand Avenue to the five-way intersection with 4th Street North (U.S. 92 and SR 687) and Roosevelt Boulevard (SR 686) in St. Petersburg.

The Gandy Freeway was proposed as a 12.6-mile freeway that would have connected directly to the Gandy Bridge (and to the Leroy Selmon Crosstown Expressway in Hillsborough County). It was first considered in the 1960s but was canceled by 1979. A subsequent project started in 2014 upgradedGandy Boulevard from I-275 east to 4th Street North to a freeway, with bridges over Dr. Martin Luther King Street (CR 803), SR 686 (Roosevelt Boulevard) and SR 687. Construction warpped up in Spring 2018.

Following the Gulf of Mexico barrier islands in southwest Pinellas County, State Road 699 travels 16.49 miles north from St. Pete Beach to Indian Rocks Beach. The route is more popularly known as Gulf Boulevard, which it follows for its entirely except between 75th Avenue and Blind Pass on Sand Key.

SR 699 used to continue further south and north from its current end points. The southern extension took it along Pass-a-Grill Way between Pinellas Bayway and Pass-a-Grille Point. North from Indian Rocks Beach, SR 699 continued along Gulf Boulevard through to the then tolled Clearwater Pass Bridge linking Long Key with Clearwater Beach Island. Additionally an east-west branch was signed along Madeira Beach Causeway. This is now SR 666. Some historical maps, including the USGS Quadrangle map, also show Corey Causeway (SR 693) as another east-west branch of SR 699.

A major east-west boulevard, 38th Avenue North doubles as Pinellas County Road 184 between U.S. 19 Alternate (Tyrone Boulevard) and U.S. 92 (4th Street North) across the city of St. Petersburg. The county road designation is one of the better marked routes within the county.

Pinellas County Road 296 is fairly well signed along Bryan Dairy Road and 118th Avenue North within the Pinellas Park and St. Petersburg area. The highway begins as a freeway spur leading west from Interstate 275 to 31st Court North at 118th Avenue North. Construction is underway to add the tolled Gateway Expressway (SR 690) along the CR 296 right of way west from I-275 to U.S. 19.

Pinellas County Road 501 follows Belcher Road from Park Boulevard (CR 694) north to CR 816 in Palm Harbor. The Belcher Expressway was proposed in 1965 along 10.6 miles of Belcher Road through Pinellas Park and Largo as an alternative to U.S. 19. Plans for the freeway were canceled in 1978.