Florida’s State Road system was laid out in 1917 under the supervision of George Barnes. The numbering system was haphazard with roads numbered according to the order in which they were built. Northernmost roads were numbered first. Route numbers were legislatively defined starting in 1923.1 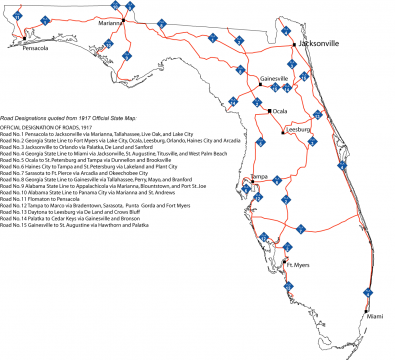 The original state road marker consisted of a blue diamond sign with the state abbreviated as “FLA” above the road number. Posted by the early to mid-1920s, the shields remained unchanged for the remainder of that decade.

By the 1930s, the state road marker was redesigned to include a black state outline on a white square. Further modifications were made to the sign style over the ensuing decades, leading to the current marker, which debuted in 1977.

Since several officials found the original state road system to be “utterly confusing,” in 1941, Florida decided to create a new state numbering system. Laid out in a grid pattern, the replacement system made traveling easier by grouping similar-numbered roads around the same city. However because of World War II, renumbering of most roads across the state did not occur until 1946. 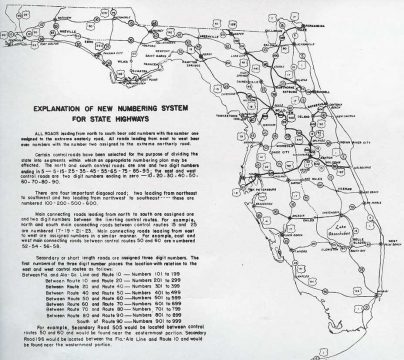 Route numbers posted wihtin the state secondary system were designated with a prefix of S-. A subtle difference in the state road shield helped classify secondary roads from their primary counterparts. The state outline on state secondary road signs omitted Cape Canaveral and rounded the western panhandle. Shielding at the end points of these roads often accompanied placards indicating that the road was maintained as a secondary road.

When the secondary system was retired in 1977, existing signs were slowly replaced with county pentagons or altered so that the “S-” prefix was changed to “C-” for county, or a county decal was affixed to the bottom left of the shield face. Some exceptions in the secondary system remained state maintained through to 1982 for federal funding purposes.