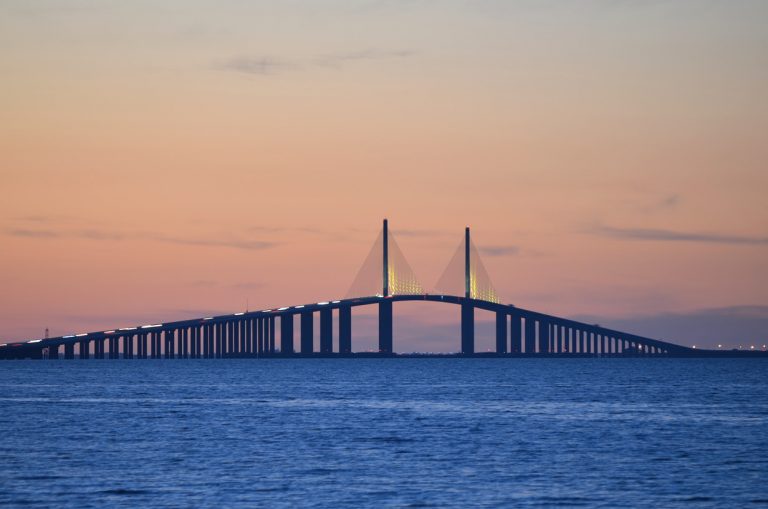 A view of the Sunshine Skyway bridge at twilight from the south rest area facility along Interstate 275 & U.S. 19 north in Manatee County. Photo taken March 31, 2014.

The Sunshine Skyway Bridge is a cable-stayed bridge that carries Interstate 275 & U.S. 19 across Tampa Bay, connecting Palmetto with St. Petersburg. The current span replaced two steel cantilever bridges that crossed the bay further to the west.

Constructed between October 1950 and mid-1954 at a cost of $22 million, the original span of the Sunshine Skyway opened to vehicles on September 6, 1954. The 150-foot tall steel cantilever bridge carried two-way traffic between Manatee and Pinellas counties over Tampa Bay. Increased traffic volumes during the 1960s resulted in the construction of a parallel span which opened in 1971. Between 1971 and 1980 the original crossing carried U.S. 19 northbound traffic while the newer crossing carried U.S. 19 southbound traffic. 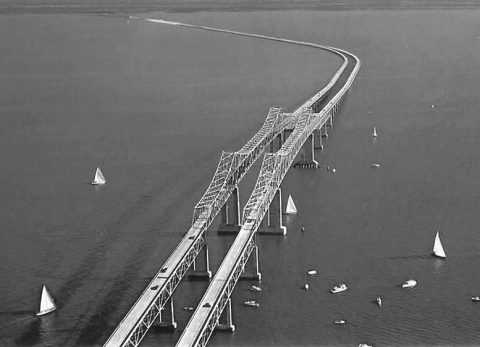 On the morning of May 9, 1980, a portion of the southbound span fell into Tampa Bay when the 606-foot freighter Summit Venture collided with one of the piers near the main shipping channel. Due to low visibility from inclement weather, series of misjudgements, and strong northwesterly winds, the freighter ended up off-course from the main channel and was on a collision course with the southbound span. By the time the captain was able to ascertain where the freighter was in relation to the Skyway it was too late; the freighter rammed one of the piers, sheering it completely off its foundation. The force of the collision with the bridge support caused approximately 1200 feet of concrete and steel to fall into the bay. The Summit Venture came to a stop at the edge of one of the northbound piers but did not strike it enough to do any damage to that span.

In total, several vehicles including a charter bus plummeted 150 feet into the waters of Tampa Bay, ending the lives of 35 people that morning. Only one driver who fell with the bridge survived the fall, with an additional vehicle stopping just over a foot from the broken spans edge. 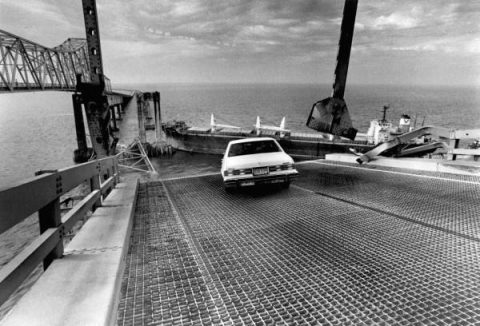 Scene from the morning of Friday, May 9, 1980 showing the aftermath of the collision between the Summit Venture and the southbound span of the Sunshine Skyway. 1200 feet of span and several vehicles fell 150 feet into the bay below. One vehicle stopped just shy of the broken edge. 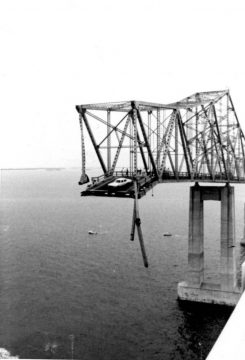 Two-way traffic resumed on the 1954-built span but decisions loomed on whether to rebuild the damaged southbound span or to replace the bridges entirely. With Interstate 275 being constructed at the time on either side of the Skyway, a final choice was made by then Governor Bob Graham to build a new bridge to carry the freeway between the two counties. On January 31, 1981, Graham made an announcement that the Skyway would be replaced with a concrete cable-stayed bridge.1

Construction of the new crossing commenced in June 1982 and lasted until early 1987. The new Skyway would have its maximum vertical clearance raised to 193 feet and its main channel span lengthened to 1200 feet. Additional safety features included the building of 36 concrete man-made bumper islands (also called Dolphins) that would withstand up to 29.6 million pounds of force as well as rock islands around each main tower supporting the 1200 foot main span over the shipping channel. The new Skyway was also built to be able to withstand winds of 240 mph and gusts of up to 290 mph. On April 30, 1987, a new Sunshine Skyway opened to traffic and completed the Interstate 275 freeway through the Tampa-St. Petersburg metro area, at a cost of $220 million. 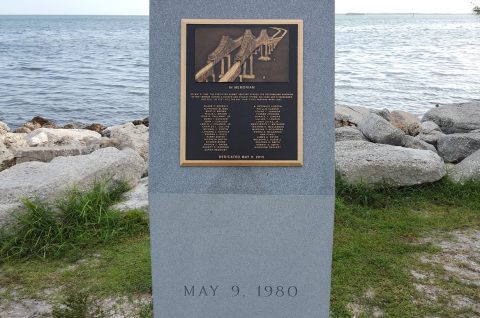 A bill effective July 1, 2014 allowed the Florida Department of Transportation (FDOT) to permit for the placement of a marker, by a private entity, in memory of the 35 people who lost their lives in the May 1980 tragedy. The private entity would assume all costs and responsibility of installation, modification, and removal of the memorial.2 The placard and memorial will be located at the rest area wayside park at the north end of the bridge. 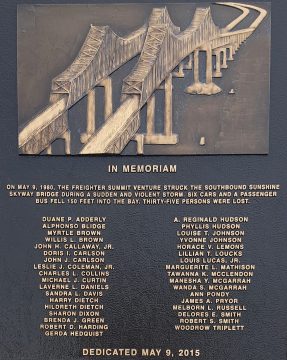 On May 9, 2015, 35 years to the day, the memorial was dedicated to those who lost their lives that tragic morning. The marker is comprised of a six foot granite structure with a metal placard attached showing an image of the former cantilever spans along with the names of the 35 travelers who met their fate.

The Skyway memorial rests along the edge of Tampa Bay near the southern end of the rest area on the north side of the bridge.

Additional information regarding the Sunshine Skyway Bridge was originally posted on TropicalTurnpikes.com and was reproduced with permission by Justin Cozart.