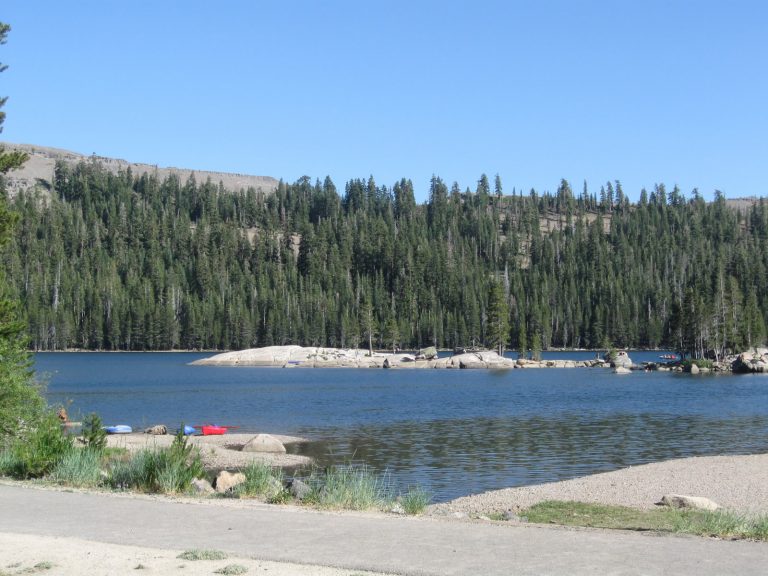 This view looks south at Lake Alpine, a reservoir located along California 4 east of Bear Valley and west of Ebbetts Pass in the Sierra Nevada. The lake is operated and managed by the Northern California Power Agency, while national forest campgrounds are located along the north shore of Lake Alpine. Photo taken 07/18/09.

California 4 connects the San Francisco Bay Area with the Sierra Nevada, passing through the city of Stockton along its 192 mile course. The highway originates at Interstate 80 near Hercules, and begins as a four-lane expressway from Hercules east toward Martinez. Once in Martinez, California 4 becomes a full freeway known as the California Delta Highway. Along this industrial route, California 4 serves a number of power plants, ports, and industries in Concord, Pittsburg and Antioch. The freeway then connects to the California 160 high bridge that crosses over the Sacramento/San Joaquin River Delta on its route north to Sacramento.

Upgrades to SR 4 through Contra Costa County included the six-year Highway 4 Widening Projects involving the Contra Costa Transportation Authority (CCTA), Caltrans, Bay Area Rapid Transit (BART) and a number of other organizations. The freeway was expanded from four to eight overall lanes along a 5.5 mile segment from Loveridge Road (Exit 24) to just west of SR 160 (Exit 30). Missing ramps at the exchange joining SR 4 and SR 160 were completed, and the SR 4 Bypass south from Lone Tree Way to Balfour Road in Brentwood was widened to four lanes. Additionally, reconstruction of the freeway through Pittsburg and Antioch accommodated a 10 mile BART extension, with the station at Hillcrest opened by early 2018. Overall 21 bridges were replaced between Pittsburg and Brentwood. A ribbon cutting event for the project was held by officials on July 20, 2016.1

The Highway 4 bypass extends 12.4 miles from Antioch to Brentwood. Split into three sections, the northern segment opened from SR 4 south to Lone Tree Way (Exit 33) in February 2008. The central portion, from Exit 33 south to Balfour Lane, was completed in April 2002. The final segment south to Vasco Road opened in fall 2008. Plans for the bypass date to the late 1980s, with the State Route 4 Bypass Authority formed in 1989 and design environmental documents approved in 1994. Groundbreaking for segment 2 took place in 1999.2

Additional work on the Highway 4 bypass upgrades the at-grade intersection with Balfour Road into a parclo A2 interchange. Construction on the $42.7 million exchange started in spring 2017, and the new eastbound lanes for SR 4 opened to traffic on the weekend of July 20-22, 2018. Work continues through early 2019.3

A portion of the long planned western extension of the Crosstown Freeway in Stockton opened to traffic by the end of 2016. A $140 million project, the Highway 4 Ramp Extension constructed an elevated four-lane freeway west from the previous roadway end at Fresno Avenue to Navy Drive at the Port of Stockton. Finished one year ahead of schedule and $50 million below budget, the new freeway allows truck traffic to bypass the Boggs Tract neighborhood where the Crosstown Freeway previously ended.4

The $214.5 million SR 99 - South Stockton Six-Lane Widening Project reconfigured SR 4 where it ties into the freeway from Farmington Road in southeast Stockton. Construction between June 2012 and December 2016 included the elimination of both ramps along the concurrent section of SR 4/99 at with Dr. Martin Luther King Boulevard and the right in right out (RIRO) ramps with Farmington Road. A new folded diamond interchange was constructed for Golden Gate Avenue, which was extended southeast to Farmington Road as the new alignment for SR 4. The Golden Gate Avenue Interchange was finished in summer 2015.5