California 371 is a remnant of a much longer California 71, back when that route used to extend southeast from Corona via the current Interstate 15 to Lake Elsinore and Temecula, and then turned east along California 79. When California 71 was decommissioned in favor of I-15 between Temecula and Corona (in 1973-1974), the shared alignment became solely known as California 79, and the remnant alignment was given the new 371 designation. 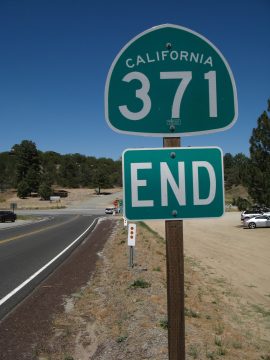 This end California 371 route marker is posted at the eastern terminus, where the state route meets California 74 in the San Bernardino National Forest near Mt. San Jacinto. Photo taken 06/07/08.