SR 905 is the connector between Interstate 5 near San Ysidro and the Otay Mesa Port of Entry (POE), with a connection to I-805, Otay Mesa and Brown Field. Formerly a mostly at-grade route, upgrades to limited access standards were made along the state route through the 1990s and 2000s as segments of freeway were funded and constructed along Otay Mesa Road. The final section of freeway opened to traffic on July 30, 2012, completing a high speed route from I-5 east to the Otay Mesa POE, the border crossing with Tijuana, Baja California, Mexico.

California State Route 905 can be divided into five segments: 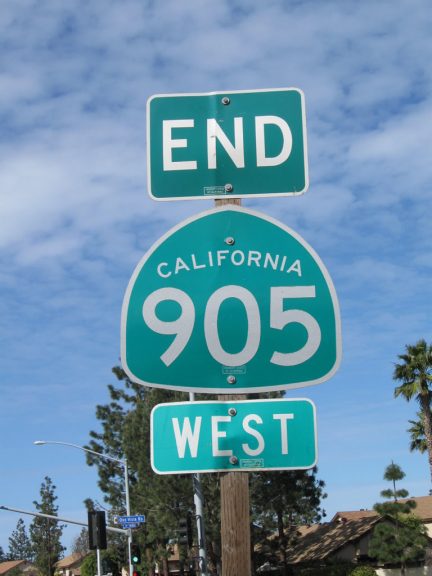 An end shield for SR 905 appears along the westbound off-ramp (Exit 1B) to Tocayo Avenue west and Oro Vista Road north. 02/21/11

In an agreement inked between the City of San Diego and Caltrans from 1998, the City paid to upgrade Otay Mesa Road to six lanes with turning lanes by the end of 1999, and Caltrans would maintain the road as a temporary state facility until the SR 905 freeway was built. Construction was completed in early 2000, and signs for SR 905 were erected shortly thereafter. 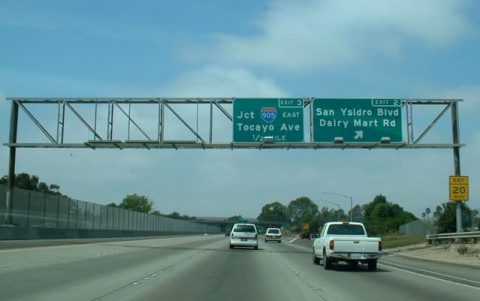 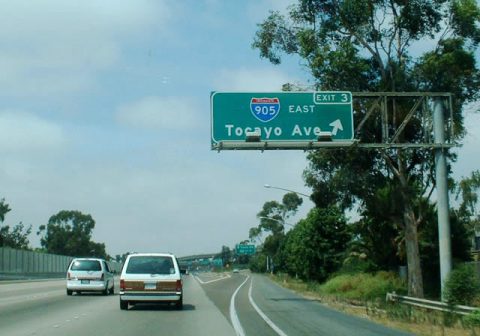 In a strange twist, the newly placed exit number signs along I-5 north for SR 905 in 2003 displayed Interstate 905 shields. These were amended by 2004.

Once the SR 905 freeway was completed it was to be redesignated as Interstate 905, per an agreement between the FHWA, Caltrans, and SANDAG.4,5 SR 905 was previously approved as an Interstate by AASHTO in 1984. Otay Mesa Road, which served as the temporary alignment of SR 905, was returned to city of San Diego control following completion of the freeway.6

With the opening of Segments 3 and 4, the following improvements were proposed for the corridor as defined by Caltrans:2

The controversy surrounding SR 905 was the completion of the missing freeway link of Segments Three and Four. City of San Diego officials constructed the interim expressway as a temporary fix to close the gap (until the final freeway alignment opened in July 2012). The original Otay Mesa Road was an under-developed City street that became California's busiest trade route with Mexico. People wanted Otay Mesa Road upgraded to expressway or freeway status for several reasons:

As a short-term solution, the City of San Diego and Caltrans appropriated $17 million in Fiscal Year 1998 to widen Otay Mesa Road to three lanes each way, add a concrete median and widen the shoulders. This was approved in December of 1994. The City and Caltrans hoped to begin work by 1995, but an Environmental Impact Study was required. Construction did not begin until August 1997, and it was delayed at several points. It was completed by late 1999/early 2000.

Funds to build the future SR 905 freeway (Segments Three and Four) were secured in the late 2000s. This allowed a new freeway to be built parallel to the existing Otay Mesa Road and provide six to eight lanes of traffic between Interstate 805 and SR 125. In August 1997, U.S. Representative (Pa.) Bud Shuster, chairman of the House Transportation Committee, visited the border region and pledged to help secure money to complete the SR 905 freeway. Route 905 was listed as a High Priority Corridor in BESTEA, the House-approved ISTEA Reauthorization bill, and it was finally added to the final TEA-21 bill signed into law in 1998.

Funding for the SR 905 freeway was difficult to obtain. In the mid-1990s, state and federal officials were not even sure whether to build a $130 million four-lane expressway or a $255 million six-lane freeway (figures from the 2000 SANDAG Regional Transportation Plan). The feasibility study and Major Investment Study for the SR 905 freeway were completed in spring 1998, and the Environmental Impact Study was made public in 1999.