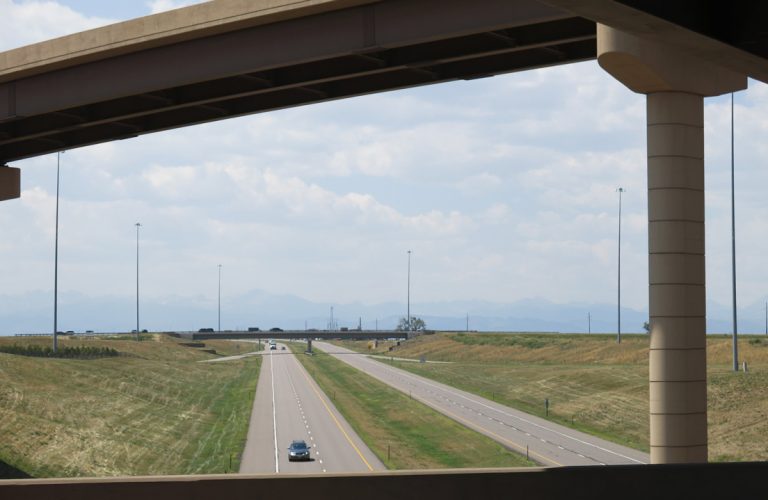 E-470 transitions into Northwest Parkway (SH 470N) at the systems interchange with Interstate 25 between Broomfield and Thornton, Colorado. 08/15/13

Operated by the E-470 Public Highway Authority, E-470 is the eastern half of the Denver Beltway. Inventoried by CDOT as Route 470B, the north-south roadway stretches 46.40 miles from Lone Tree in Douglas County to Aurora, Denver International Airport (DEN) and Broomfield in Adams County. The Northwest Parkway (Route 470N) is the 8.05 mile long extension of the tolled beltway from Interstate 25 west to U.S. 36 (Denver-Boulder Turnpike) at the Interlocken development in Broomfield. Both roads utilized all electronic toll collection (AET) with ExpressLane transponder or toll by plate.

Revenue shortages led to a number of delays and financing concessions for the E-470 Public Highway Authority through 1992. The original 48 mile plan for the beltway north from Lone Tree to I-25 and 160th Avenue to the north was revised to use a new alignment, partially on existing roads, to cut costs.3 Unveiled September 10, 1992, the adjusted course for E-470 supplanted Gun Club Road to the east of Aurora, with the existing road converted into a signalized frontage road. Saving $40 million in construction costs, E-470 used the preexisting interchange at Gun Club Road and I-70.4 This Breezewood type connection remains in use today.

Debate and controversy for the 10 mile segment of E-470 east of Aurora continued through 1993. Finally the E-470 Public Highway Authority finalized the route by a unanimous vote by July 1, 1993. This move was thought to allow construction to proceed on the 30 mile extension north from SH 83 (Parker Road).5 However funding woes and legal issues from opposition prolonged delays on the second section of E-470. The Colorado Court of Appeals cast aside objects from the Arapahoe County Commission for the proposed highway on March 24, 1994, allowing the realignment plan to go forward. Plans called for completion of E-470 from East 56th to East 120th Avenues and from SH 83 to Smoky Hill Road in December 1996, and the intervening gap in 1997.6

A $312 million design-build contract for the 30 mile portion of E-470 from Parker Road north was approved by the E-470 Authority on March 31, 1994. A lawsuit by two Arapahoe County Commissioners against the toll road however continued.7 The county eventually withdrew from the lawsuit in 1995 behind efforts of County Commissioners Polly Page and Tom Eggert, allowing construction to finally proceed.8 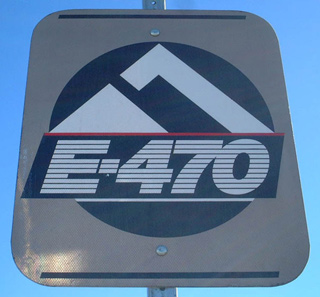 Unveiled in 1993, trailblazers for E-470 are unique to Colorado. The gray, white and black design portrayed the Front Range of the Rockies. Shields for the toll road were revised by 2015 with a simpler design on a white background. 02/03/02

The separate sections of E-470 totaling 17 miles, opened to traffic in Douglas and Arapahoe Counties respectively on July 1, 1998. The new legs operated as toll free roads for 30 days.9 The 12 mile link from DEN Airport and Aurora debuted to travelers on May 3, 1999. It was still somewhat incomplete, as E-470 utilized an at-grade section of Gun Club Road with traffic lights at Colfax Avenue, the ramps for I-70 and Smith Road.10

With 73% of transactions made by transponder, the entire 47 mile length of the E-470 beltway switched to all electronic tolling (AET) on July 4, 2009.14 The five main line toll plazas were removed.

A new diamond interchange (Exit 41) opened along E-470 at Quebec Street on November 24, 2014. Work on the $5 million projects started in Spring 2013.15 The E-470 Public Highway Authority authorized an $80 million widening project along the southeast leg of the toll road in February 2016. Expansion added a lane in each direction from Parker Road to Quincy Avenue. Construction ran from Spring 2016 to January 2018.16

Northwest Parkway extended the beltway system southwest from E-470 at Interstate 25 to U.S. 36 through Broomfield. The 11 mile long highway opened to traffic on November 24, 2003. Tolling on 9.5 miles of the parkway commenced on December 7, 2003.17 Further extension south through Golden encountered several hurdles over the ensuing decade. Known as Jefferson Parkway, the final leg of the western beltway will overlay portions of SH 128 and SH 93 south to Golden.