Clark Street crosses paths with U.S. 13 at a split intersection with Dupont Highway by several traveler services and a shopping center. SR 14 (Milford Harrington Highway) continues east from Harrington through a mixture of farm land and large lot subdivisions to Marvels Crossroads and Church Hill Village. The route veers southward ahead of SR 15 on the approach to Milford city limits.

SR 14 arcs across the Kent County side of Milford.

Through Milford, SR 14 follows NW Front Street by an number of industrial businesses to the commercialized intersection with U.S. 113 (Dupont Boulevard). Beyond U.S. 113, Front Street curves by Silver Lake and narrows across the Milford street grid. SR 14 intersects Walnut Street north of Downtown and follows NE Front Street for the remainder of its route to SR 1 Business (Rehoboth Boulevard) and the Milford Bypass. 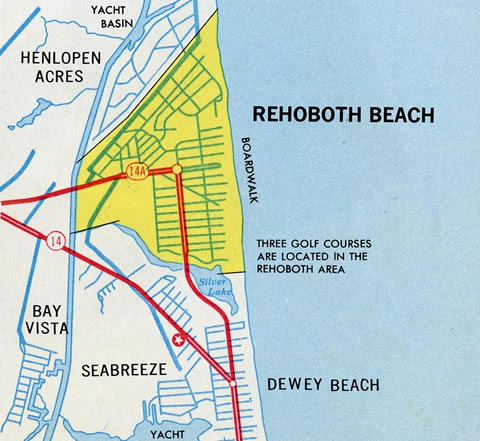 The 1936-37 Official Delaware Highway Map outlines SR 14 along the same alignment it takes today, from Burrsville east to Rehoboth Boulevard in Downtown Milford. The route extended south along Rehoboth Boulevard in Milford along the current alignment of SR 1 to Five Points, where it combined with SR 18 east to Wescoasts Road. Wescoasts Road turned the route back south to Lewes and Rehoboth Road to Midway. This alignment was later replaced with the dual Coastal Highway.

Lewes and Rehoboth Road took SR 14 southeast to Rehoboth Beach, where the route followed Rehoboth Avenue east and 2nd Street south to Silver Lake and Dewey Beach. This later became SR 14A and is now SR 1A. The Coastal Highway bypass of Rehoboth Beach was constructed by 1942.

The north-south alignment of SR 14 was renumbered as SR 1 in April 1974. The change was made in anticipation of a long range plan to extend the route north to the Delaware Turnpike. 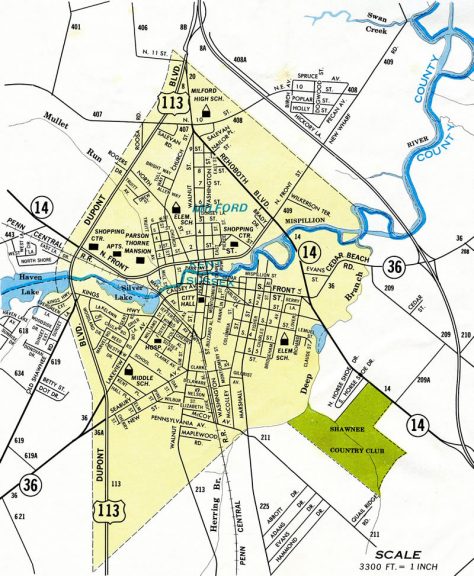 SR 14 through Milford and the completed Milford Bypass.
Sources: