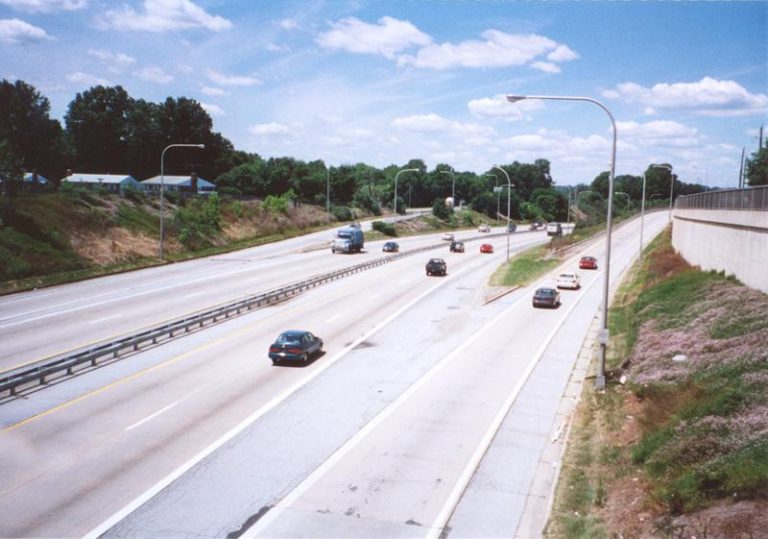 Looking north at the Newport Freeway from Burnside Boulevard in June 2000.

SR 141 encircles the city of Wilmington between New Castle and Fairfax, partially as a limited access highway through Newport and Greenville. Commissioned in 1952, the state route mostly acts as a commuter route between New Castle, Newport, Prices Corner, Greenville and Fairfax. The majority of SR 141 accommodates four lanes with some access control.

Beginning at the junction of SR 9/273 in New Castle, SR 141 follows Basin Road, a four-lane arterial, northward to an antiquated cloverleaf interchange with U.S. 13/40 (Dupont Highway). Exit ramps to Dupont Highway are assigned as Exits 1A/B, despite Basin Road traveling at-grade in both directions.

U.S. 202 begins an eight-state route at the SR 141 (Basin Road) exchange with U.S. 13/40. The US Highway was realigned from an end in Wilmington and extended south along I-95 and SR 141 in 1984, though signs are inconsistent and the designation is mostly ignored by locals, traffic reports, etc. U.S. 202 overlaps with SR 141 for 1.6 miles between Dupont Highway and Interstate 95 (Exit 3A).

Basin Road separates New Castle County Airport (ILG) and the community of Wilmington Manor northward to SR 37 (Commons Boulevard). This stretch was reconfigured by winter 2005 with the closure of the Delaware and Pennsylvania Avenue intersections with Basin Road and the addition of a U-turn at a new intersection with Washington Avenue. Previously Delaware and Washington Avenues provided the connection from SR 141 north to Dupont Highway south.

Additional work on Basin Road included the rehabilitation of the overpass above U.S. 13/40 and a variety of changes northward to Jay Drive. Improvements included repaving the original concrete roadway with asphalt, sidewalk construction, traffic signal timing adjustments and other safety improvements. An acceleration lane was also added for the ramp carrying drivers from Dupont Highway south to Basin Road north in place of the previous Delaware Avenue turn off (former Exit 1B). All related work was slated for completion by August 2004.1

North of SR 37 and the Corporate Commons business park, the roadways of SR 141 diverge ahead of Nonesuch Creek and Airport Road west. The state route transitions into a limited access highway through a large cloverleaf interchange with I-95, I-295 and I-495. Ramps are assigned as Exit 2 for I-295 north and Exits 3A/B for I-95 and I-495.

The SR 141 overpasses across I-95 and I-295, and several of the ramps at their exchange, were rehabilitated between 2000 and 2001. SR141 and I-95 Ramps G&F Improvements construction underway from Winter 2016 to October 2018 redesigned a portion of the ramp system within the cloverleaf interchange. 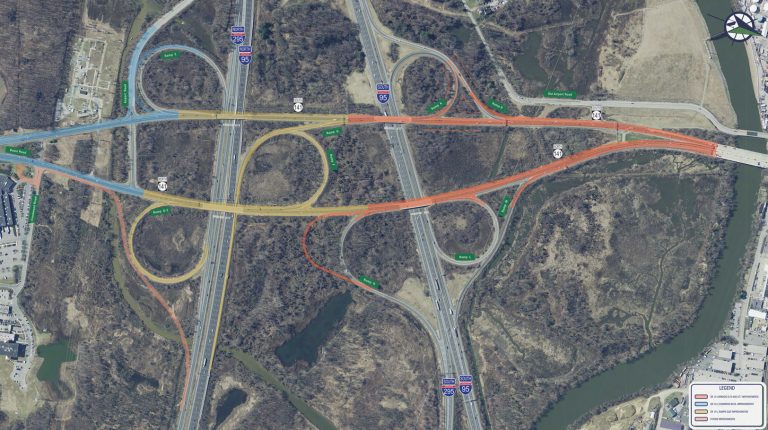 Continuing work through Spring 2022 expands SR 141 to three lanes in each direction, replaces the four SR 141 bridges over I-95, and further realigns ramps, including the I-295 southbound ramp to the Newport Freeway northbound. Work also rebuilds the intersection with SR 37 (Commons Boulevard). Future work will add a new ramp from SR 141 (Basin Road) north to I-295 north.

Constructed between 1971 and 1979, the Newport Freeway passes through the town of Newport along a combination of viaduct and below-grade roadway. Built to relieve congestion along Newport Gap Pike (old SR 41), plans for the limited access freeway originated in 1961.2 Accommodating four lanes of traffic, with auxiliary lanes between on and off-ramps, the freeway leads SR 141 north to a directional cloverleaf interchange with SR 2 (Kirkwood Highway) at Prices Corner.

Beyond Prices Corner, SR 141 downgrades into a boulevard along Centre Road between several older subdivisions and apartments. Speed limits reduce to 35 miles per hour. The state route north to SR 34 (Faulkland Road) was rebuilt from an undivided arterial with narrow lanes and adjacent frontage roads into a divided roadway with 12 foot travel lanes and 11 foot wide shoulders. Work ran through November 9, 2010 and included property acquisition on the east side to accommodate the realignment of local roads and the addition of a multi-use path.

SR 141 north from Prices Corner to Greenville was formerly proposed for upgrades to limited access standards. A visible remnant from the canceled plan was a concrete stub at the north end of the collector distributor roadway for SR 2 (Exits 6A/B). This was eventually incorporated into the rebuilding of Centre Road.

SR 141 (Centre Road) passes west from the Dupont corporate campus as a controlled access arterial between Faulkland Road and Barley Mill Road. Access to the four-lane highway is limited to two signalized intersections and the junction with SR 48/100 (Lancaster Pike). 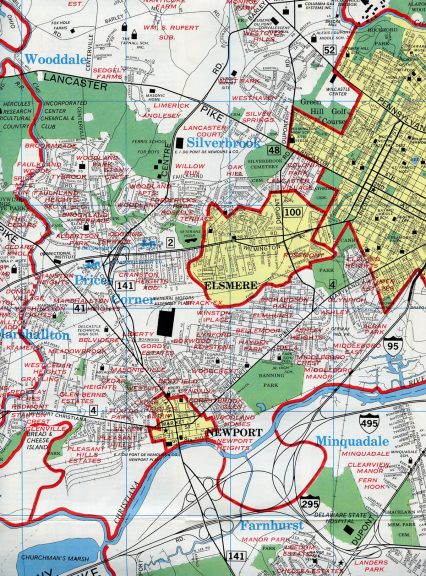 1972 map of New Castle County showing the interchange between SR 2 (Kirkwood Highway) and 141.

SR 141 upgrades again into a controlled access expressway from the Dupont Experimental Station east to the intersection of Childrens Drive and Powder Mill Road. The state route curves southward by the AstraZenica corporate campus to end opposite SR 261 (Foulk Road) at a grade separated intersection with U.S. 202 (Concord Pike).

The easternmost extent of SR 141 was slowly upgraded through a series of projects. Constructed first was an underpass built for Rockland Road. Completed in 1998, it coincided with the opening of a new access road (Childrens Drive) from SR 141 west to Rockland Road and Dupont Childrens Hospital. Subsequent work realigned SR 141 (Powder Mill Road) southward to accommodate the new AstraZenica campus. That stretch was decommissioned in 2007 with construction of SR 141 Spur, a new four-lane roadway built in conjunction with the Blue Ball construction projects.

The Newport Freeway, and the short stretch of limited access highway along SR 141 at Greenville, were two portions built for the planned beltway between I-95 near Newport and U.S. 202 at north Wilmington. The freeway was incorporated in the 2010 transportation plan for New Castle County issued in 1990, and still in formal plans by 1992. Interchanges planned for the route included exchanges with SR 48 (Lancaster Pike), SR 100 (Montchanin Road), Alapocas Road and U.S. 202 (Concord Pike). Additionally upgrades were slated for the cloverleaf interchange joining Interstate 95 and U.S. 202, and Concord Pike north to Blue Ball and Fairfax.

With five of the state's seven largest employers situated along the SR 141 corridor, plans were unveiled in 1992 for several upgrades along the state route. DelDOT chief design engineer C. David Jamison commented that the department was committed to upgrading the SR 141 corridor in an effort to offset the build-up of traffic on local area side roads and outer roads in northern New Castle County. Details of the $100 million plus freeway plan with tentative contract award dates:5 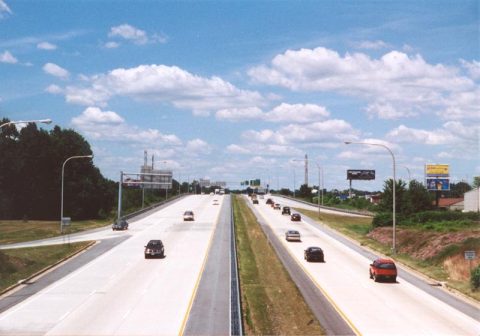 Replacement of the two-lane Tyler McConnell Bridge called for a six-lane bridge positioned 25 feet higher than its predecessor. This garnered vehement opposition, with critics citing that the new span would harm the rustic nature of the Brandywine valley and effect the nearby historic Hagley Museum. Planners were asked to reduce the span initially, and then to instead upgrade the existing bridge. Community opposition also arose against the remainder of the SR 141 freeway plan, eventually leading to its cancellation. However some elements of the original plan were incorporated into later upgrades along the state route, such as the Rockland Road underpass near Fairfax.

The Centre Road portion of the SR 141 upgrade was cost prohibitive due to property acquisition needs and adjacent dense development between SR 2 (Kirkwood Highway) and SR 34 (Faulkland Road). A subsequent improvement plan called for a more subtle expansion of Center Road, with the addition of a continuous center turn lane. The stretch was eventually expanded with a narrow median and shoulders. 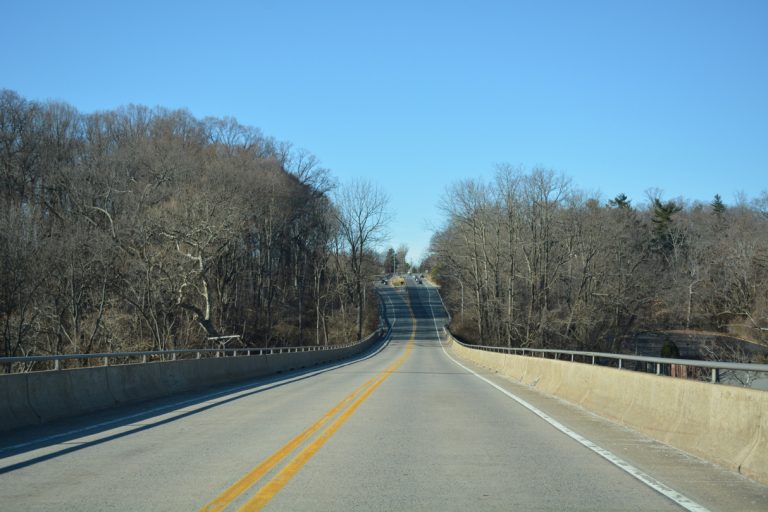 Plans for the Tyler McConnell Bridge originated in 1948 when the DuPont Company announced the location for its experimental station along the banks of the Brandywine Creek. Dupont contributed $250,000 toward construction of the new bridge in an effort to enhance access to the site. Two design types were considered for the crossing, a steel arch bridge and a metal-girder bridge.4

With the more economical metal-girder bridge design selected, construction got underway in February 1951. Opened to traffic in December 1952, the Brandywine Creek bridge was dedicated in April 1953 after a former member of the Delaware State Highway Commission, J.H. Tyler McConnell. The span featured some of the earliest uses of reinforced concrete hammerhead pier supports, a popular design used throughout the world today.4

Prolonged traffic congestion associated with the Tyler McConnell Bridge continued to fuel discussion for either replacing it or adding a second span. Proposals under consideration in 2003 included an option to add a companion metal-girder bridge alongside the current span. Replacement designs varied from building two new variable depth concrete-girder bridges, or a single four-lane elliptical arch bridge. Bridge aesthetics factored heavily in these options in an effort to maintain the historic character of the Brandywine valley.

A fifth option arose following input from public workshops and feedback received regarding the previous alternatives. It called for a four-lane multiple parabolic bridge design in place of the existing span. Cost estimates for the alternatives at the time ranged from $26 million for the companion bridge concept, and $40 million for the multiple arch bridge.3 The intervening years revealed no progress on plans for either expansion or replacement of the Tyler McConnell Bridge.