The Escambia Bay Bridges of Interstate 10 were the only original spans along Interstate 10 in Escambia and Santa Rosa Counties not replaced by late 1990s and early 2000s upgrade projects. Built during initial construction of the freeway between 1962 and 1967, the bridges rose just 12 feet above the bay. 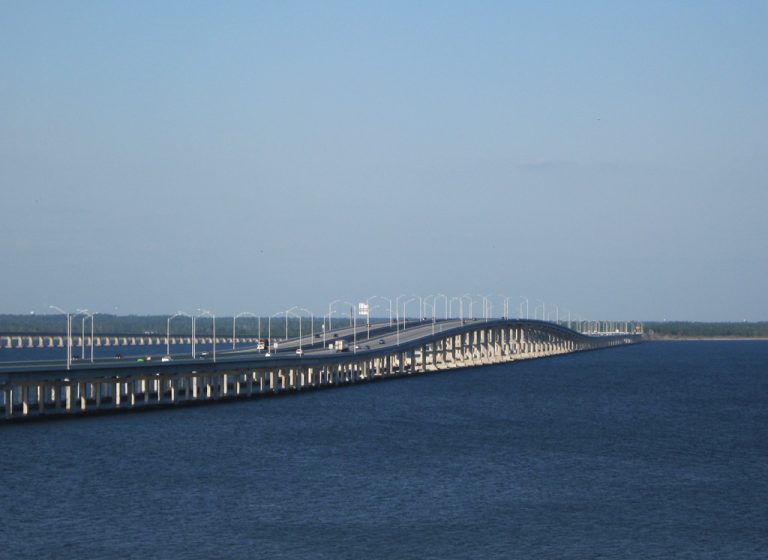 Hurricane Ivan made landfall between Fort Morgan and Gulf Shores, Alabama in southern Baldwin County on early Wednesday morning September 15, 2004. The category 4 storm made landfall on the Gulf Coast with 130 mile per hour sustained winds and storm surges varying between 10 and 15 feet. The storm was traveling north northeast at the time of landfall, thus putting the northeast quadrant of the hurricane and eye wall across both Baldwin and Escambia Counties. The land falling storm caused extensive property damage, washed out area roads, took a number on the environment, and claimed countless lives. Impacts from the major hurricane disrupted travel along Interstate 10 for two years.

The bridges that carry Interstate 10 travelers over Escambia Bay suffered tremendous damage from the storm surge of Hurricane Ivan. High waters pushed 58 spans off the east and westbound spans into the brackish waters below and shifted an additional 66 segments out of alignment.1 Both spans were closed due to the land falling hurricane, resulting in major detours to the north.

Emergency repairs reopened the westbound span for traffic at 6:30 AM on Tuesday October 5, 2004.3 That bridge provided Interstate 10 with one lane of capacity per direction. Work continued at a rapid pace to reopen the eastbound crossing on November 27, 2004, with a capacity of one lane. The structural integrity of both spans remained in question and high load bearing vehicles and permit loads were prohibited from using either bridge. 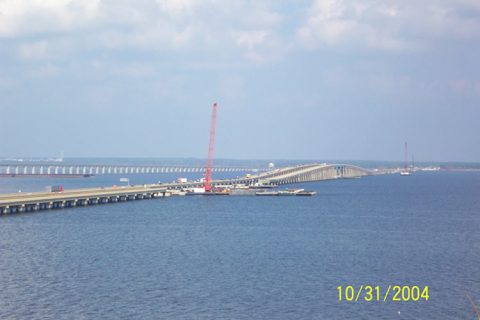 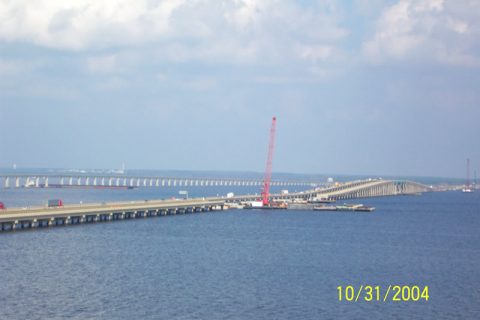 The westbound bridge carrying I-10 across Escambia Bay carried two-way traffic while repairs were underway along the eastbound span. 10/31/04

Gilbert Southern Corporation of Sunrise, Florida won the $26.5 million repair contract to fix the westbound span across the Escambia Bay. The contractor completed the job in 18 days; six days ahead of schedule. Work commenced on September 18, 2004 and the contractor received $1.5 million in bonuses for the early completion.2 Work involving the eastbound bridge followed. That construction was slated to take at least 90 days with an anticipated completion in late December 2004. Contractors beat that time table with a quick reopening on November 27, 2004.

Damage to the eastbound span was more severe than first thought and it was unclear as to whether or not the bridge would be able to accommodate two lanes of travel. Plans to repair the bridges with temporary metal spans were abandoned due to the amount of materials required and the excessive loads that two lanes of traffic would entail. Furthermore the loads on the westbound span were thought to be too much for the bridge to carry. Thus it was only practical to believe that both bridges would carry just one lane of travel per direction with a full shoulder for emergency vehicle usage. All of this led officials to seek money for a replacement span for the ailing bridges.4

In January of 2005, FDOT awarded a contract to a design-build team for the construction of replacement spans. Construction commenced immediately thereafter on a new four-lane span to carry two lanes of Interstate 10 in each direction. The original timetable looked to have at least one new span opened by the end of 2006--which occurred December 19, 2006. At that time construction continued on a second span to increase the number of lanes for Interstate 10 from four to six over Escambia Bay. That work continued with an anticipated completion date of November 2007--the bridge opened December 12, 2007. Additional details can be found at the AARoads Blog: Bridging Escambia Bay, Florida (March 14, 2007).

In June of 2005, construction was underway involving pile testing and other "groundwork" for the first replacement span. Traffic on the existing spans was relegated to just one lane with strict weight restrictions in place. Tractor trailers that used the span were required to enter make shift weigh stations regardless of direction travel. In addition, two single-lane metal spans were used along the eastbound bridge. These connections replaced sections of the bridge that were completely destroyed by Ivan. Due to the temporary nature of the metal crossings, tractor trailers were required to span the bridges one at a time. That coupled with a 15 mph speed limit resulted in 15-90 minutes of extra travel time per motorist during the busiest times of day.

Fortunately, the restrictions and long-distance detour for overweight vehicles ended on December 19, 2006 when contractors opened the newest Interstate 10 bridge. With both spans opened by December 12, 2007, motorists now notice an unusual kink along the spans that ties them into the original Interstate 10 footprint below U.S. 90 (Scenic Highway). The curve was a design element required in order to keep I-10 open during the two-year construction period for the new bridges. Locals dubbed the new span the "Crooked Bridge" because of the bridge jog.