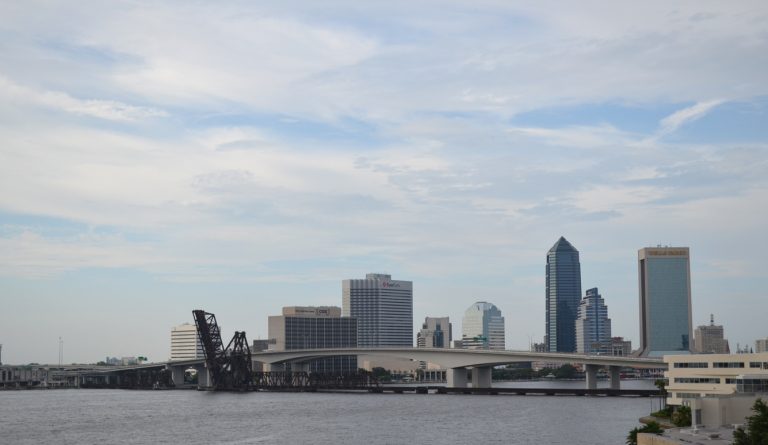 The Acosta Bridge takes State Road 13 across the St. Johns River between the South Bank District and LaVilla on the west side of Downtown. 06/16/16

County Road 13 and Florida State Road 13 mirror the course of the St. Johns River north from near Hastings to the Acosta Bridge outside Downtown Jacksonville. The state road initially runs concurrent with SR 16 for 3.998 miles, from CR 13 near Sixmile Creek to the east end of the Shands Bridge across the St. Johns River. SR 13 takes a winding course from there 13.30 miles to the Duval County line, and 15.64 miles through Southside Jacksonville to the north end of the Acosta Bridge.

SR 13 branches northwest from SR 16 ahead of the settlement of Orangedale. Generally staying close to the east banks of the St. Johns River, the state road progresses north to Rivertown, a 4,170-acre development slated for up to 4,950 residences.1 There a roundabout was constructed between Fall 2012 and February 2013 with River Town Boulevard, the main entrance to the master planned community. A second roundabout added in the Fall of 2017, joins SR 13 with the entrance to the RiverClub, the the St. Johns riverside amenity center for Rivertown.2,3

Approaching Downtown Jacksonville, State Road 13 takes a stair stepped alignment between Interstate 95 and the Acosta Bridge. Pruential Drive leads the route west from Hendricks Avenue to San Marco Boulevard, which connects north with an on-ramp to the Acosta Expressway spanning the St. Johns River. The directional T interchange at the north end of the bridge links with Riverside Avenue south at Broad and Jefferson Streets, the former alignment of U.S. 17 and SR 211.