A cross-peninsula highway between U.S. 19 at Weeki Wachee and U.S. 1 at Titusville, Florida State Road 50 links the Orlando area with Brooksville, Clermont, and the Space Coast. SR 50 along Colonial Drive constitutes the main east-west arterial through Orlando, as is the state road along Cortez Boulevard through Hernando County and Brooksville.

With the exception of SR 50 between U.S. 98 at Ridge Manor and Groveland, all of the 114-mile route carries at least four overall lanes. Within Hernando County, A $3 million project anticipated for 2019 will four-lane the state road east from U.S. 98 to U.S. 301. Additional work in 2019 will expand Cortez Boulevard to six overall lanes from Windmere Road east to U.S. 98 (McKethan Road).

Those projects follow previous expansion along SR 50 between U.S. 19 and SR 589 (Suncoast Parkway). Costing $58 million, the six-lane project ran from October 2012 to October 2015.1 Widening of I-75 from Cortez Boulevard north to the Sumter County line includes adding a lane along a 0.4-mile segment of U.S. 98 & SR 50 through the exchange with Interstate 75. The $95 million project through fall 2019 also upgrades the diamond interchange with Cortez Boulevard into a single point urban interchange (SPUI).2 Future work will add a flyover from the freeway north to SR 50 west.

Other portions of SR 50 (Cortez Boulevard) across Hernando County will be six-laned. Those include from SR 589 east to SR 50A, and the south bypass of Brooksville. Long range plans call for adding capacity to SR 50 east from U.S. 98 to SR 471 as well. 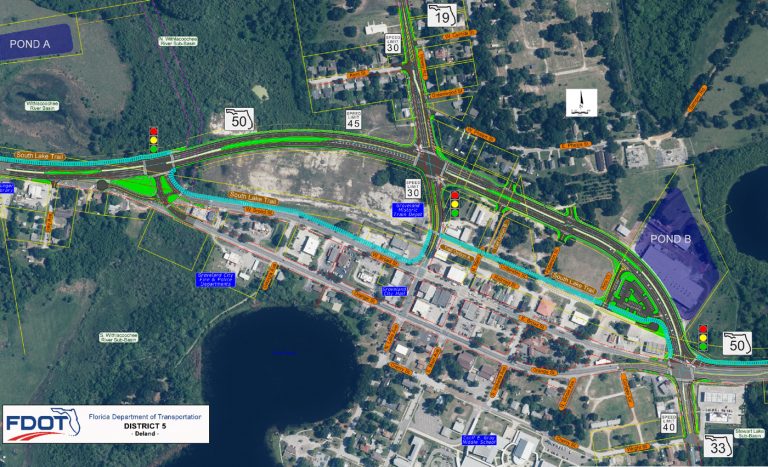 Design work for a realignment of SR 50 around Downtown Groveland was completed in May 2017. Intended to better serve truck traffic across the city, the 1.6 mile long project included redesigning SR 50 east from County Road 565 (Villa City Road) to Brown Street. The bypass will loop north of the one-way couplet of SR 50 along Broad Street. Right of way acquisition and construction for project 427056-1-52-01 was not funded as of Fall 2018.

The diamond interchange connecting SR 50 with U.S. 27 at the city of Clermont was reconstructed into a cloverleaf interchange. The $20.8 million project widened both roadways from four to six lanes, and added collector distributor lanes along U.S. 27 for the new ramp system. The upgrade was completed in Fall 2013.3 This work precede separate expansion projects reconstructing SR 50 from four to six lanes between Grand Highway and Hanock Road in Clermont, and Hancock Road and Florida's Turnpike in western Orange County. The respective $4.7 million, 1.120-mile and $17.8 million, 1.370-mile projects wrapped up in Early 2012.4,5

The 3.060-mile section of SR 50 (West Colonial Drive) between Avalon Road (CR 545) and SR 429 (Western Beltway) was upgraded from a five-lane rural roadway into a six-lane divided arterial by Fall 2011 at the cost of $16.9 million.6 Subsequent construction completed in Spring 2014 expanded another 1.270 miles of SR 50 between the exchange with Florida's Turnpike at Oakland and Avalon Road at the cost of $7.3 million7 Project 239535-3 widened 2.560 miles of SR 50 from SR 429 (Western Beltway) to West Oaks Mall, just east of Clarke Road. Costing $42.6 million, the project added a travel lane in each direction in addition to bike lanes and sidewalks. Work started in May 2015 and was completed in Spring 2018.8

East of Orlando, improvements along SR 50 included reconstructing the roadway from four to to six lanes and replacing the bridges across the Little Econlockhatchee River. The 1.040-mile expansion between The Greenway and Dean Road cost $18.8 million and was finished in Summer 2010.11A $68.3 million project expanded a 4.910 mile section of SR 50 (East Colonial Drive) between Dean Road and Avalon Park Boulevard. Colonial Drive was rebuilt into a six-lane arterial with various intersection improvements made and bike lanes and side walks added. Work ran from January 2014 to January 2017.12

SR 50A acts as a business loop for SR 50 through the city of Brooksville in Hernando County. The state road overlaps with portions of U.S. 41 and U.S. 98 through Downtown.