State Road 56 is a six-lane arterial connecting Interstate 75 with SR 54 west and Meadow Pointe Boulevard across southern areas of Wesley Chapel in Pasco County. A heavily traveled commuter route, completion of SR 56 was a catalyst for rampant commercial development, including the Tampa Premium Outlets, and expansion of suburban development eastward along areas north of the Hillsborough County line. A $58 million project started in February 2017 extended the state road six miles east to U.S. 301. It opened to traffic on the morning of July 10, 2019. A number of development projects, including the 3,500-acre Two Rivers Ranch, were planned for the new roadway to the southwest of Zephyrhills.1

Additionally, a $37.4 million project underway from January 2019 to Summer 2022 rebuilds the diamond interchange with Interstate 75 into a diverging diamond (DDI). This is expected to alleviate some of the traffic congestion plaguing the current exchange.2 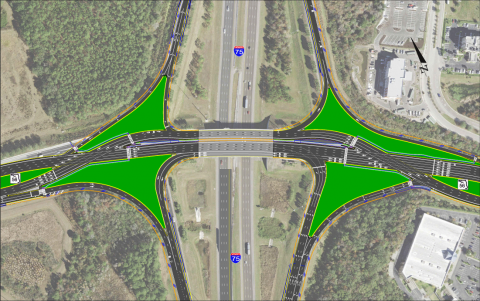 The corridor for SR 56 was incorporated in the 1982 Pasco County Comprehensive Plan.3 Initially considered by FDOT as the new alignment of SR 54 (with the old one referenced as SR 54A), the study for a second east-west roadway focused on undeveloped areas of southern Pasco County, between I-75 at Cypress Creek and U.S. 301 near Zephyrhills South. It included four-lane expansion of a 0.76-mile section of U.S. 301 leading northeast to CR 535 (Chancey Road), the Zephyrhills East Bypass. The new alignment evaluated comprised a six-lane, divided highway with a 50-foot grassed median within a 250 foot wide right-of-way.3