Multi-lane construction of SR 79 is nearly complete along the state road north from U.S. 98 (Panama City Beach Parkway) to Interstate 10. Through Washington County, construction on a four-phase project started in Fall 2014:1

Work on the 20.085-mile long expansion through Washington County wraps up in Fall 2020. The design-build project cost $96.788 million. 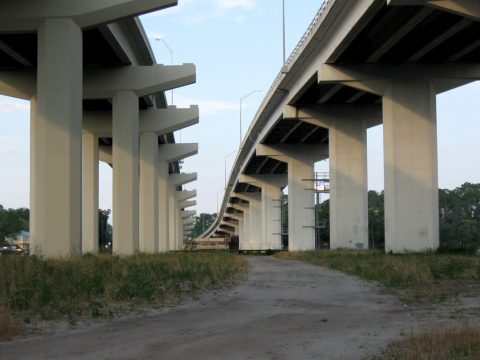 Southward view of the B.V. Buchanan Bridges from a segment of Old Highway 79. Provisions were built into the 2008-crossing to accommodate future expansion of SR 79. Photo taken 06/12/09. 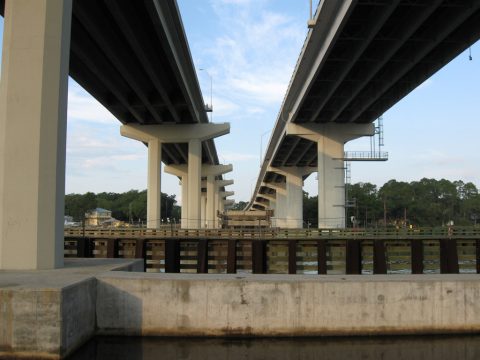 A portion of the original SR 79 ICWW bridge remains below the two fixed spans of the B.V. Buchanan Bridge. The northbound span is slightly shorter than its 2,700-foot long predecessor. Photo taken 06/12/09.

Four-laning of SR 79 through Bay County completed in late 2009 included construction of a second bridge over the Intracoastal Waterway. The 0.9-mile long span and a half mile of roadway cost $42.1 million to build. A ribbon-cutting ceremony marked completion of the crossing on November 5, 2008.2

The $27.2 million contract for SR 79 widening north from Steelfield Road to the Pine Log Creek Bridge was awarded in June 2007. A subsequent $9.23 milliong contract on a 2.6-mile section between the West Bay Bridge and Steelfield Road was awarded in June 2008. Work there commenced on July 21, 2008.3 Further improvements were made at the West Bay bridge and the adjacent intersection where SR 79 meets SR 388 in 2013. The $1.9 million upgrade included adding sidewalks and bike paths to the B.V. Buchanan Bridge, adding traffic lights at SR 388, and street lighting.4