The Southside Connector consists of a 2.9-mile freeway linking the east end of Arlington Expressway (SR 115) with the south approach to the N.B. Broward Bridge (Interstate 295) across the St. Johns River. The suburban type freeway primarily serves as a commuter route from Interstate 295 toward Arlington and Downtown.

The Southside Connector originally consisted of a direct link between SR 9A and the Dames Point Bridge south to U.S. 90 Alternate (Southside Boulevard). There were no ramps at Merrill Road, a diamond interchange joined the route with Regency Square Boulevard and the south end consisted of 1982-built overpasses above the Arlington Expressway east end with no direct access between the two freeways.

The Jacksonville Transportation Authority envisioned improvements to the Southside Connector as part of the Regency Bypass project. Named for the adjacent Regency Square Mall at Arlington Expressway during the design phase, the project included upgrades to the entire Southside Connector. Construction was partially funded from a 1997 bond package1 and the Better Jacksonville Plan approved by voters in 2000.2 That plan earmarked $251 million for construction of 12 interchanges across the city.

Work included a $12.4 million contract for the interchange at Regency Square Boulevard, which coincided with the privately financed extension of Tredinick Parkway west from Monument Road to the Southside Connector service roads. Completed in summer 2005, this work modified the exit at Regency Square Boulevard into a folded diamond interchange and added new ramps for Tredinick Parkway.

Further north and completed by June 2005, were the bridges carrying SR 113 over Merrill Road. This work was followed by ramp construction to November 2005. Construction reconfigured the southbound ramp for Merrill Road to access eastbound only, as a new ramp from adjacent SR 9A was added for westbound.3 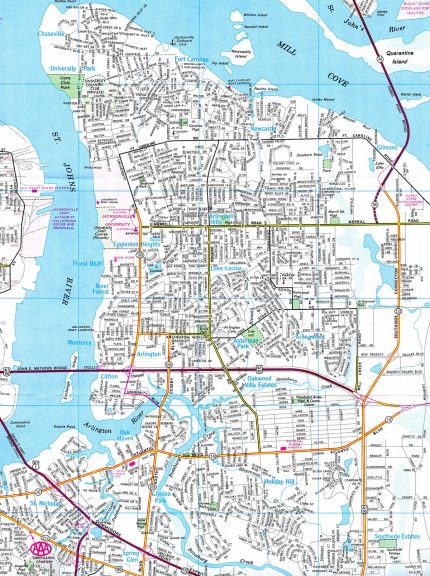 The Southside Connector provided the lone access point to the Dames Point Bridge from the south in 1989. Outside of the interchange with New Regency Square Boulevard, the state road traveled at-grade.

The last aspect of the Southside Connector built were the two flyovers linking SR 113 with SR 115 (Arlington Expressway) by Regency Square Mall. A 29 foot high flyover takes motorists from SR 113 south to SR 115 north and a 60 foot high flyover shuttles drivers from SR 115 south onto SR 113 north. These ramps were scheduled for completion in mid-2006 as part of a $28 million contract to reconstruct the overall exchange between the two freeways.1 The northbound flyover for the Southside Connector finally opened to traffic on August 17, 2007, followed by the southbound flyover the following day. Work on the project commenced in January 2004 and cost of $32.7 million overall.4