Florida State Road 228 separates into two sections in northeast Florida. The western branch links U.S. 90 in the city of Macclenny with Interstate 10 in Baker County for a distance of just 1.93 miles. The eastern segment travels 30.61 miles wholly within the city of Jacksonville, from U.S. 301 at Maxville to U.S. 90 (Beach Boulevard) at the Hogan community. The two are connected by County Road 228 (Maxville-Macclenny Road). A second segment of Baker County Road 228 extends north from the SR 228 west end along 5th Street in Macclenny, 1.2 miles to SR 121 at CR 23B.

Changes were made to the route of SR 228 in conjunction with the relocation of U.S. 17 around the Riverside and Brooklyn neighborhoods west of Downtown Jacksonville. U.S. 17/SR 228 combined along a one-way couplet of College Street (west) and Post Street (east) through Riverside to Margaret Street. Post Street carried the pair with two-way traffic to Riverside Avenue (SR 211), which directed the routes northeast through Brooklyn to the Acosta Bridge north end and Broad Street. Broad Street north to the couplet of Bay and Water Streets east completed the route to U.S. 1/90 (Main and Ocean Streets) in Downtown.

The realignment of SR 228 made by 2006 redirected the route south from Post Street along SR 129 (McDuff Avenue) to U.S. 17 at Roosevelt Boulevard. There it combines with U.S. 17 northward onto the Roosevelt Expressway, I-10 east to Interstate 95 north, and Union Street. Union Street takes U.S. 17 north, U.S. 23 south and SR 228 east to U.S. 1 (Main Street). There U.S. 23 ends and SR 228 turns south with U.S. 1 to Monroe Street east. Ocean Street north and State Street west carry the westbound direction of SR 228 as part of the respective couplets.

Prior to April 2020, SR 228 followed the one way couplet of Monroe and Adams Streets between U.S. 1/90 (Main / Ocean Streets) and the west leg of the Hart Bridge Expressway. The elevated freeway ran south of the Jacksonville sports complex, which is home to VyStar Veterans Memorial Arena, 121 Financial Ballpark / Bragan Field, and TIAA Bank Field. The remainder of SR 228 east along the freeway was unsigned. 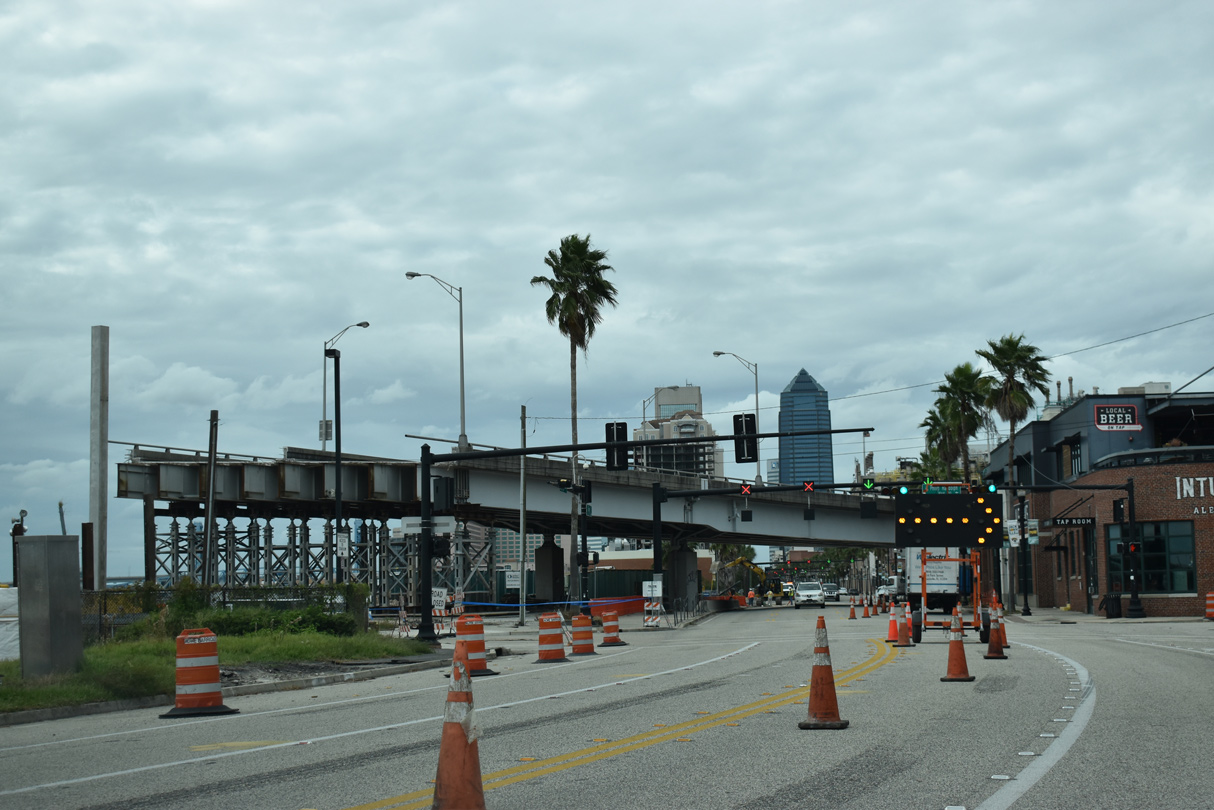 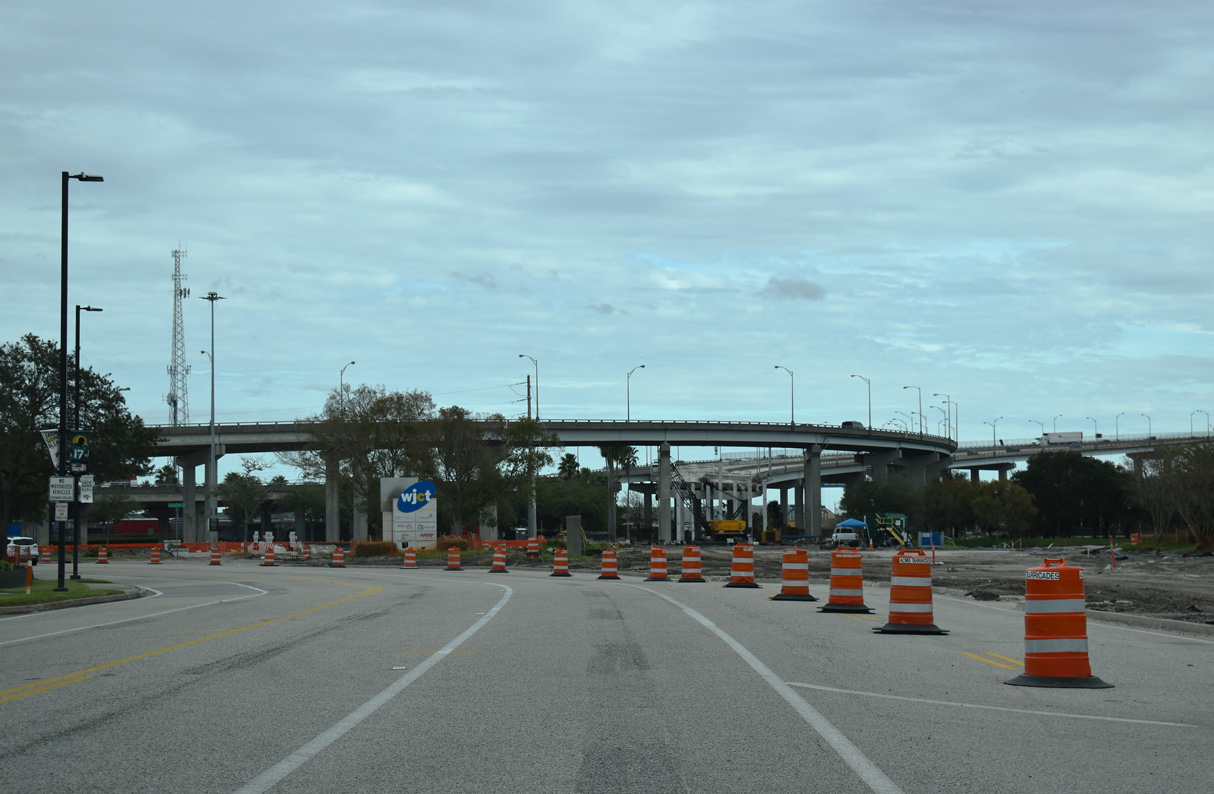 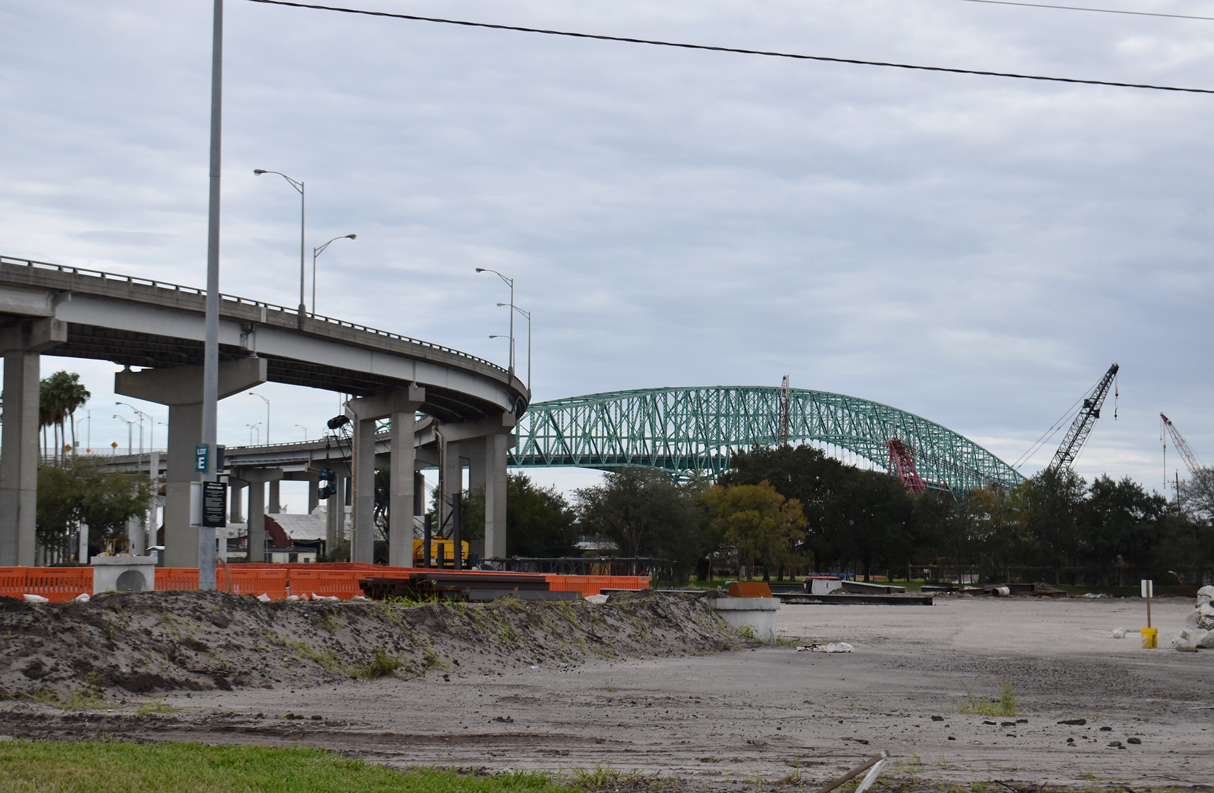 Costing $25.4 million, demolition of an elevated section of the Hart Bridge Expressway, from A. Philip Randolph Boulevard east to U.S. 1 Alternate on the Hart Bridge, commenced in April 2020. The elevated roadway closed on April 4 as the 18 month project got underway. The removal of the expressway supports a $2.5 billion redevelopment of the Shipyard properties and Lot J near TIAA Bank Field (home of the Jacksonville Jaguars) and Metropolitan Park.1

The Isaiah David Hart Bridge, spanning the St. Johns River between Midtown and Empire Point, is a part of U.S. 1 Alternate, and solely signed as such. The Commodore Point Expressway leading east from the turn of U.S. 1 Alternate onto the Emerson Expressway, is unsigned as SR 228. Signs reference "TO U.S. 90 / Beach Boulevard" for eastbound and "TO Atlantic Boulevard / Hart Bridge / Downtown" for westbound.

Completed in 1967, the Commodore Point Expressway consists of a partially elevated freeway linking the Hart Bridge with Downtown to the west and U.S. 90 (Beach Boulevard) to the east. The name is used interchangeably with Hart Bridge Expressway, which also references portions of U.S. 1 Alternate north and south of the St. Johns River. Including the continuous steel through truss bridge across the river, the Commodore Point Expressway system incorporates 20 bridges.3

Baker County Road 228 (Maxville-Macclenny Road) was realigned westward to accommodate a 370 acre expansion of the adjacent Chemours titanium dioxide mine. Located southeast of I-10 and the city of Macclenny, the titanium dioxide mine is one of two in the United States. The company indicated that it nearly depleted the existing titanium dioxide supply, which occurs nationally in the area soil, at the previous mining site.4