Florida State Road 281 was originally a short route following just Avalon Boulevard north from Interstate 10 to U.S. 90 at Pea Ridge. The route was extended south when the Garcon Point Bridge across Santa Rosa Sound, between Garcon Point and Redfish Point near Oriole Beach, opened on May 14, 1999. SR 281 south of Interstate 10 is posted with Toll State Road markers. Prior to the completion of the Garcon Point Bridge, signs at the exchange with I-10 omitted SR 281 and instead displayed "Avalon Boulevard" only.

Overall State Road 281 was a two lane route with the exception of a short four lane stretch at Interstate 10. The first of a four segment project widening SR 281 southward from Pea Ridge to Interstate 10 commenced in August 2009. The northernmost 2.3 miles of the $33-million project, from north of the CSX Railroad bridge to U.S. 90, was completed by May 1, 2013. Work continued on the southern two sections to Winter 2014.1 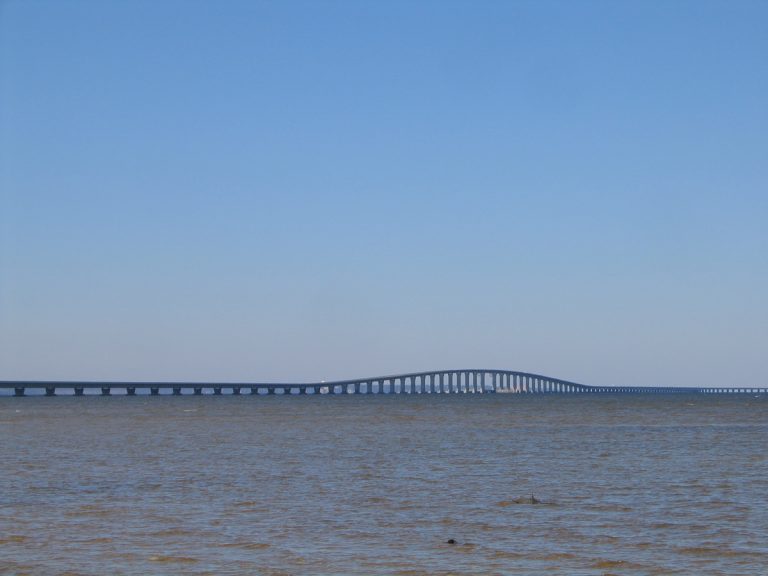 The Garcon Point Bridge northwest from Redfish Cove. Sweeping curves are a part of the 18,425 foot long bridge span, which elevates to a height of 65.6 feet. Photo taken February 9, 2006.

Costing $95 million to build, the Garcon Point Bridge links U.S. 98 in southern Santa Rosa County with Interstate 10 near Milton. The two lane span was constructed to both alleviate growing traffic concerns along the Three Mile Bridge (U.S. 98) across Pensacola Bay and to better facilitate hurricane evacuation traffic to I-10 and points northward. Tolls for the bridge are collected at a five lane plaza just north of Garcon Point. The toll collection point includes two SunPass lanes that allow account holders to proceed through the plaza at 25 miles per hour.

Planned since 1984 the bridge was initially nicknamed "Bo's Bridge" after former House speaker Bolley "Bo" Johnson. Johnson was a Milton Democrat and landowner in the Garcon Point area, who supported the bridge with legislation to form the Santa Rosa Bridge Bay Authority. He also circumvented state rules to get the authority a $8.5-million startup loan. Construction on the bridge took just 29 months, but with destruction of area wetlands and illegal dumping of concrete and other waste into the bay, resulting in $4 million worth of fines and restitution paid by the bridge contractor, Odebrecht-Metric. The bridge authority eventually paid for the environmental damage and Johnson was convicted of tax evasion in an unrelated case the same week the new bridge opened.2.

Early traffic counts were well below anticipated levels, 7,500 vehicles per day (vpd) as forecast by URS Greiner Woodward Clyde of San Francisco. That figure was needed to generate enough toll revenue to pay for the bridge at $2.00 per passenger vehicle. Actual counts however averaged around 4,000 vpd. URS admitted in 2000 that the projection was more of a guess. The agency remained the financial advisor for the bridge authority, eventually recommending raising tolls. Tolls subsequently increased to $2.50 in June 2001 and to $3.00 in 2004. These increases stymied traffic counts, which were recorded at just 3,844 vpd in 2011. With $90-million in bonds still unpaid, tolls were increased again to $3.50 in 2007 and to $3.75 by January 5, 2011.2 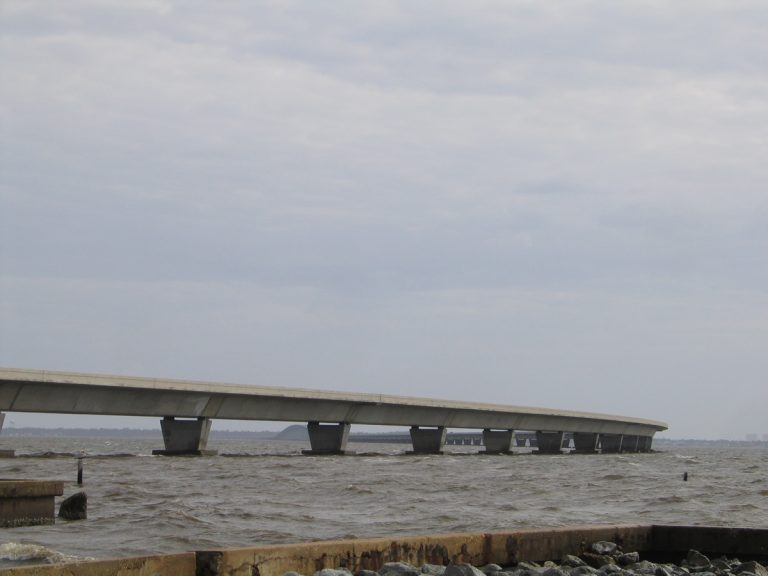 The northernmost extent of the Garcon Point Bridge across Pensacola Bay curves southwesterly from just east of Hernandez Point. Waters reach a depth of 24 feet at the navigation hump of the 40-foot wide bridge. Photo taken February 6, 2006.

Bo's Bridge was officially named the Garcon Point Bridge in March 1998. This name was selected over another proposal, the Santa Rosa Bay Bridge.3 Tolls on the bridge have been suspended during hurricanes to aid in evacuation and also due to other emergency detours, such as the closure of State Road 87 due to wildfires. This was the case from the time preceding the September 15, 2004 landfall of Hurricane Ivan to October 9, 2004 when Interstate 10 was restored to service across Escambia Bay.4 Another suspension of tolls took place on August 27 and 28, 2012 due to the potential landfall of Hurricane Isaac.