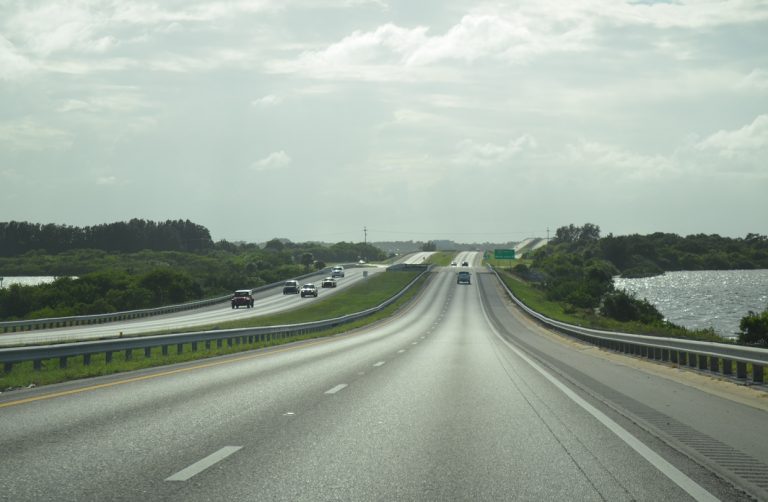 Florida State Road 404 follows 4.139 miles of Pineda Causeway, a limited access expressway spanning Indian River Lagoon and the Banana River between the town of Palm Shores and Patrick Air Force Base. The state road connects with U.S. 1 and Pineda Causeway extension at the west end and SR A1A at South Patrick Shores on the barrier island. Pineda Causeway west from U.S. 1 to Interstate 95 is a locally maintained arterial. The 0.451 segment between Wickham Road (CR 509) and the west side ramps with U.S. 1 is designated County Road 404. Pineda Plaza Way, the former alignment west 0.195 miles to CR 509, is also an unsigned branch of CR 404.

Pineda Causeway was proposed in 1969 to aid in traffic between Patrick Air Force Base and Kennedy Space Center. Completed in 1973 at a cost of $7.7 million, the expressway was a toll facility until 1989.1 The three mile extension west opened initially to Wickham Road (CR 509) by 2009, and then to an interchange with Interstate 95 in May 2011.2 Plans call for lengthening the roadway west from I-95 to the proposed extension of Stadium Parkway from Viera. A separate proposal outlines a new regional highway connecting Pineda Causeway with Orlando near Lake Nona as well.1

Road work underway from Summer 2018 to Fall 2020 repairs concrete at six locations along Pineda Causeway. The $3.9 million project fixes or replaces concrete tops of bridge seawalls between U.S. 1 and SR 513 (Patrick Drive).1 Also started is work on an overpass that will take Pineda Causeway across the Florida East Coast (FEC) Railway west of U.S. 1. A notice to proceed on the 22-month project on July 16, 2018.2

The FEC Railway flyover project dates back to May 2008, when county commissioners signed an agreement with railway officials to construct the bridge. A partnership between Brevard County and the Florida Department of Transportation (FDOT) funded design, engineering and construction costs for the $24 million overpass. The span will be named for retired Major General John Cleland (1925-2017), a Viera resident who served in World War II, Korea and Vietnam.2