Florida State Road 415 and Volusia County Road 415 join Sanford in Seminole County with the east side of Deltona, Osteen and Daytona Beach. The highway provides a popular route to the coast from Sanford and a growing commuter route. The state road totals 18.5 miles north from SR 46 to SR 44 at New Smyrna Speedway. CR 415 extends the route 11.4 miles north along Tomoka Farms Road to U.S. 92 (International Speedway Boulevard). 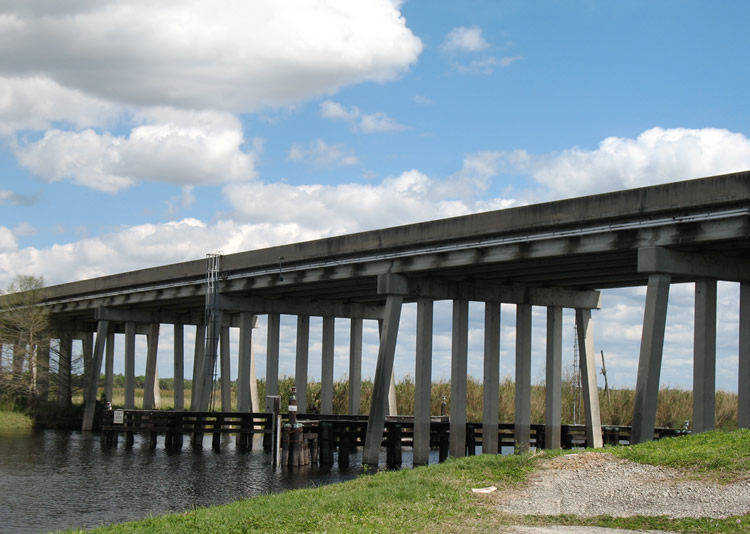 The northbound span across the St. Johns River was dedicated after it opened in 1978 to Douglas Stenstrom (1921-2010). A World War II veteran, Stenstrom served as a Florida State Senator and Chairman of the Seminole County Chamber of Commerce on Roads and Bridges Committee for 20 years. Stenstrom pushed for an interchange along I-4 at Lake Mary Boulevard and worked on other highway improvements throughout the county.1

An eight mile stretch of SR 415 was widened to four lanes from SR 46 and Lake Mary Boulevard north to Deltona. Split between three sections, initial work started in July 2012 on SR 415 between Reed Ellis Road and Acorn Lake Road. Construction on the highway southwest to SR 46 commenced in early October 2012.2 The $81 million project included building a new span for SR 415 south across the St. Johns River, and refurbishing the original northbound bridge.3 The new lanes opened to the south by February 2015, and to the north by Deltona by late 2015. Overall work was complete in spring 2016.4

The new bridge for SR 415 south across the St. Johns River was built in the footprint of the abandoned 1947-span. Construction of the replacement included a realignment of Seminole County 415 (Celery Avenue) south to a new intersection with SR 415.4