Operated by Florida's Turnpike Enterprise and the Central Florida Expressway Authority (CFX), State Road 429 wraps around western reaches of the Orlando metropolitan area between Interstate 4 in northwest Osceola County and SR 46 near Sanford. The toll road partitions into three distinct sections: Daniel Webster Western Beltway from I-4 north to SR 414 at Apopka, John Land Apopka Expressway with SR 414 northwest to U.S. 441 (Orange Blossom Trail), and Wekiva Parkway extending north from U.S. 441 to Mount Plymouth in southeast Lake County and east toward Sanford in Seminole County. Including SR 417 (Central Florida Greeneway / Seminole Expressway), SR 429 will eventually form a complete beltway, with Wekiva Parkway extending the toll road east to I-4 at SR 417 at Sanford.

The 25 mile long Wekiva Parkway currently extends 19 miles north from Orange Blossom Trail in Apopka to SR 46 west of Sanford. Construction on Sections 2B and 2A wrapped up with a ribbon cutting ceremony and 5K run on the morning of March 31, 2018. Completing the Central Florida Expressway Authority (CFX) section of the beltway, the five mile segment links Kelly Park Road with the Mt. Dora Connector (SR 453) and Sections 1A and 1B with Section 4A at County Road 435 (Mt. Plymouth Road). Section 4A, operated by Florida's Turnpike Enterprise (FTE) and opened to traffic on January 20, 2016, provides a 2.8 mile long bypass of Mt. Plymouth between CR 435 and State Road 46.

Succeeding sections of the Wekiva Parkway east are developed by the FTE. Construction for Section 6 of the Wekiva Parkway started on October 18, 2017. Paralleling or replacing SR 46, the six mile segment from near Mt. Plymouth east to Exit 50 near Sanford in Seminole County opened to traffic on May 16, 2022.2 Section 7A, underway from April 1, 2018 to Fall 2022, upgraded 3.53 miles of the State Road 46 corridor into a limited access road, with SR 46 shifting onto the adjacent frontage roads. SR 429 northbound between Exit 50 and 52 opened on August 1, 2022, followed by southbound on August 15, 2022.

The northbound/eastbound lanes of the Wekiva Parkway (S.R. 429) opened this morning from Longwood Markham Road to near Orange Boulevard. Please drive safely and obey the posted speed limit. pic.twitter.com/Oh5ZRMpJBi

Traffic is flowing smoothly as drivers take the new southbound/westbound entrance to the Wekiva Parkway from State Road 46 near Orange Boulevard. pic.twitter.com/fG6z0i4GGG

Drivers are already taking advantage of the new I-4 westbound ramp to the Wekiva Parkway. Motorists can now make their way from I-4 to S.R. 429 southbound/westbound to destinations including the attractions. pic.twitter.com/wU5twy3XuF

The initial stretch of Daniel Webster Western Beltway opened between SR 50 (Colonial Drive) at Ocoee and U.S. 441 at Apopka in July 2000. A 4.5 mile stretch extended the toll road south of Colonial Drive and Winter Garden to County Road 535 in December 2002. The Central Florida Expressway (CFX) portion of SR 429 was completed in December 2005, when SR 429 opened 8.5 miles southward to Seidel Road.1

Florida's Turnpike Enterprise (FTE) constructed the southernmost 11 miles of the Western Beltway between Seidel Road and Interstate 4 in Osceola County. The toll road opened south to U.S. 192 on the Orange County line in December 2005. The Southwest Connector segment of SR 429 in Osceola County opened to traffic on December 8, 2006.

The SR 429 Corridor Capacity Improvements Project expands 13 miles of SR 429 along the Western Beltway and John Land Apopka Expressway from Tilden Road at Winter Garden to Apopka. Estimated to cost $399 million, the CFX construction commenced on Segment 2, from south of Florida's Turnpike to West Road, in January 2022. Work on Segment 3, from West Road north to SR 414 followed in February 2022. Segment 1, from Tilden Road to the Turnpike, got underway in May 2022. Work widening SR 429 along this stretch to six overall lanes is anticipated for completion by late 2024.

Construction began in Winter 2007 on the John Land Apopka Expressway, a toll road extending SR 414 west from U.S. 441 at Lockhart to the Western Beltway at Apopka. This portion opened on March 15, 2009, with a temporary end at SR 429 and County Road 437A (Ocoee Apopka Road). Associated construction through 2012 realigned the Western Beltway west through a new interchange with SR 429 and the remainder of the John Land Apopka Expressway northwest to Orange Blossom Trail (OBT). This included the removing a portion of the Western Beltway mainline, including the diamond interchange with Ocoee Apopka Road.

Construction on the CFX built Sections 1A and 1B, extending SR 429 north along the Wekiva Parkway to Kelly Park Road near the Lake County line, kicked off in 2015. This 4.5 mile long section opened to traffic following a ribbon cutting ceremony held on the morning of July 27, 2017. 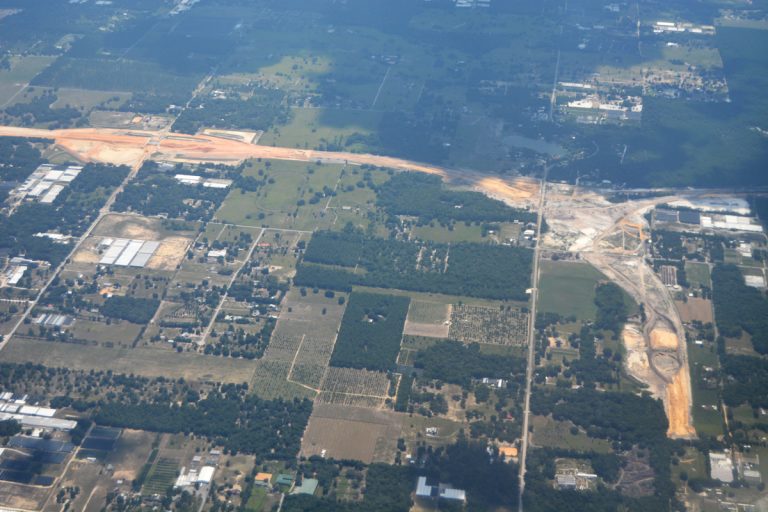 Sections 2B and 2A, the five mile eastern turn of SR 429 to CR 435 (Mt. Plymouth Road), includes a systems interchange with the Mt. Dora connector (Secton 2C). Designated as State Road 453, Section 2C is a new expressway spurring northwest to State Road 46. These CFX projects started in 2016 and were completed on March 31, 2018.