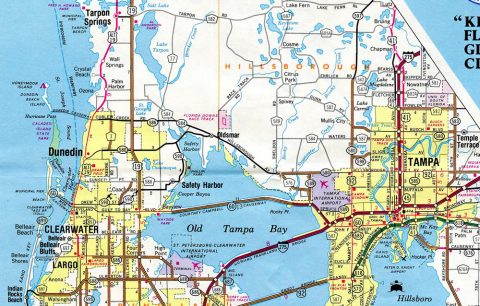 The 1989 Florida Official Highway Map shows the original alignment of SR 580 through both Downtown Dunedin and through Oldsmar. SR 589 ended at SR 580 by Tampa International Airport (TPA).

Survey work for Safety Harbor Bridge taking SR 580 across the Possum Branch of Old Tampa Bay commenced on October 1, 1986. The $13 million curved span replaced a 65 year old, narrow two lane bridge with a safety rating of 6 out of 100, which represented the third lowest rated span in the state at the time. Construction of the 2,102 foot long side by side spans included realigning SR 590 nearly a half mile west from Philippe Parkway to tie into SR 580 west of the replacement crossing.2

The eastbound span for SR 580 across Old Tampa Bay between Safety Harbor and Oldsmar opened with two-way traffic on August 16, 1988.3 Work on the westbound span continued to an opening on January 5, 1989.4

Another realignment involving SR 580 was made at Oldsmar during construction between August 1995 and October 1997. Work shifted the state road away from winding St. Petersburg Drive onto a new four-lane boulevard to the north. The $7.5-million project included the replacement of a 1920s-built two lane bridge. The old alignment remained under state maintenance for a period of time for repairs, drainage and sidewalk work as SR 580A.5

The new State Street alignment through Oldsmar displaced a quarter mile portion of SR 584, which SR 580 overtakes along Tampa Road to the Hillsborough County line. SR 580 then angles southeast along Hillsborough Avenue amid a mixture of wetlands near Double Branch Bay and developed areas of unincorporated Countryway. The arterial becomes increasingly busy with six overall lanes to Town 'n' Country, an older suburban area west of Tampa. This stretch was constructed by the 1950s to replace Memorial Highway as the route of SR 580 between the county line and Sheldon Road.

A diamond interchange joins SR 580 (Hillsborough Avenue) with SR 589 (Veterans Expressway) on the northwest side of Tampa International Airport (TPA). This stretch of SR 580 is regularly congested with commuters during peak hours as it links the Veterans Expressway with Dale Mabry Highway (U.S. 92) at Drew Park. A parclo interchange handles the movements there, where SR 580 turns north onto Dale Mabry Highway.

Dale Mabry Highway represents the main arterial route between Tampa and the northern suburbs. The arterial route originates at MacDill Air Force Base in South Tampa and ends at U.S. 41 in Land O' Lakes, Pasco County. The SR 580 portion totals 2.75 miles between Drew Park and Busch Boulevard in Carrollwood.

Resuming an eastward course, Busch Boulevard takes SR 580 from a folded diamond interchange with Gunn and Dale Mabry Highways into the city of Tampa at Armenia Avenue. The state road parallels a CSX Railroad line to an exchange with I-275 and Hillsborough Heights. The four-lane boulevard proceeds from there to Busch Gardens and the Temple Terrace city line at 52nd Street. One quarter mile further, SR 580 ends at SR 583 (N 56th Street) and Bullard Parkway (CR 580).

Busch Gardens, located on the north side of SR 580 at McKinley Drive (CR 585A), opened to visitors in 1959. SR 580 then was named Temple Terrace Highway. It was renamed by the city of Tampa as Busch Boulevard in 1968, reflecting its status as a gateway to the theme park. Busch Gardens expanded with the Adventure Island water park in 1980.6