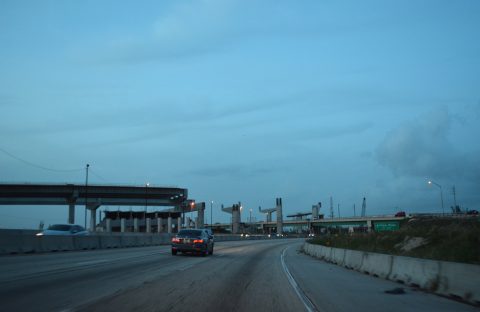 The Don Shula Expressway was expanded with an addition lane in each direction between 88th Street / Kendall Drive and SR 826 (Palmetto Expressway). The Mainline Improvements project ran from Fall 2011 to 2014. It included the addition of sound walls and landscaping work. Prior construction upgraded SR 874 southwest from Kendall Drive to SW 117th Avenue. Underway from Fall 2008 to 2011, the work also reconstructed the Killian Parkway interchange.1

Widening of the Homestead Extension from Eureka Drive / SW 184th Street north to Killian Parkway / SW 104th Street included the redesign of the exchange between the HEFT and SR 874 (Don Shula Expressway). The $145.3 million project started in March 2014 realigned the ramps for SR 874 from the left side to the right side and added Express Lane ramps. Work extended to Spring 2019.2

Planned as the South Dade Expressway, the toll road was renamed in 1982 in honor of the National Football League's Miami Dolphins coach Don Shula. Like many other freeways in the Miami-Dade region, The Don Shula Expressway was first proposed in the 1969 Miami Transportation Study. The route was outlined as splitting northeast from the West Dade Expressway, which was later renamed as the Homestead Extension to Florida's Turnpike (HEFT), to the Palmetto Expressway. The 1969 plan initially referenced the HEFT south from SR 874 to U.S. 1 as part of an extended South Dade Expressway, but plans subsequently changed to incorporate the southern portion of the route into the Florida's Turnpike system.

Previously proposals called for extending SR 874 southwest from the Homestead Extension further along the South Florida Rail Corridor (SFRC) all the way to SR 997 (Krome Avenue). However, each time those plans arose, they were promptly rejected by the regional planning agency.