This suite of photos provides views looking from Soledad Mountain down to Interstate 5 as it passes through Rose Canyon en route toward the University of California at San Diego, Downtown San Diego and the Pacific Ocean. Palms line the coastline at La Jolla Shores, which is also visible from Soledad Mountain. Photos taken 02/27/11.

Interstate 5 begins at the San Ysidro Port of Entry at the International Border with Mexico and extends north through or near several cities, including San Diego, Santa Ana, Los Angeles, Coalinga, Tracy, Stockton, Sacramento, Redding, and Yreka. It continues into Oregon and Washington en route to Portland and Seattle before ending at the International Border with Canada near Blaine, Washington. Interstate 5 is arguably one of the most important highways in California, connecting the state from the rural extremes of the north to the farm land of the Central Valley to the vastly populated urbanscape of the Southland. The freeway is the lifeline of the state, connecting to most of the major population centers, including Southern California, the Central Valley, and Northern California.

This freeway was built in stages between the 1950s and the 1980s, with the last segment opening along a rural stretch north of Redding. Interstate 5 replaced U.S. 99 for much of its journey in the state, from downtown Los Angeles north to the Oregon State Line. Even though California 99, the successor to U.S. 99 in the Central Valley, is still an extant freeway of its own, most through traffic opts for Interstate 5, including the Los Angeles to San Francisco traffic. 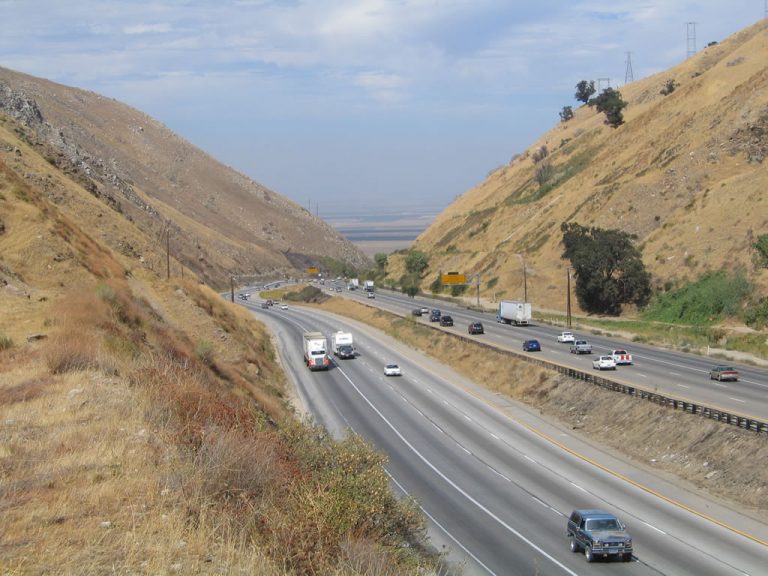 The Central Valley looms on the horizon along Interstate 5 (Golden State Freeway) on the Grapevine grade. The eight-lane freeway is one of the busiest rural freeways in the state, as it serves part of the main route from Northern California to Los Angeles. Photo taken 09/25/05.

The following provides a brief overview of the history of Interstate 5 in San Diego, as well as some projects that improved the freeway:

Many thanks to Merle F. McClelland for his assistance in creating this historical chronology.

Many thanks to C.J. Moon for his assistance in providing this historical chronology.