Business Loop I-15 at the city of Norco constitutes a 2.3 mile route west from Interstate 15 between Exits 98 and 100. Nearly unmarked due to the removal of signage, the loop follows Second Street west to Hamner Avenue north and Sixth Street east.

California 31 (Hamner Avenue) was the original designation for Interstate 15 between California 91 at Corona and I-10 at Ontario. It was also once known as Temporary I-15 before the freeway opened to traffic. The state route designation was decommissioned when I-15 was completed as a freeway along this stretch in 1989. Hamner Avenue was subsequently returned to local maintenance and the Business Loop I-15 designated. 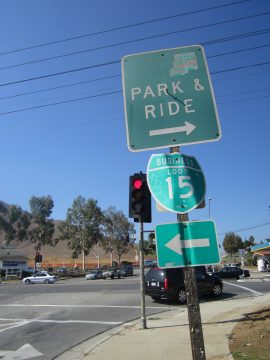 A lone trailblazer remains along the Norco business loop for I-15 as of 2017. The assembly stands at Sixth Street and Hamner Avenue. Photo taken 10/13/12.