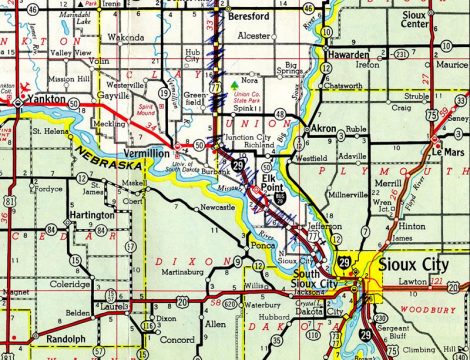 The Elk Point Business Loop for Interstate 29 appears on this 1965 Gousha map of South Dakota. U.S. 77 was already replaced by I-29 northward to U.S. 18 east in Lincoln County. The route however remained through North Sioux City and Lincoln, which later became a part of SD 105.

Elk Point is a small city with over 1,800 residents in Union County. The community lies 16 miles north of Sioux City, Iowa and is the main population and service center along I-29 between North Sioux City and Beresford. Business Loop I-29 travels along 477th Avenue and Main Street along a 2.679 mile route between Exits 15 and 18.