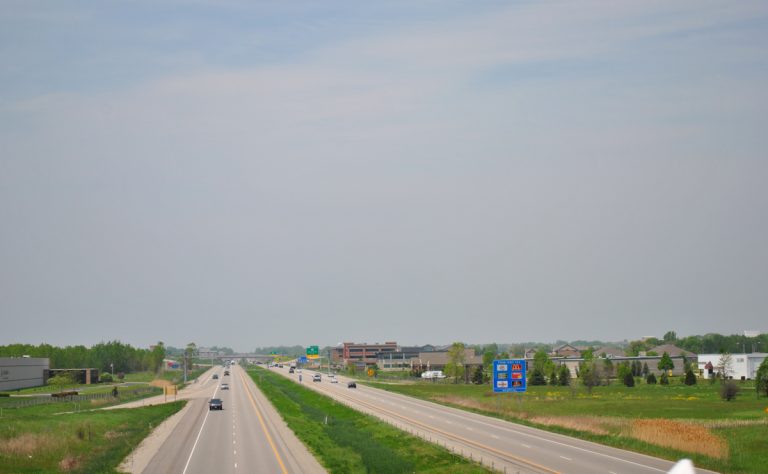 Interstate 41 travels 172.5 miles north from the Illinois state line at Pleasant Prairie to Howard near Green Bay. The designation was one of four considered for the U.S. 41 and U.S. 45 corridor between Milwaukee and Green Bay including I-47, I-594 and I-643. The American Association of State Highway Officials (AASHTO) ultimately chose I-41, approving it on November 15, 2012. Concurrence from the Federal Highway Administration (FHWA) followed and signs started to appear along U.S. 41 in May 2015.

Shields and guide signs for U.S. 41 were vastly changed over to reflect Interstate 41 by November 2015. U.S. 41 only appears now on reassurance and confirming markers alongside I-41 on the freeway mainline and on supplemental signs at major crossroads.

Interstate 41 combines with I-94 in southern Kenosha County. The two overlap northward to Kenosha, Racine and the south Milwaukee suburbs. Once in Milwaukee, I-41 turns west alongside I-43 south and I-894 through Greenfield as I-94 continues to Downtown with I-43 north.

I-41/894 turn north from the west split with I-43 (Hale Interchange) to West Allis and Interstate 94 at the Zoo Interchange. Multi-year construction through 2018 modernized that exchange, which was designed with left exit ramps in all directions. I-894 ends there as I-41/U.S. 45 continue north through Wauwatosa and north Milwaukee to leave Milwaukee County via Menomonee Falls and Germantown.

U.S. 45 branches onto a separate freeway north from Germantown to West Bend as Interstate 41 advances northwest along a more rural route to Dodge and Fond du Lac Counties. The city of Fond du Lac, located at the south end of Lake Winnebago, is next. U.S. 151 ties into I-41 there as the freeway bypasses the west side of the city.

Northward, I-41 and U.S. 45 reconvene at the city of Oshkosh on the west side of Lake Winnebago. U.S. 45 leaves the freeway corridor toward New London as Interstate 41 approaches the city of Appleton and U.S. 10. Circling along the west and north sides of the Fox Cities, an urban loop, Wis 441, serves Menasha, south Appleton and Kimberly.

Beyond Appleton, Interstate 41 travels east to Little Chute and Kaukauna before turning northeast to De Pere, Ashwaubenon and Green Bay. I-41 forms the western quadrant of a freeway belt line encircling the city of Green Bay to the northern terminus of Interstate 43. I-41 ends a short distance north of I-43 at Lineville Road within the village of Howard. U.S. 41 emerges there and overlaps with U.S. 141 along a freeway to Sumamico and Abrams. Most of the remainder of U.S. 41 in Wisconsin travels an expressway northeast to Oconto, Peshtigo and Marinette. U.S. 41 exits the state via a system of boulevards to the Marinette city center and across the Menominee River into Michigan.