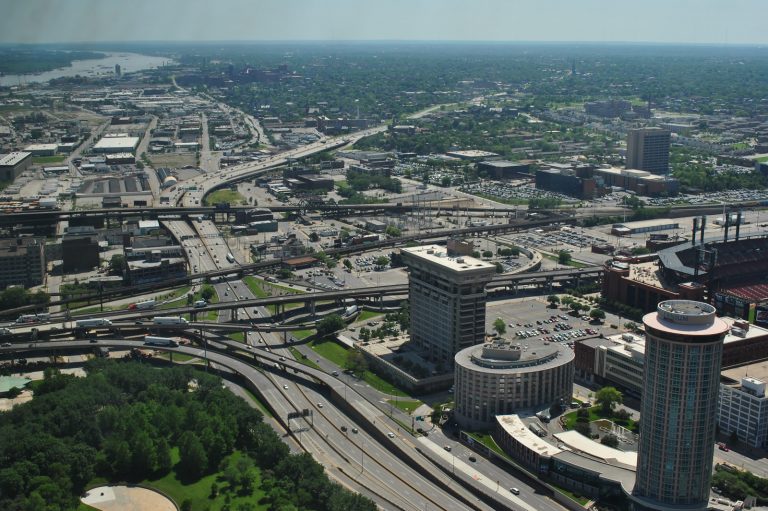 Interstate 64 extends 40.5 miles west into the Show Me State. Overlapping with U.S. 40, the freeway crosses the Mississippi River alongside I-55 on the Poplar Street Bridge. Passing just south of Downtown St. Louis, I-64/U.S. 40 navigate along an urban corridor, with a portion comprising two decks. West from St. Louis and the I-270 beltway, I-64 becomes more suburban, serving an array of suburbs through west St. Louis County and St. Charles County. U.S. 61 accompanies the route west from Lindbergh Boulevard to the west end at I-70 in Wentzville.

The origins of Interstate 64, and the Highway 40 freeway before that, go back to two roadways, the Red Feather Highway, named in 1948 after a charity and running within the city of St. Louis, and the Daniel Boone Expressway between Wentzville and Brentwood. The two roadways were connected in the late 1950s and designated as part of U.S. 40 freeway. The Red Feather Highway, previously called the Oakland Express Highway, was constructed from downtown to Forest Park between 1935 and 1938. The U.S. 40 portion along the Daniel Boone Expressway was built in the 1930s and 1940s.2

A five year $55.5 million construction project upgraded the full cloverleaf interchange between Interstate 270 and U.S. 40 between 1988 and December 7, 1993. This work involved over 50 different ramp configurations over the course of work to maintain traffic flow. I-270 was expanded to eight overall lanes through the new directional interchange while U.S. 40 was widened to six.3

Major reconstruction of I-64/U.S. 40 was undertaken during a two-year period between Ballas Road, just east of I-270, to Kingshighway Boulevard in St. Louis. Work shut down a five mile stretch of I-64/U.S. 40 between Ballas Road (Exit 26) and I-170 (Exit 32A/B) on January 2, 2008 so that crews could completely rebuild the freeway. A second closure followed from I-170 east to Kingshighway Boulevard (Exit 36A) on December 15, 2008, as the western five miles reopened to traffic. The $535 million upgrade redesigned 10.5 miles of freeway to modern standards. Facets of the work included new overpasses, improved interchanges and a major upgrade to the junction with Interstate 170. Work also added a lane in each direction of I-64/U.S. 40 between Spoede Road (Exit 27) and Interstate 170. Dubbed "The New I-64", the project started in 2000 was completed on December 7, 2009.5

Interstate 64 and U.S. 40-61 span the Missouri River across a pair of steel truss bridges named the Daniel Boone Bridge. The westbound span was built in the 1930s as part of the routing of U.S. 40. It was converted into a westbound only bridge with three overall lanes and no shoulder on September 20, 1991 as part of a $33 million project started in 1983. Construction included $26 million for the new eastbound span, which opened on August 10, 1989 carrying two-way traffic with four overall lanes. The 1935 bridge closed on September 28, 1989 for $7 million in renovations before reopening as a westbound only span.4,8,9 Once at the end of its service life, the westbound Daniel Boone was replaced as part of a $110.9 million replacement project that commenced symbolically on January 3, 2013. The new eastbound bridge was expected to open by late 2014,4 but was delayed until June 26, 2015 when a ribbon cutting ceremony was held.10 Eastbound traffic shifted to the new bridge, leaving westbound to use the 1989 bridge. Demolition of the 1937 bridge was expected by late 2015.11

Work to upgrade U.S. 40 west of Interstate 270 to Interstate standards commenced in 1997 to remove at-grade intersections along the route through St. Charles County. The final traffic light, at Callahan Road, was removed as part of a ceremony held to open a new interchange with Prospect Road on October 14, 2009. This was the last of a series of signals including others at Prospect Road, Highway K and Highway N removed in a $170 million upgrade. The Prospect Road exit was included in $23 million in work started in 2007 to upgrade U.S. 40/61 between I-70 and Lake St. Louis Boulevard.7