Built as part of the Ohio River Bridges project, construction involving the Downtown Crossing added a second span for Interstate 65 across the Ohio River. The new cable-stayed bridge, named the Abraham Lincoln Bridge in honor of the 16th President of the United States, opened to traffic on December 6, 2015. The span initially opened to northbound traffic, with southbound traffic shifted to the bridge on December 16, 2015. The shift allows crews to reconstruct the 1963-opened John F. Kennedy Memorial Bridge for an eventual southbound only operation. The $22 million project will also add a new floor system to the cantilever bridge and add decades to the life expectancy of the crossing. This work runs through late summer 2016 and on the overall Downtown Crossing project to December 2016.1 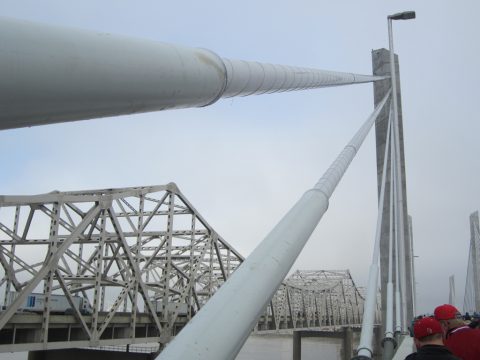 A public bridge walk was held on the Abraham Lincoln Bridge on December 5, 2015. An estimated 50,000 attended the event during a cold Saturday morning. This view shows the north tower of the cable stayed bridge and the adjacent Kennedy Bridge. Photo taken by Tom Reaugh. 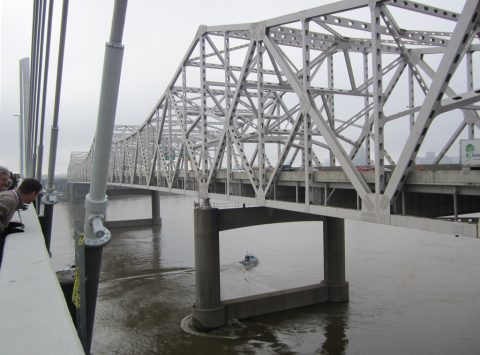 The John F. Kennedy Memorial Bridge parallels the Abraham Lincoln Bridge to the west. Construction on the cantilever span started in April 1961 and the bridge was dedicated on December 6, 1963, when it opened for northbound traffic. Southbound traffic began flowing on the span a few weeks later.2 Photo taken during the Abraham Lincoln Bridge walk by Tom Reaugh on December 5, 2015.