Interstate 65 travels through the Volunteer State from Elkton north to Mitchellville. The 121.71-mile joins Nashville with Birmingham, Alabama to the south and Louisville, Kentucky to the north. Suburban expansion of the capital city stretches south along I-65 to Franklin and Spring Hill and north to Hendersonville and Millersville. Growing traffic demands result in expansion and redesign of the commuter freeway both south and north from Nashville.

Until April 7, 2000, Interstate 65 followed I-40 and I-24 around the east side of Downtown Nashville. The shift to the west along I-40 and the former Interstate 265 was made to better disperse traffic through the center city.

Expansion of I-65 between Interstate 840 and a point north of SR 2482 at Franklin added four overall lanes for a 4.096-mile stretch. Work included redesign of Exit 61 to a Tight Urban Diamond Interchange (TUDI) with SR 248 (Peytonsville Road east / Goose Creek Bypass west) and expansion of the state route. Work there ran from August 30, 2013 to June 2016. 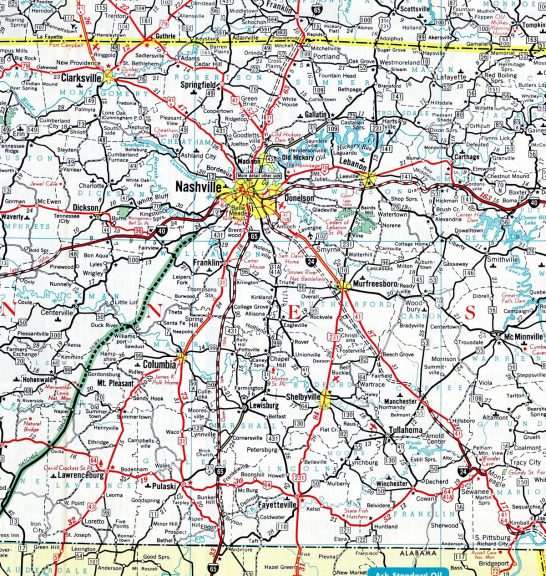 The short stretch of I-65 completed in 1958 tied into U.S. 31 leading north to Pulaski from Athens, Alabama. The remainder of the route north to Davidson County was under construction by 1964.

North from central Nashville, Interstate 65 was expanded partially from U.S. 431 (Trinity Lane) to SR 386 (Tennessee Veterans Boulevard) in the late 1990s. A $50-million project completes the freeway widening between Trinity Lane (Exit 87) and U.S. 41 (Dickerson Pike).3 The ten-lane expansion commenced in October 2012. Work included adding lanes to the ramps with I-24 and the installation of 14 noise walls. Construction wrapped up in May 2016.

Another expansion project widened I-65 up to six lanes at the Kentucky state line. This work coincided with the construction of a new parclo cloverleaf interchange with an extension of SR 109 from U.S. 31W to the freeway. Initial construction was underway in October 2015 at the new SR 109 overpass above I-65. Ramp construction continued through September 2016, with follow up work continuing through May 2018.3