Interstate 70 stretches from Hancock and the Pennsylvania state line to I-695 and the city of Baltimore. Originally I-70 partitioned into separate branches at Frederick. Interstate 70S followed today':s I-270 while Interstate 70N followed the present day I-70 mainline.

Within Maryland, Interstate 70 supplemented or directly overlaid the U.S. 40 corridor from Baltimore west to Hancock. This includes the stretch from Exit 82 west to Exit 59, which opened in 1970 as I-70N.

The 1.95-mile long spur of I-70 within the Baltimore Beltway (Interstate 695) ends at a park and ride lot above MD 122 (Security Boulevard). This lightly traveled stretch of freeway was slated for demolition as part of a Maryland Transit Administration (MTA) project to construct the Red Line subway into Baltimore. Proposed work outlined the removal of the MD 122 and I-70 interchange and conversion of the six-lane freeway into a two-lane parkway. It was to be renamed Cooks Boulevard and maintained by the Maryland State Highway Administration.1 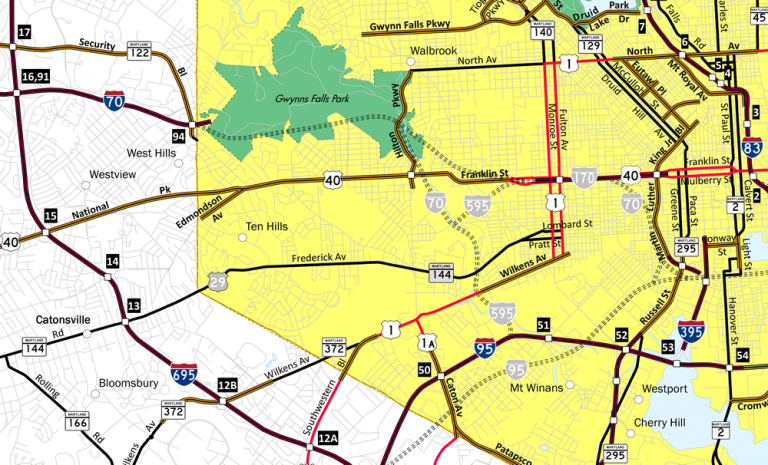 Two alignments were planned for Interstate 70 through the city of Baltimore. Traveling east through Gwynns Falls Park, the first proposed alignment of I-70N merged with the U.S. 40 corridor before turning south to end at the eventual alignment of I-95 near the Baltimore Ravens stadium. Subsequent changes shifted Interstate 70N more southeasterly to connect with I-95 east of Caton Avenue while establishing a freeway spur (Interstate 170) eastward along U.S. 40.

Community opposition stopped construction east into Gwynns Falls and Leakin Parks. A section of freeway opened as Interstate 170 between the one-way couplet along U.S. 40 and ramp stubs were built for the planned east end of I-70 along Interstate 95 at Exit 51. A final proposal outlined a spur (Interstate 595) utilizing a portion of the planned I-70 corridor northwest from I-95 to the section of Interstate 170.