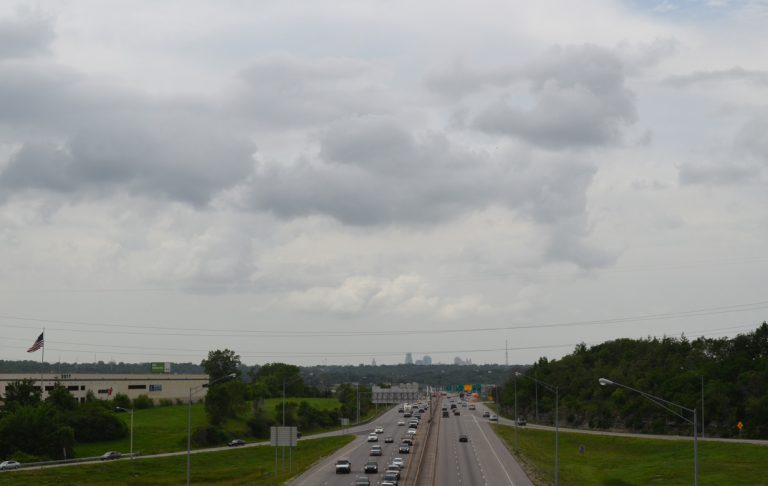 Westward view of Interstate 70 from the Interstate 435 overpass by Cunningham Ridge in Kansas City. 06/18/15.

Interstate 70 stretches across the width of Missouri, joining the metropolitan areas of Kansas City with St. Louis. The freeway replaced U.S. 40 throughout much of the 250 mile route across the Show Me State. Despite long rural stretches, traffic is heavy on the freeway with I-70 representing a major trucking corridor for the Midwestern states. The east end was relocated in 2014, shortening the route by 1.50 miles as it bypasses the Mississippi Riverfront in St. Louis.

The interchange between Interstates 70 and 270 was upgraded in the early 1980s. Rest areas near Mineola were closed May 31, 2011 as the well that supplied the facility with water was capped. The areas remain available for truckers and overnight parking.4

Exit 228 with Missouri 94 (1st Capitol Drive) at St. Charles was upgraded from a diamond interchange into a single point urban interchange (SPUI) over the course of seven years. The $27-million project was vastly completed by late April 2008 and included the replacing of two two-lane overpasses of MO 94 with a ten-lane overpass.2

Following Mark McGwire's 70-home run season for the St. Louis Cardinals, the six-mile section of Interstate 70 within the city of St. Louis was named the Mark Mc Gwire Highway. Established on June 10, 1999, Mark Mc Gwire Highway was eventually dropped from I-70, following the steroid scandal in which he admitted to using performance enhancing drugs during his playing career.10 The Missouri Legislature restored the name Mark Twain Highway, after the famed author, in May 2010.11

The reversible lanes, now known as the Express Lanes, comprise a two-lane roadway between the general travel lanes along Interstate 70 between Broadway and Union Boulevard in the city of St. Louis. Constructed in the early 1960s, the lanes were designed to carry inbound traffic during the morning peak hours and outbound traffic during the evening peak hours.5 They provide no outlet for local traffic, bypassing all mainline exits between their ends.

A concept to remove the reversible lanes was studied by the state in the mid-1990s. However it was determined unless the freeway could be expanded to five lanes per direction (deemed cost prohibitive due to right of way needed), that retaining the reversible lanes was a better alternative. This preceded the $150-million reconstruction of Interstate 70 through St. Louis.7 The reversible lanes were closed on August 3, 1998 in a project expected to run through 2000 (but was delayed to 20037). This work involved the replacement of six bridges carrying I-70 traffic: Branch and Angelica streets, East Grand Avenue, Prairie Avenue, Riverview Drive and over a railroad line. Additionally the Buchanan Street underpass was eliminated (by spring 1999) and I-70 elevated on fill. Following the completion of the bridge project, the reversible lanes were restriped to three lanes so crews could work on the bridge sections between the main roadways.6

A second closure effected the reversible lanes from September 13, 2005 to the end of that month so that MoDOT could repair pavement and conduct resurfacing.8 Closure again in December 2011 led to a reopening of the now-Express Lanes with eastbound (inbound) traffic only. This pattern remained in effect to the new Mississippi River Bridge opening, when MoDOT was to reconsider using the lanes again for outbound traffic.5

With origins in 2001, a new 1,500-foot long cable-stayed bridge spans the Mississippi River one mile north of the Martin Luther King Bridge between St. Louis and Brooklyn, Illinois. The bridge carries a realignment of Interstate 70 northwest from the interchange where I-64 combines with I-55 (Tri-Level Interchange) at East St. Louis to the freeway (old I-70 / new I-44) leading north from Downtown St. Louis and south of Tyler Street.

I-70 vacated its alignment across the Poplar Street Bridge (PSB) and the below-grade freeway along side Memorial Drive, North 3rd Street and Broadway through Downtown St. Louis. Interstate 44 was extended northward from the PSB in place of I-70. 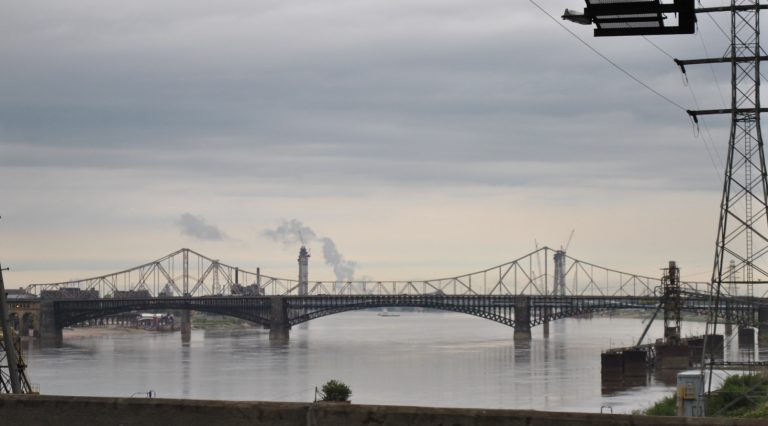 Towers for the eventual Interstate 70 Mississippi River bridge rose beyond the adjacent Eads and Martin Luther King, Jr. Memorial Bridges in this view looking north from the Poplar Street Bridge. 05/04/12.

The Stan Musial Veterans Memorial Bridge ties into the original I-70 freeway opposite an extension of Tucker Boulevard. Tucker Boulevard was realigned to meet the bridge end as a gateway into Downtown from the north, with a new eastbound ramp from Interstate 70 to the boulevard opened on September 26, 2013. East of the Mississippi River at Fairmont City, a new interchange connects I-70 with Illinois 3 (St. Clair Avenue) via 1st Street.

Construction on the Stan Musial Veterans Memorial Bridge commenced in late 2009 with a formal ground breaking taking place on April 19, 2010. Costing $667-million, the project was completed with the opening of the bridge on February 9, 2014. The span carries four overall lanes and includes the capacity to be restriped for six lanes.

Another major bridge project completed along Interstate 70 involved the Blanchette Bridge across the Missouri River. Started in November 4, 2012 at a cost of $64-million, the rehabilitation project closed the westbound span and shifted all traffic onto the eastbound bridge with a reduction to six overall lanes. This allowed crews to demolish a portion of the 1958-built bridge so it could be rebuilt. Included in the work was the replacement of the truss superstructure, redecking of the span, and the elevating of the easternmost portion of the bridge on embankment.3 The westbound bridge reopened to traffic on August 24, 2013, over two months ahead of schedule. Crews continued with final work under the bridge to the end of 2013.