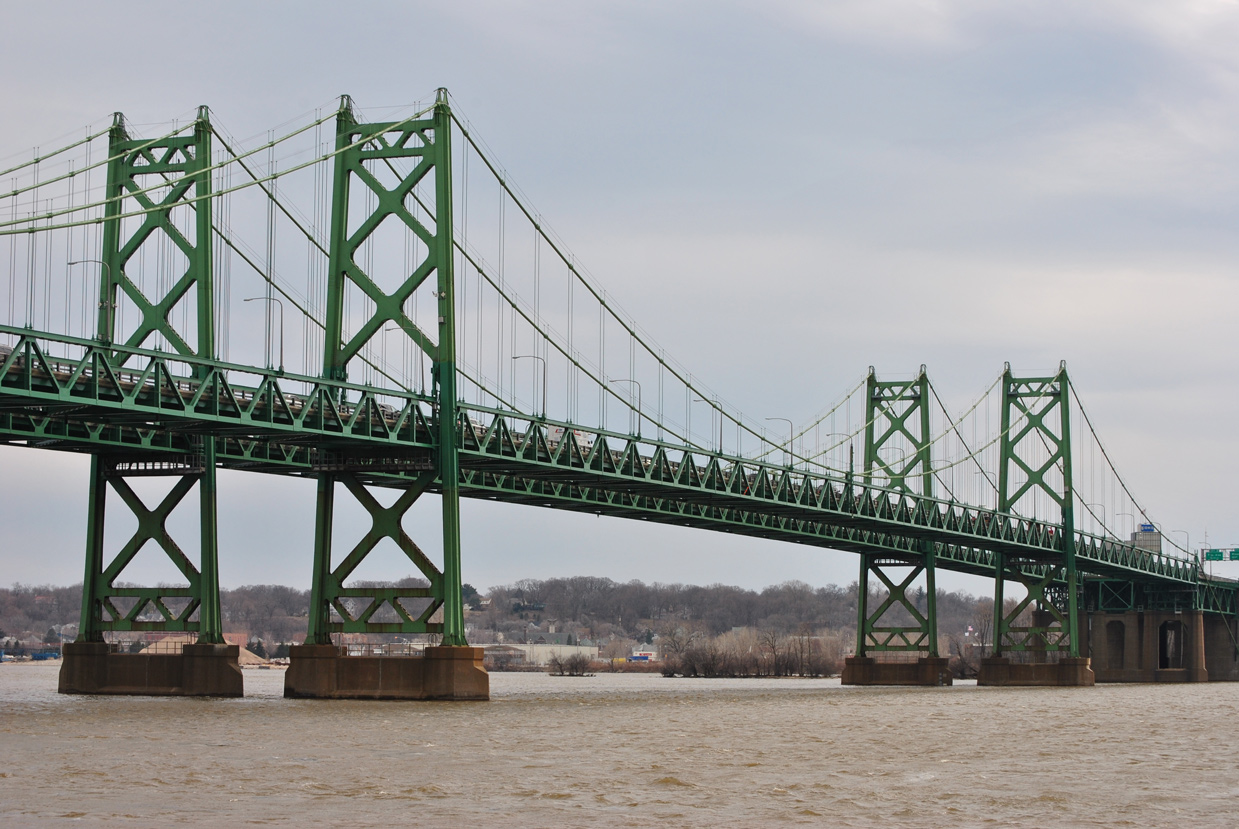 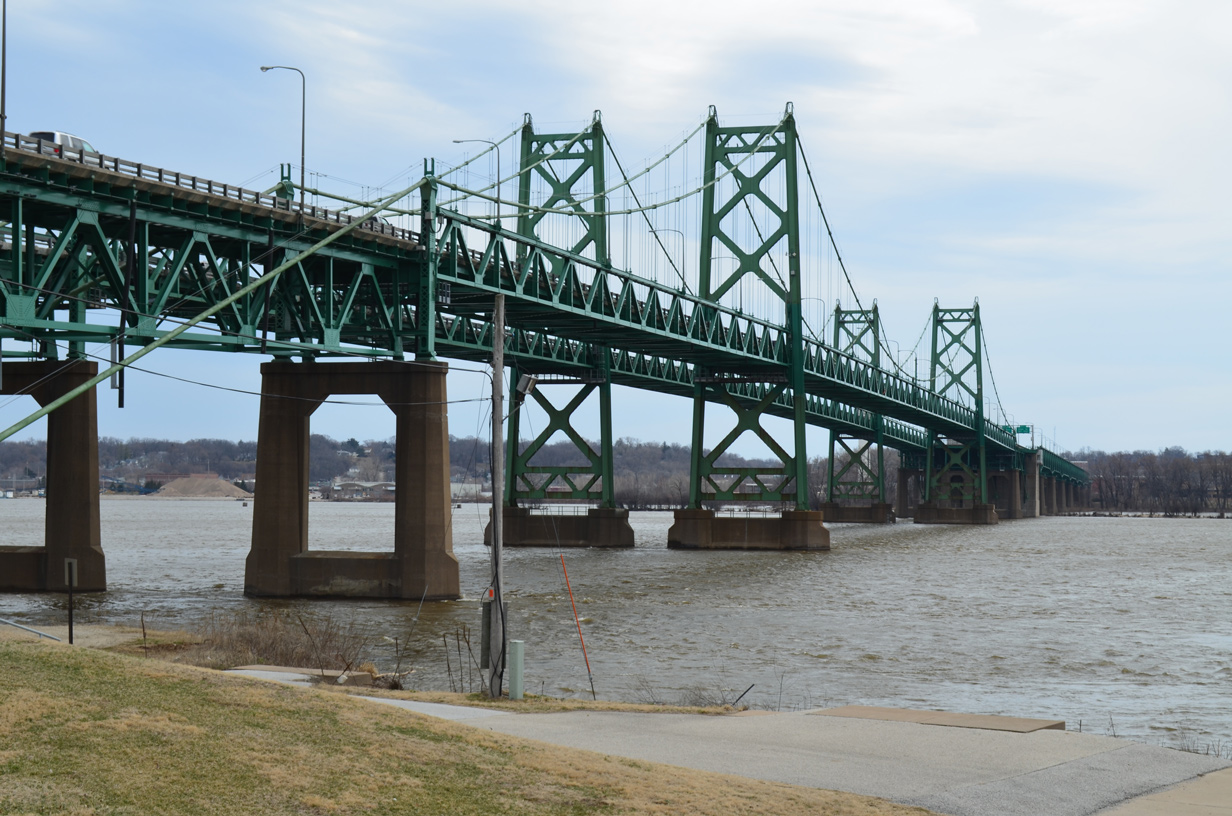 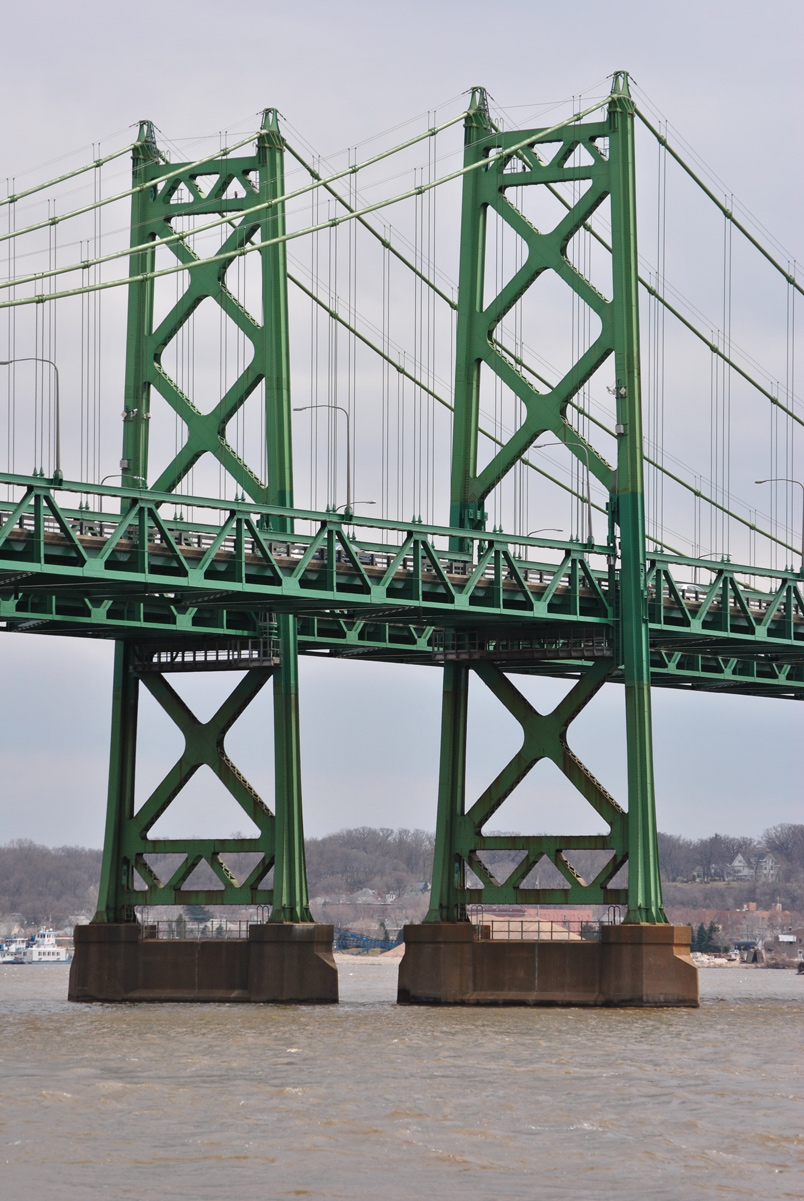 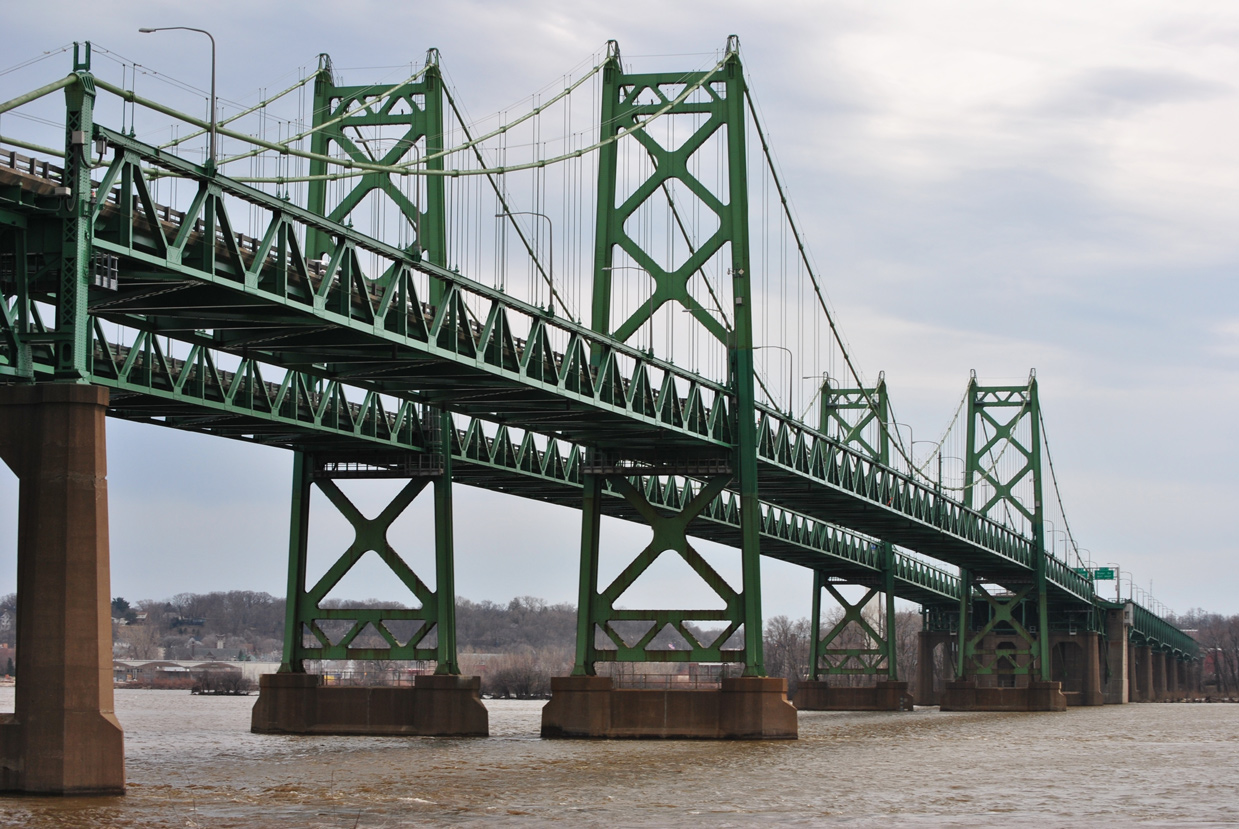 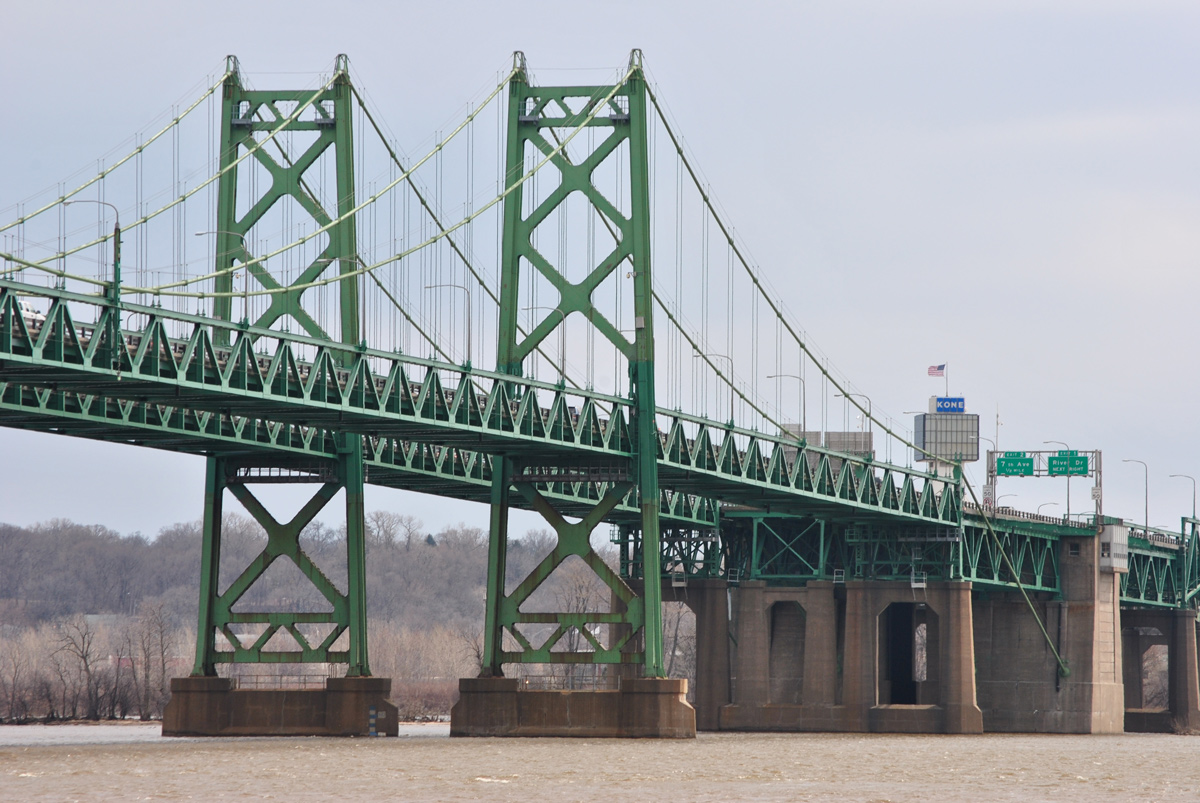 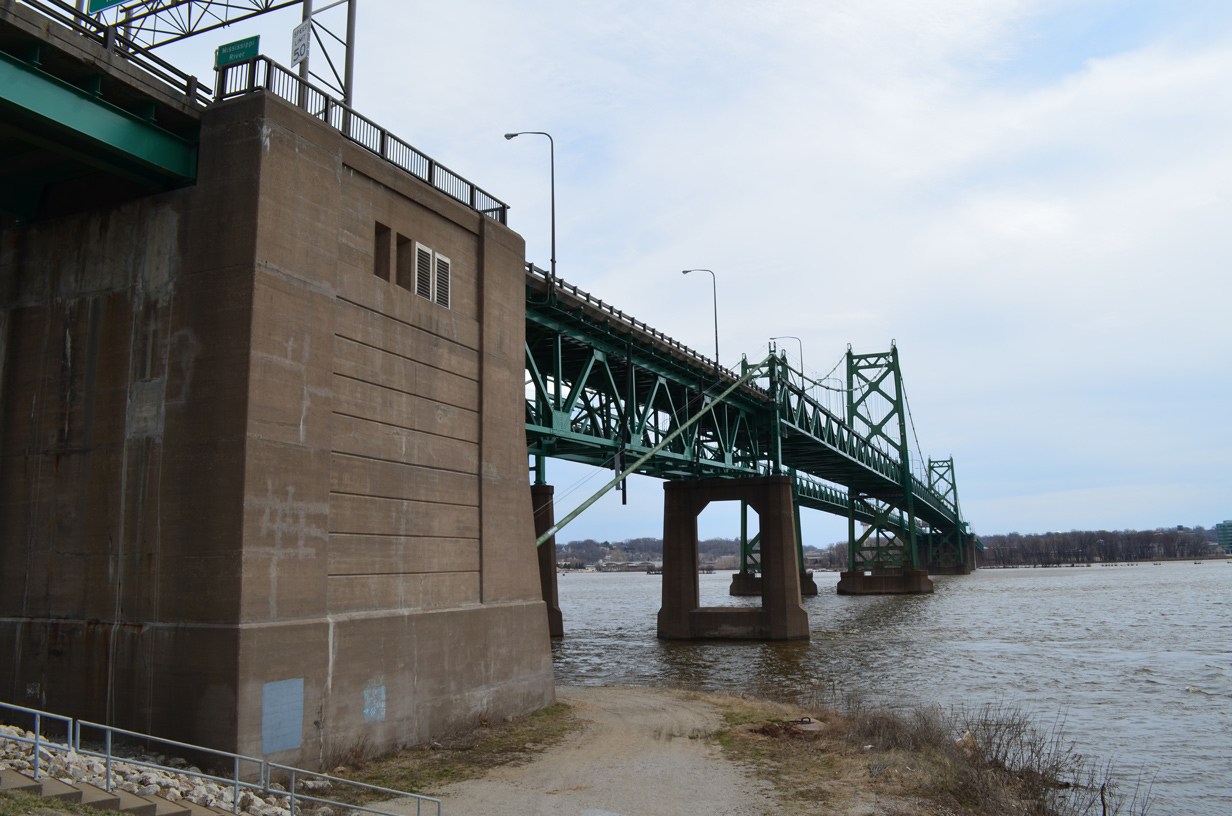 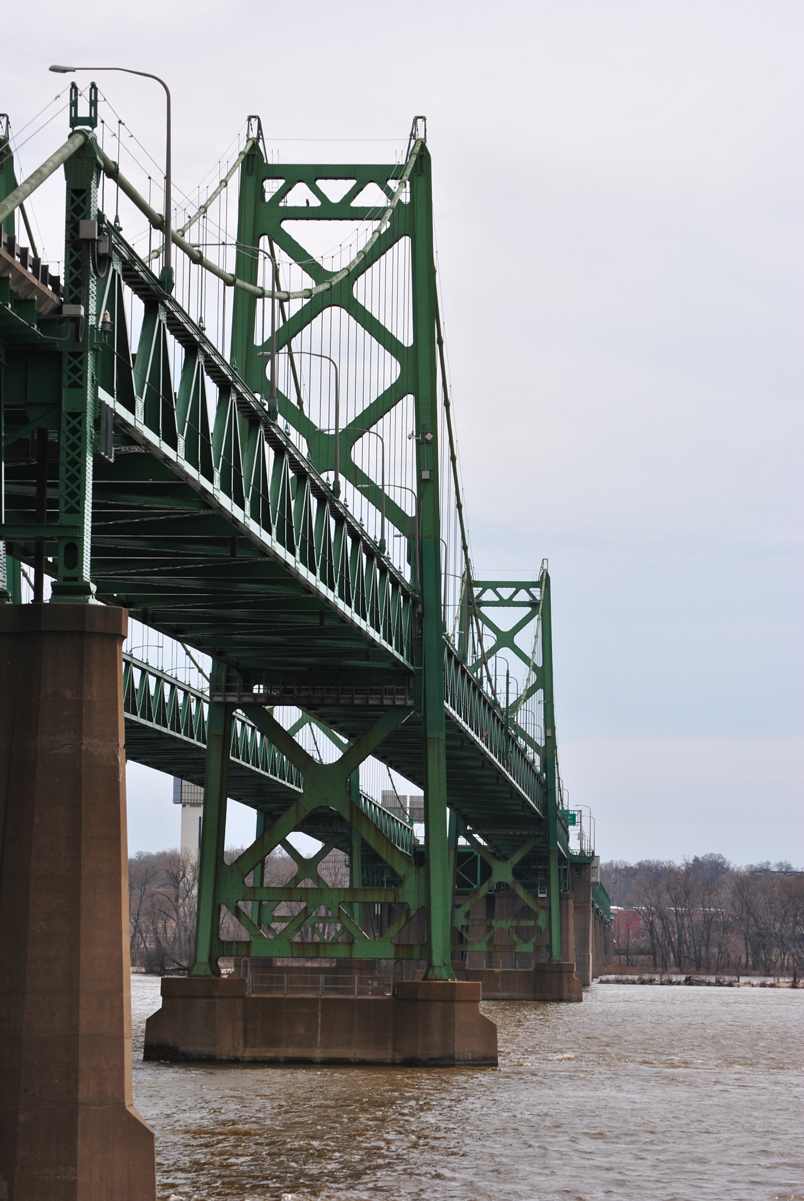 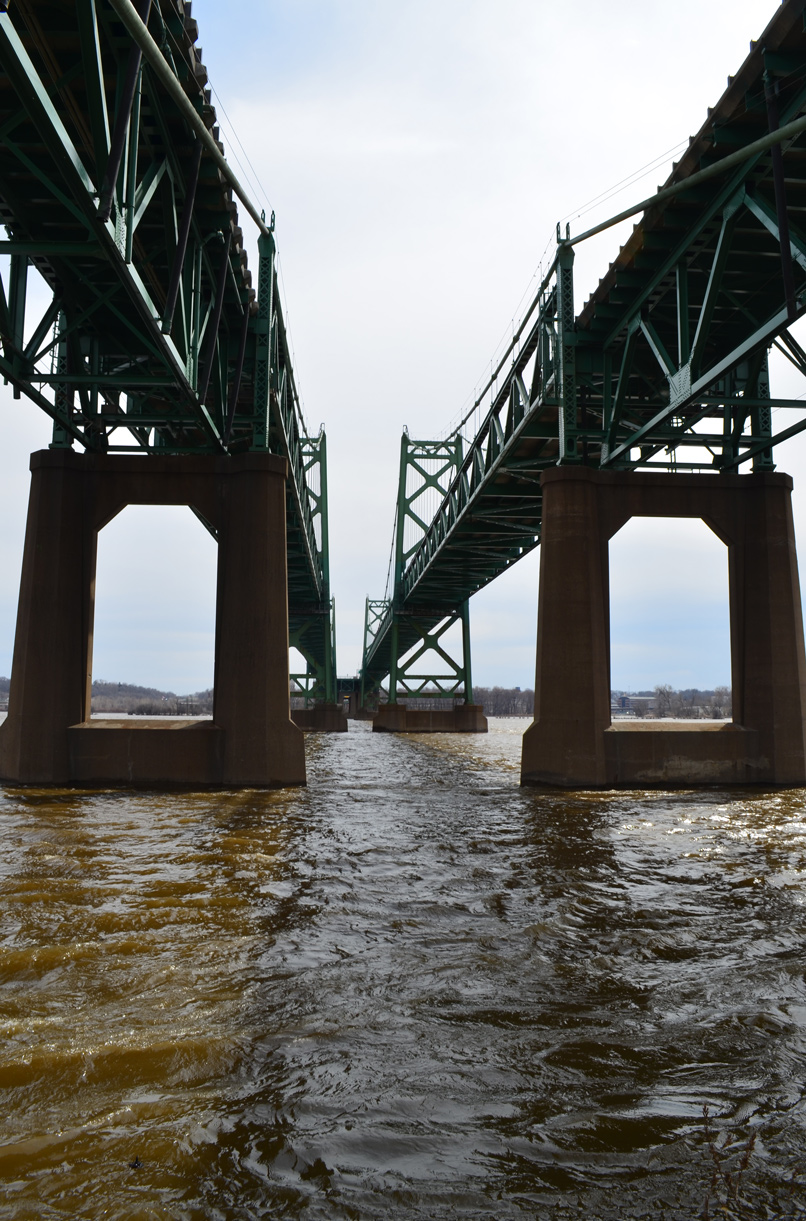 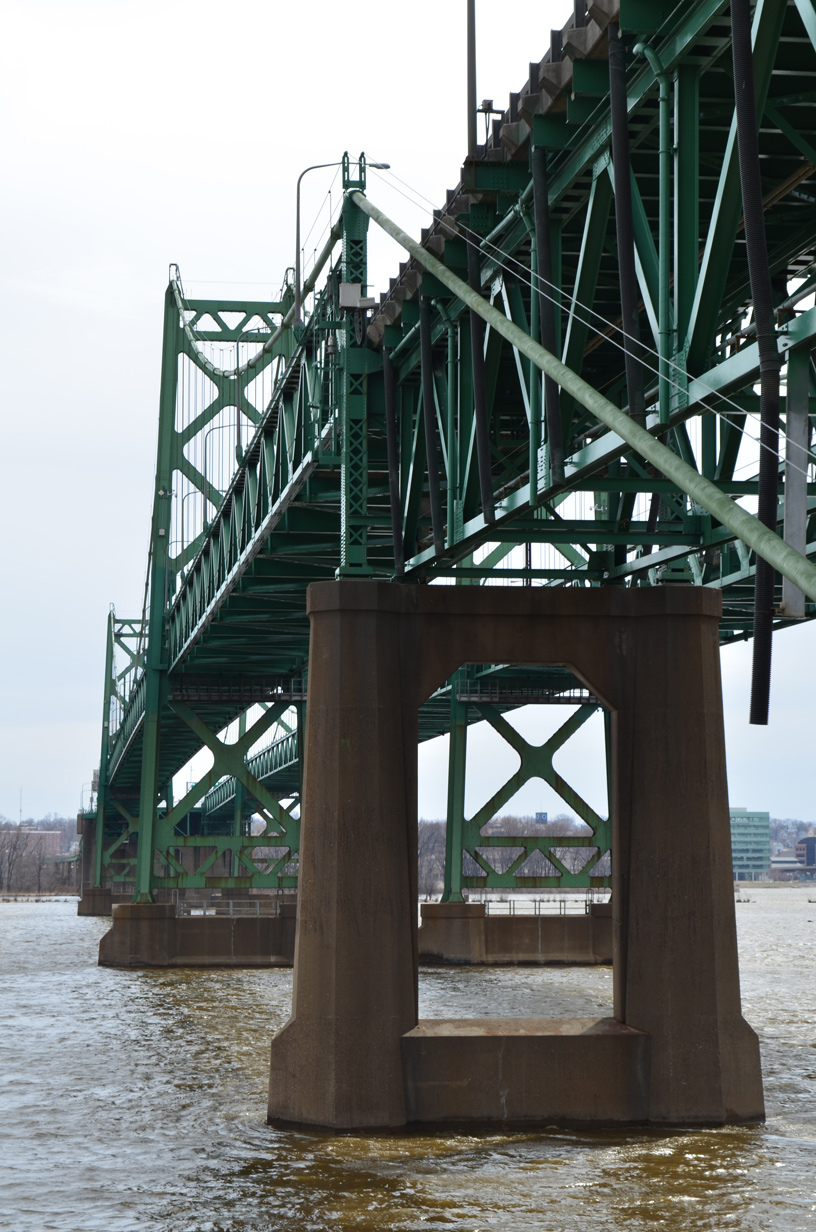 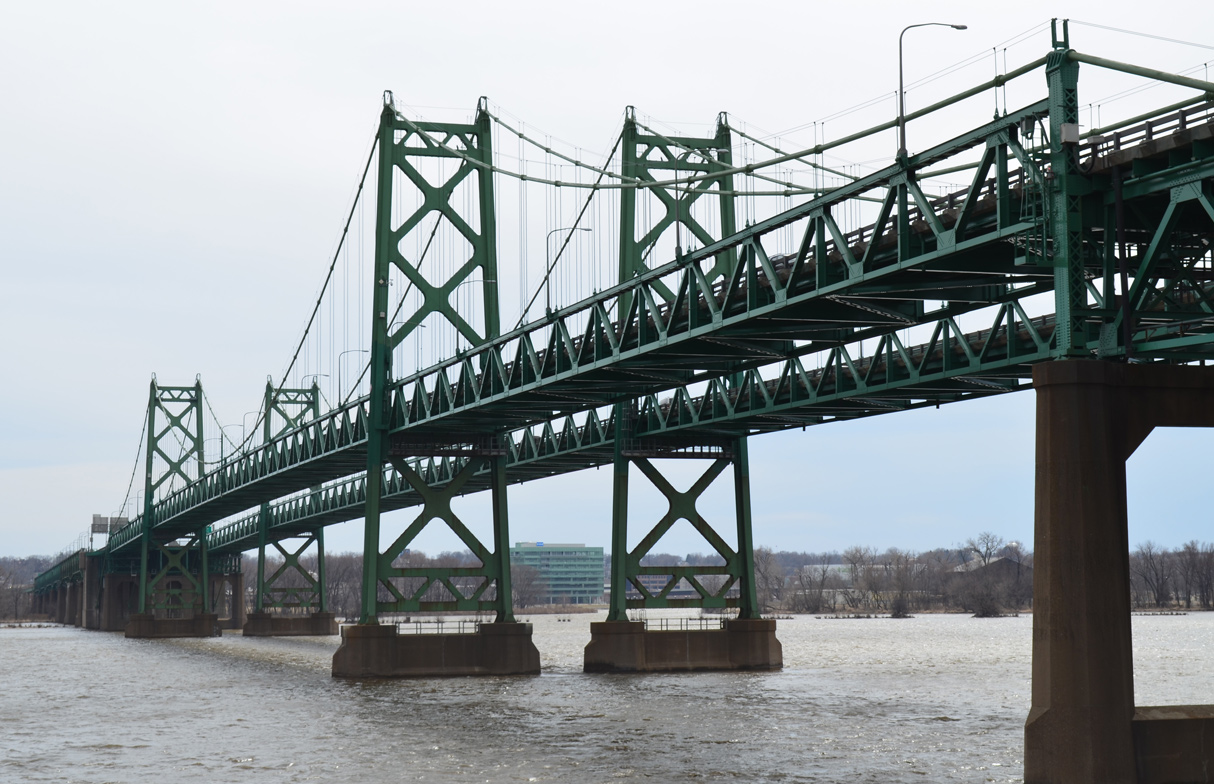 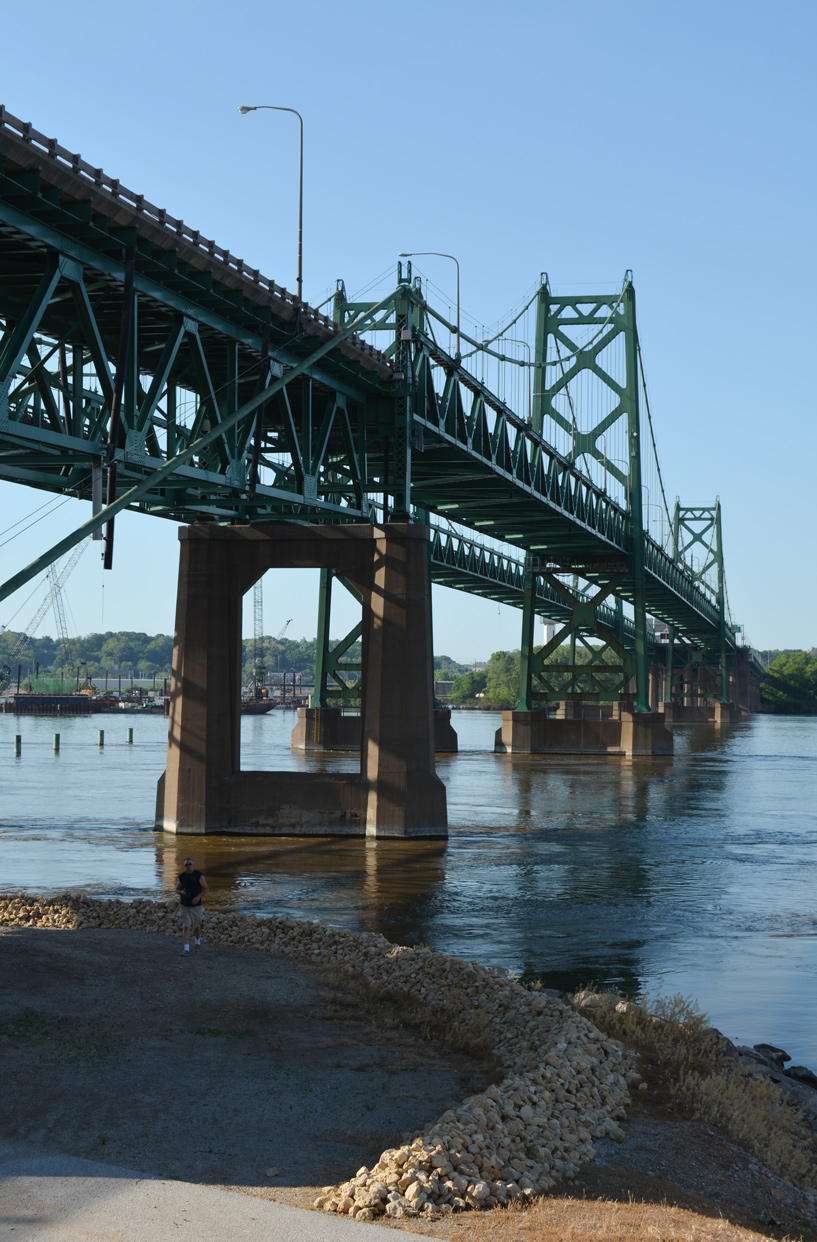 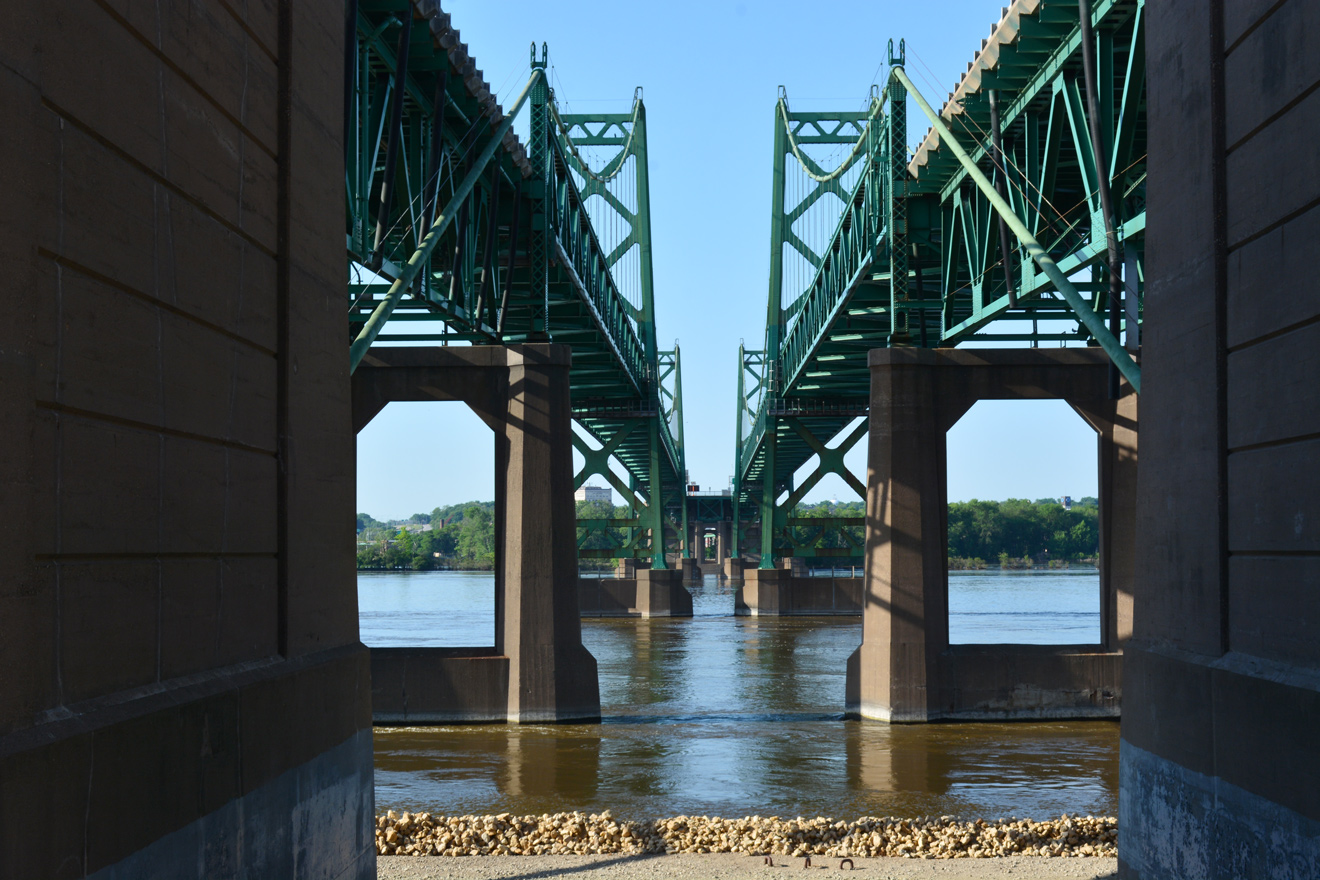 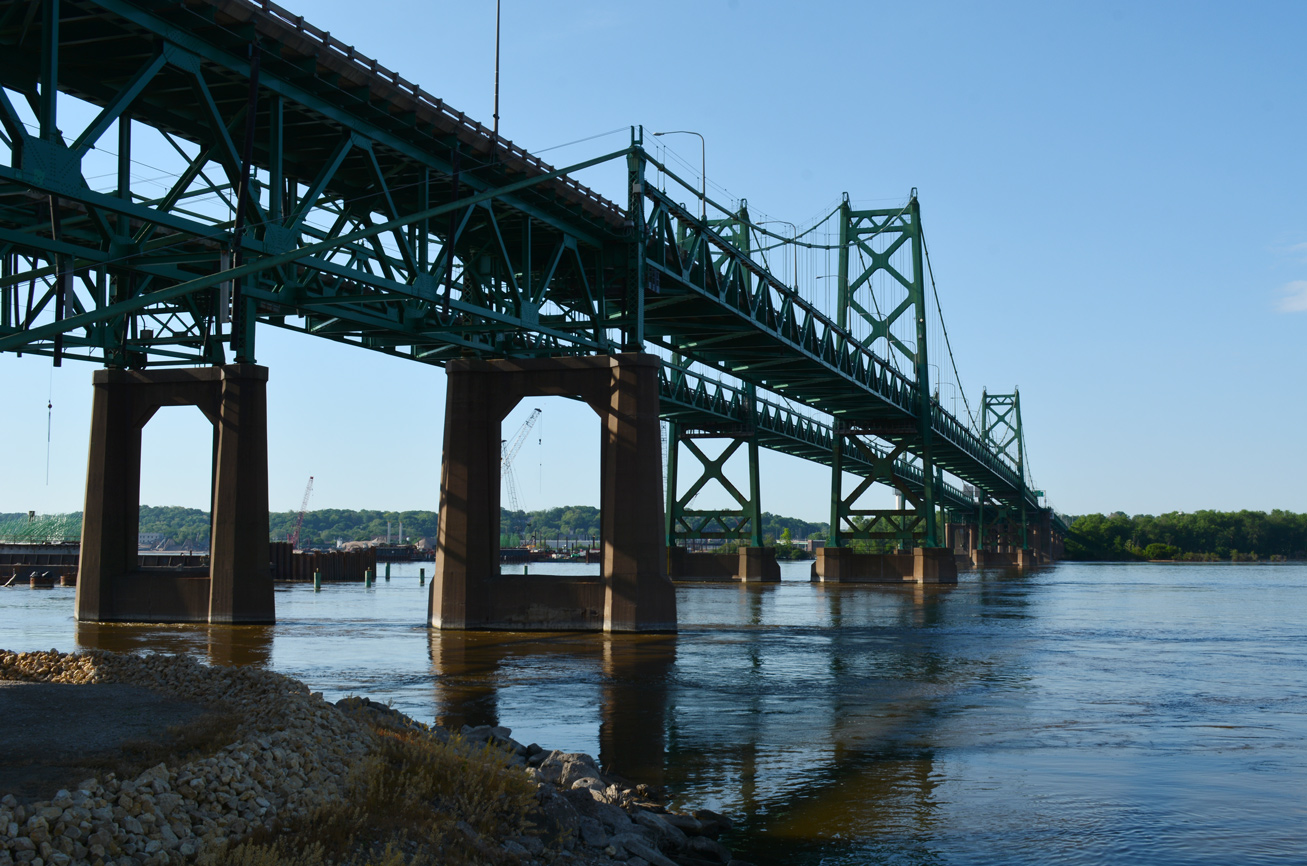 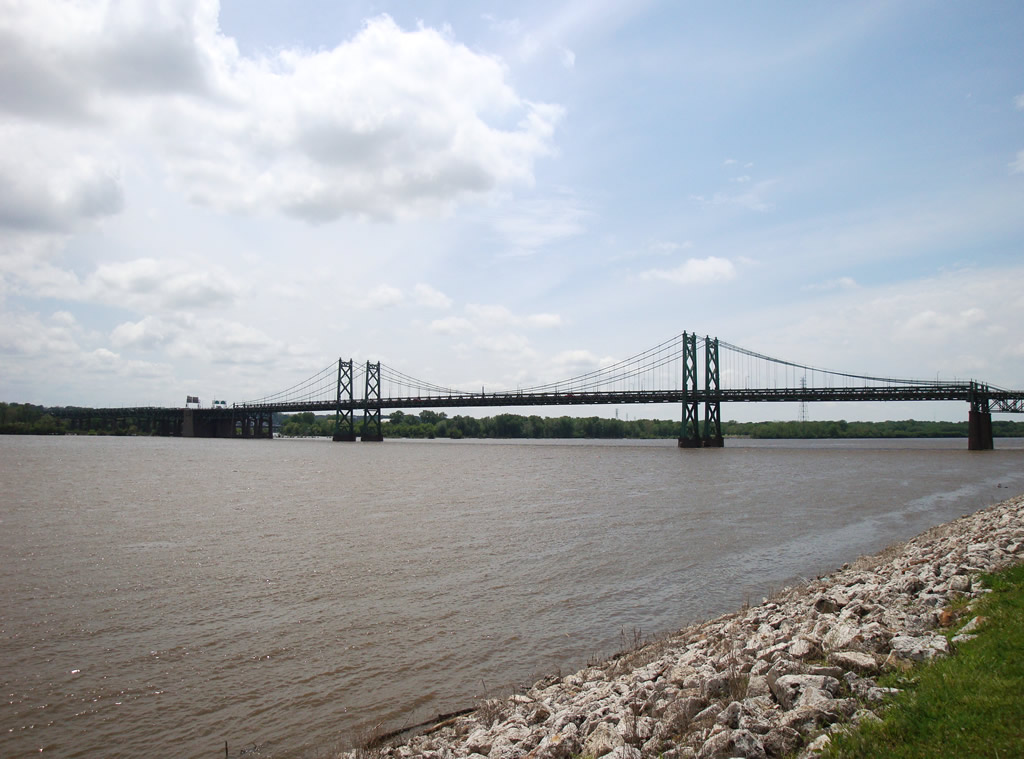 Constructed originally as a single span across the Mississippi River in 1935 for U.S. 6, the Iowa-Illinois Memorial Bridge was incorporated into Interstate 74 by November 26, 1974.3 The second span (southbound) was added in 1960, and until January 1, 1970,3 tolls were collected to cross the Mississippi River.1 This westerly view looks from the river levee near the Isle of Capri Casino in Bettendorf.

Interstate 74 leads south from I-80 in a rural area of northeastern Davenport by the Rhythm City Casino Resort. Generally serving commuter or local traffic, I-74 separates Bettendorf and Davenport south from 53rd Street to the Mississippi Riverfront. U.S. 6 combines with I-74 south from Kimberly Road to Moline, Illinois. The two routes eastbound cross the Mississippi River on the Iowa-Illinois Memorial Bridge, twin suspension bridges with two lanes.

A basket-handle, true-arch twin bridge replaces the Iowa-Illinois Memorial Bridge taking I-74/U.S. 6 across the Mississippi River. Earlier plans suggested a 2012 start date for work on the new six lane crossing, with an eight year time table for completion.2 Initial land acquisition for the new bridge approaches finally got underway in 2013.3 Subsequent construction in 2016 shifted roadways in Downtown Bettendorf and completed demolition work for the new right of way.

Construction for the bridge foundations commenced in Summer 2017, followed by work building the spans on either side of the Mississippi River and grading in Bettendorf. Totaling around $400 million, the first phase of the bridge work was the largest letting in Iowa history. The $1.2 billion bridge was expected to opened to traffic in 2020,4 with Phase 2 wrapping up in 2021 with demolition of the existing suspension bridges. The Iowa bound bridge opened on the morning of Friday November 13, 2020. I-74/U.S. 6 eastbound will shift onto the Iowa bound span during Winter 2021 in a two-way traffic configuration. Work on the Illinois bound bridge continues through December 2021.

Improvements are slated for all of Interstate 74 between the 53rd Street interchange (Exit 1) and 23rd Avenue in Moline, Illinois as Phase 3 of the I-74 Mississippi River Bridge project. Interchange redesigns or expansion, freeway widening to six overall lanes, and safety improvements are planned for the entire freeway. Of those, the 53rd Street interchange upgrade project was completed in November 2012. The remainder of the work is anticipated for 2022 or later, depending upon funding.

All of Interstate 74 through the Quad Cities was opened to traffic by December 10, 1975.4