The Iowa-Illinois Memorial Bridge links Moline, Illinois with Bettendorf, Iowa across the Mississippi River. Construction started in July 2017 replaces the twin suspension bridges with a pair of basket-handle, true-arch twin bridges. The new Iowa bound span opened to traffic on November 12, 2020. Construction continues on the Illinois bound bridge through December 2021.

Interstate 74 joins the Quad Cities with Galesburg, Peoria, Bloomington-Normal, Champaign-Urbana and Danville along a 220 mile route across the north central part of Illinois. The freeway parallels U.S. 150 for almost its entirety across the state. I-74 enters the Land of Lincoln across the aging Illinois-Iowa Memorial Bridge over the Mississippi River. The freeway leaves the state through the industrial outskirts of Danville en route to Crawfordsville and Indianapolis, Indiana.

The first portion of Interstate 74 to open in Illinois was the Illini Expressway in Peoria and the Murray Baker Bridge, which was dedicated on December 12, 1958.9 Completion through the rest of Peoria followed in 1965.1 Interstate 74 opened between Peoria and Bloomington in 1966 and from Bloomington to Mahomet in late 19712, thus completing the route in the state.1 Detailed opening dates for central Illinois:7 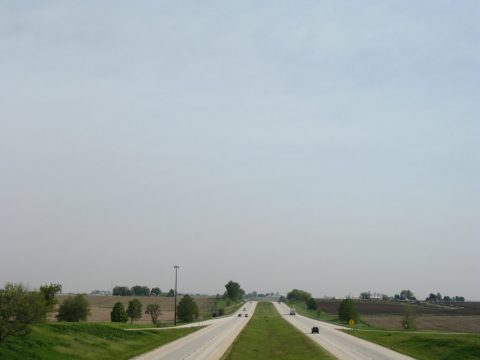 A gently undulating landscape of farm fields represents the drive along Interstate 74 between Quad Cities and Galesburg. This view looks south from the IL 81 overpass at Exit 24. 05/24/08

Construction between Spring 2013 and October 2016 expanded Interstate 74 to six lanes from Pleasant Hill Road at East Peoria to Morton Avenue (Exit 102). The $85-million project removed overpasses above an abandoned railroad just east of I-155, replaced the tunnels for Jefferson Street below I-74 with conventional overpasses, and reconfigured the trumpet interchange at I-155 with longer ramps. This included the construction of new overpasses for I-155 above I-74, which reversed the original setup. Work at Exit 102 rebuilt the six-ramp parclo interchange with the removal of the loop ramp (Exit 102B) from I-74 east onto Morton Avenue north. More information available at the IDOT project web site.

What was the largest road project in downstate Illinois, Upgrade 74 rebuilt all of Interstate 74 from East Peoria through Peoria. The $490 million broke ground on Oct. 21, 20023 and ran through November 22, 2006 with a formal ceremony celebrating the project completion held at Riverfront Park on November 20, 2006.4 Landscaping work however continued through 2007. 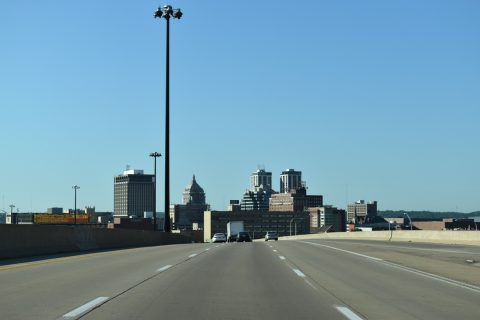 Work focused on the rebuilding of all Peoria interchanges to go along with expansion of the freeway to six and eight lanes wide. This included the addition of a system of tunnels added to link I-74 with Knoxville Avenue (IL 40).1 and a new flyover ramp from I-74 west to Illinois 40 (Washington Street) and the Bob Michel Bridge among other improvements.

The Murray Baker Bridge over the Illinois River was closed on April 1, 2005 to rebuild the approaches with work entailing the demolition of the Adams Street on-ramp with a replacement from near Jefferson Avenue and the removal of a 180-foot segment of truss.5 A "Meet Me in the Middle" festival was held on October 2, 2005 where residents could walk the bridge before it reopened to traffic between downtown Peoria and East Peoria.6 The bridge is named for Murray Baker, a Peoria philanthropist who helped convince Holt Manufacturing Co. to build a factory in East Peoria, which later became part of the Caterpillar Tractor Company, with Baker serving as vice president.5

Signs installed during the Upgrade 74 project began a 10-year replacement of all signs and removed the need for overhead lighting. Replacements over the years have added panels using Clearview font.5