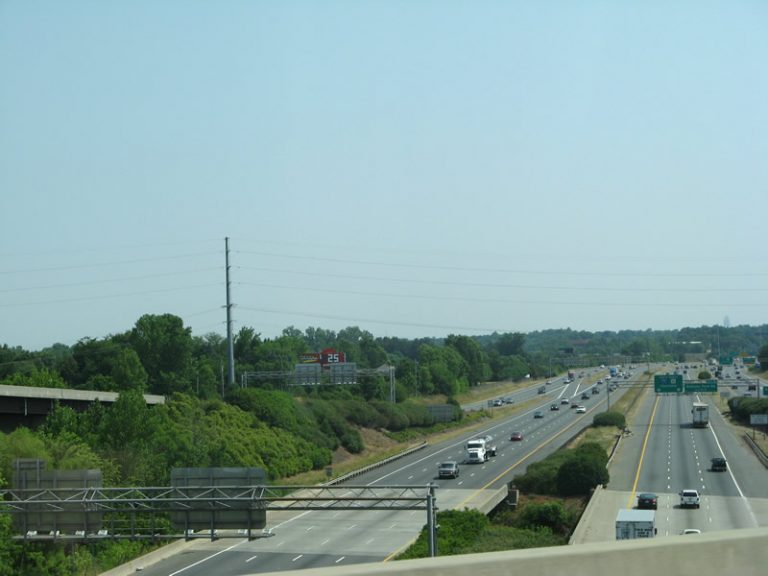 Interstate 77 passes through a four-level interchange with Interstate 485 just north of the South Carolina state line in Charlotte. Sugar Creek meanders through the exchange. 06/01/07

Interstate 77 travels 106 miles through North Carolina from Charlotte to Virginia just south of the Blue Ridge Mountains. Serving regional and freight traffic from the Southeastern U.S. to the Great Lakes Region, I-77 joins the Charlotte metropolitan area with I-40 at Statesville and I-74 west of Mt. Airy.

Heavy commuter traffic along Interstate 77 between Uptown Charlotte and Mooresville in Iredell County was addressed by the I-77 Express Lanes project. Costing $647 million and split into three sections, construction commencing in November 2015 expanded 26 miles of the four to six lane freeway. Originally anticipated to open by late 2018, the addition of "direct-connect" ramps at the exchange with I-85, allowing motorists to join with or depart from the Express Lanes without crossing the general traffic lanes, added several months of work.1

The South Section added two tolled Express Lanes in each direction of Interstate 77 between I-277/NC 16 (Brookshire Freeway) and the exchange with I-85. The Central Section added two tolled Express Lanes per direction along the six lane segment of I-77 northward from I-85 (Exit 18) to Catawba Avenue (Exit 28). The North Section added an additional managed lane per direction on the four lane portion of I-77 to a point north of NC 150 (W Plaza Drive) / Exit 38. The managed lanes are operated by the I-77 Mobility Partners.

The Central and North Section of the I-77 Express Lanes, from Hambright Road north of I-485 in Huntersville to NC 150 in Mooresville, commenced operations on June 1, 2019.2 The 11.5 mile long South Section opened to motorists from the Brookshire Freeway northward to I-485 on the evening of November 16, 2019.1 The I-77 Express Lanes project converted the exchange with Griffith Street at Exit 30 into a dumbbell interchange and modified the systems interchange at I-277/NC 16 with new flyovers to the Express Lanes and a replacement ramp from I-277 south to I-77 south.1

Eight miles of Interstate 77 leading north from I-85 to I-485 were previously widened in conjunction with the addition of HOV lanes between December 2001 and December 2004 at a cost of $83 million. This brought the freeway up to eight overall lanes with a carpool lane in each direction. Work upgraded the exchange with I-85 as well, where a new bridge was added for the northbound ramp from I-85 to I-77 and the south end of the carpool lane.3,4,5 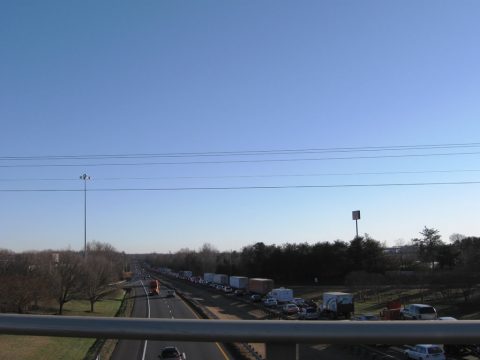 Looking southward at Interstate 77 from N.C. 150 in the town of Mooresville prior to the addition of the I-77 Express Lanes. Heavy traffic trudged southward due to a series of traffic accidents during the afternoon peak hours. Suburban development extends far north from Charlotte along the freeway corridor. 12/30/08