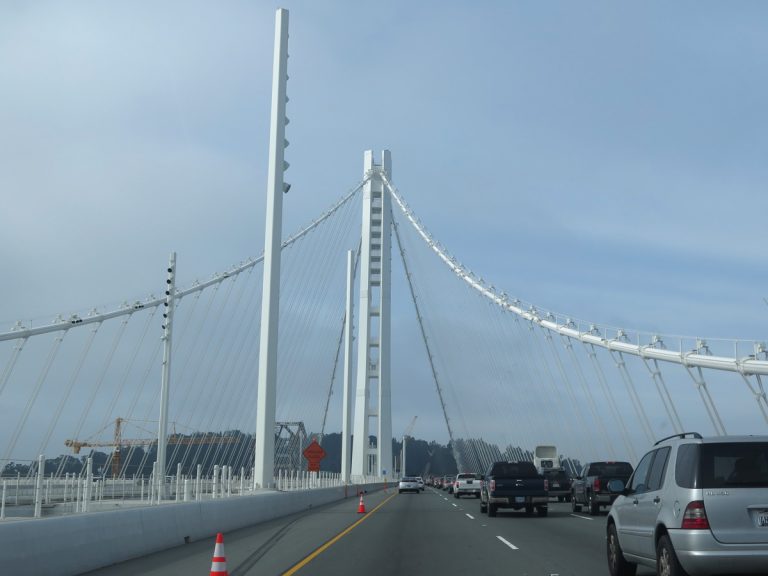 The new eastern span of the San Francisco-Oakland Bay Bridge opened to traffic on September 2, 2013. Built over the course of 11 years and at a cost of over $6.5 billion, the signature span connects Oakland with Yerba Buena Island. 03/08/15

Interstate 80 is a major freeway across northern California. Starting in San Francisco, I-80 spans San Francisco Bay across the San Francisco-Oakland Bay Bridge. The toll bridge consists of two spans, a suspension bridge east to Yerba Buena Island, and a self-anchored suspension bridge from the island to Oakland. Combining with Interstate 580 along a wrong-way concurrency, I-80 turns north through Berkeley to Richmond. The northerly course extends to the Alfred Zampa Bridge spanning Carquinez Strait.

Making a gradual northeasterly turn, Interstate 80 passes through Vallejo to Fairfield, Vacaville, Davis and the Sacramento metropolitan area. The freeway bypasses the city to the north while U.S. 50 and Business Loop I-80 form an urban loop to the south. I-80 continues northeast through suburban areas to Roseville and Auburn.

Gradually gaining elevation, I-80 arcs northeast into the Sierra Nevada, passing through Blue Canyon, Emigrant Gap and Yuba Pass. The often snow covered stretch culminates at Truckee, where SR 89 and SR 267 tie in from scenic Lake Tahoe. The remainder of Interstate 80 overlays historic U.S. 40 alongside the Truckee River to Verde and Reno, Nevada.

Interstate 80 begins its transcontinental route in San Francisco, the city by the bay. Originating at an interchange with U.S. 101, I-80 immediately ascends to the James Lick Skyway, which was rebuilt in its entirety in the late 2000s. The skyway grants spectacular views of Downtown San Francisco as it connects directly to the San Francisco-Oakland Bay Bridge.

The San Francisco-Oakland Bay Bridge carries Interstate 80 across San Francisco Bay. The original bridge was under construction from July 9, 1933, and it opened to traffic on November 12, 1936. The bridge initially carried the dual designation of U.S. 40 and U.S. 50. The Bay Bridge originally consisted of three identifiable segments: western span (suspension bridge with four towers and mid-span anchorage), Yerba Buena Tunnel, and eastern span (a cantilever through truss bridge with an approach causeway). It was also the first suspension bridge to serve San Francisco (as it opened approximately six months prior to the Golden Gate Bridge on U.S. 101 and SR 1). The bridge was originally double-decked through all three segments. From 1936 to 1963, the lower deck carried rail, truck, and auto traffic, while the top deck carried auto traffic only in both directions. In 1963, the bridge converted to the current configuration with eastbound traffic on the bottom level and westbound traffic on the top level. The Yerba Buena Tunnel, which passes through Yerba Buena Island, is the largest diameter transportation bore tunnel in the country and possibly the world.

Earthquake retrofitting improved the western (traditional suspension) span between 1994 and 2004, which is now up to current specifications. However, the original eastern span was not up to those specifications, and construction began in 2002 to replace it. After a decade of work, the new eastern span opened to traffic on September 2, 2013. The old eastern span was permanently closed on August 28, 2012, to allow for the shifting of traffic onto the new span. The new eastern span is a single-anchored suspension span with a single tower, along with a long approach causeway coming from Oakland. The causeway was completed first, and the single-anchored suspension segment was completed second. Unlike the tunnel and western span, the eastern span now has side-by-side travel lanes rather than double-deck travel lanes. A bicycle/pedestrian path also follows the eastern span all the way to Yerba Buena Island. The old eastern span was subsequently demolished.

Upon leaving the Bay Bridge, Interstate 80 enters the MacArthur Maze, then turns north at Oakland to parallel the bayshore via the Eastshore Freeway. This freeway, which was originally built as U.S. 40, carries Interstate 80 almost due north toward Vallejo. Much of this segment of freeway, especially near Berkeley, is built on landfill.

The Carquinez Bridge consists of two spans that carry Interstate 80 over the Carquinez Straits between Crockett in Contra Costa County and Vallejo in Solano County. Visible at this time was the 1927-built span that carried U.S. 40 and later I-80 eastbound. That cantilever span was removed in phases through 2007. 11/28/04

Prior to reaching Vallejo, Interstate 80 crosses the Carquinez Straits via asteel cantilever bridge westbound and a suspension bridge eastbound. Debuting to motorists on November 11, 2003, the Alfred Zampa Bridge replaced the original steel cantilever span that had opened on May 21, 1927 as part of U.S. 40. The eastbound span opened to traffic in 1958. Following completion of the Zampa Bridge, a succeeding project retrofitted the 1958-span for earthquake safety while eastbound traffic temporarily shifted to the 1927-bridge. Subsequent work through September 2007 dismantled the 1927 span. Leaving the Carquinez Straits, Interstate 80 turns northeast at Vallejo, following a well-traveled route between the Bay Area and the capital city of Sacramento.

Beyond Carquinez Straits, Interstate 80 turns northeast at Vallejo, following a well-traveled route between the Bay Area and the capital city of Sacramento, passing through Fairfield, Vacaville, and Davis along the way, finally crossing the wide Yolo Bypass flood control channel before reaching the capital city metropolitan area. At West Sacramento, Interstate 80 splits into Business Loop I-80/U.S. 50, which serves downtown Sacramento, and regular Interstate 80, which bypasses the city to the north.

I-80 travels through several suburbs as it skirts Sacramento to the north. Passing through Roseville and Auburn, Interstate 80 begins a slow ascent into the foothills of the Sierra Nevada. As one of three major all-weather trans-Sierra routes in the winter (others include U.S. 50 and SR 88), Interstate 80 is frequently busy with commercial traffic, tourists, skiers, commuters to Reno, etc. The freeway narrows to four lanes and remains a busy corridor through the foothills toward Donner Summit. Interstate 80 crosses Donner Summit, one of the highest points along the freeway, then descends into Truckee, a gateway to scenic Lake Tahoe. Passing by a few small towns in the Truckee River valley, Interstate 80 enters Nevada just east of Farad.

Interstate 80 ends at an interchange with U.S. 101, where it meets the Central Freeway. This was not always the planned terminal point for the freeway. Prior to August 1965, Interstate 80 was planned to extend across the San Francisco Peninsula along a path roughly located along Fell and Oak Streets (called the Western Freeway) to meet SR 1 (which would have also carried the Interstate 280 designation as part of the 1960s plan). Along with the proposed and now cancelled Western Freeway, U.S. 101 (Central Freeway) (now Octavia Boulevard) between Fell Street (the planned Western Freeway split) east to the current Lick/Central interchange was proposed to carry part of Interstate 80.

The James Lick Skyway portion of Interstate 80 was replaced for a seismic retrofit through 2006 to 2009. Construction resulted in the demolition of several original structures approaching the Bay Bridge. The skyway was originally constructed in 1936 along with the Bay Bridge and was fully replaced in stages during this project. During construction, the highway was routed onto temporary structures located to the north of the existing viaduct, which was demolished and rebuilt from the ground up. Traffic has been switched to the new viaduct, and the temporary structures were later removed.

There have been prior discussions about whether the section of Interstate 80 between U.S. 101 and the Embarcadero exit (which is where Interstate 280 would have connected to Interstate 80 had that connection been constructed) may or may not be an official Interstate. An interesting confluence of facts leads to the reasons behind why the skyway may not be part of the Interstate Highway System:

For much more on this routing change in Yolo and Sacramento Counties, see Business Loop I-80.