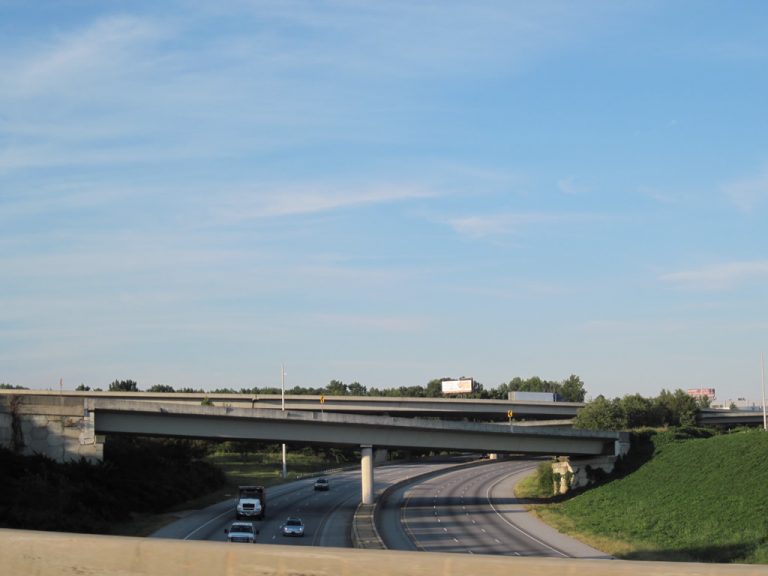 Six lanes of Interstate 85 curve underneath a network of ramps carrying traffic between Interstate 285, SR 14 Spur, and the I-85 mainline. Originally a three-wye directional interchange joined the three routes with access to SR 14S only available from I-85 south / I-285 west. 09/28/10

Measuring 179 miles in length through the Peach State, Interstate 85 leads northeast from Montgomery, Alabama through the capital of Atlanta en route to Greenville, South Carolina. Doubling as a commuter route for the Atlanta metropolitan area, the freeway carries six lanes or more from the Coweta County line near Exit 35 to SR 20 (Exit 115) at Buford. An overlap with Interstate 75 along the Downtown Connector in Atlanta swells the freeway to 16 overall lanes along the eight mile stretch.

A major fire started underneath the elevated lanes of Interstate 85 at Piedmont Road (SR 237) in northeast Atlanta on March 30, 2017. The fire caused a 350 foot section of the northbound viaduct to collapse and significant structural damage to an adjacent 350 foot section of the southbound structure. A closure of the Northeast Expressway was implemented in both directions from the split with I-75 north to Gerogia Route 400 until April 1, when northbound traffic was opened from I-75 to Exit 86 (SR 13) and from the SR 13 on-ramp ahead of Buford Highway. The entire bridge structure will be rebuilt.9 Reopening of the freeway was anticipated for June 15, 2017.

Contractor C.W. Matthews completed repairs on the I-85 bridges well before the original completion date. Earning a $3.1 million incentive, the contractor reopened the northbound lanes to traffic on the evening of May 12, 2017. The southbound lanes reopened on May 14.10

The $1.4 billion "Freeing the Freeways" megaproject included the $94 million redesign of Interstate 85 southwest of Hartsfield-Jackson International Airport (ATL) where the freeway overlaps with the Perimeter Highway. The 1.6 mile long project split the two freeways into separate roadways, with the addition of collector distributor roadways for the interchange with SR 279 (Old National Highway), while expanding the overall capacity from six to 16 lanes. This work coincided with the $115 million widening of 4.2 miles of I-85 southwest from Interstate 285 to SR 74 (Exit 61) and a 12 mile widening from Exit 61 to Peachtree City. Both those projects expanded the freeway from four to eight lanes with work on the northernmost projects completed by June 1988 and the southern project later that summer. The first contract for the work was let in 1982.1

Construction of the Tom Moreland Interchange, where I-85 and I-285 meet to the northeast of Atlanta, was undertaken simultaneously with work on Interstate 75 between I-285 and Windy Hill Road. Totaling $124.5 million, the two projects were finished by September 1987.2

Upgrading the Downtown Connector wrapped up with the reconstruction of 2.3 miles of I-75/85 between Williams Street and Interstate 20 in 1988. The overall 4.4 mile long Downtown Connector widening cost $334.3 million, with one third of the costs coming from the Capitol Hill Interchange where Interstate 20 crosses I-75/85. The interchange project rebuilt the three-level exchange to eliminate left exit ramps. This included raising I-20 onto a 1,700 foot long bridge at 60 feet above the Connector. Further south, work to expand I-75/85 from the stadium to the Lakewood Freeway (Langford Parkway) was completed in October 1987.3,4 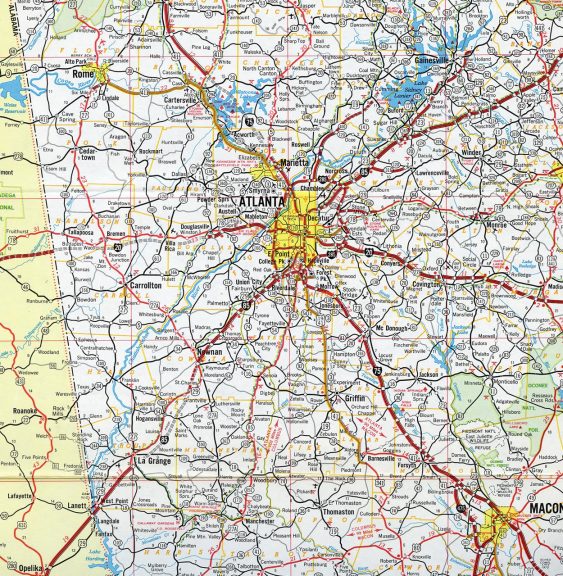 The final stretch of I-85 built in Georgia was the segment leading north from SR 219 at La Grange to U.S. 27 Alternate and U.S. 29 south of Newnan.

A $40 million project undertaken between May 1995 and May 31, 1996 reconfigured Interstate 85 northeast from the Downtown Connector to the Gwinnett County with two new HOV lanes. Existing lanes were narrowed from 12 to 11 feet with a portion of the shoulder restriped as well to accommodate the left side carpool lane. Done in time for the 1996 Summer Olympic Games in Atlanta, the project converted all preexisting left exit ramps along I-85 into HOV only exits. This included Interstate 85 at Lindbergh Drive and the Downtown Connector ramps for Williams / Spring Streets, Piedmont Avenue, Pryor Street and Memorial Drive.5

A major revamp of the Interstate 85 and SR 316 exchange near Duluth took place between February 20, 2006 and December 31, 2008. Costing $147 million, a state spending record at the time, the project involved the building of 13 bridges and 31 miles of new lanes including collector distributor roadways and extension of the then-HOV 2 lanes that ended at Steve Reynolds Road (Exit 103). The previous wye interchange (Exit 106) with SR 316 was greatly expanded with new flyover ramps connecting with the I-85 Express lanes and the added c/d roadways running from Pleasant Hill Road (Exit 104) to SR 120 (Exit 107).8

The HOV-2 lanes along I-85 from Interstate 75 northeast to Buford were converted into High Occupancy Toll lanes on October 1, 2011 after several months of construction. The change allows single occupant motorists to use the lanes while paying a toll collected with a Peach Pass or network associated transponder. HOV-3 traffic may use the lanes free of charge with a Peach Pass set to "No Toll" status.9