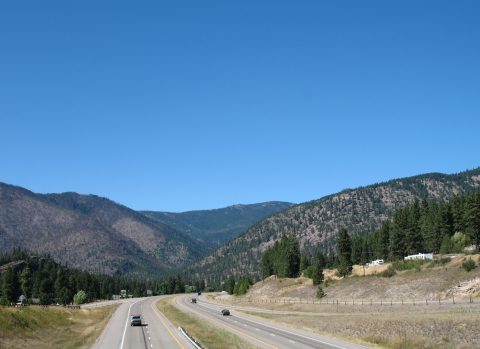 Interstate 90 leading away from the west end of Business Loop I-90 and Alberton toward Plateau. 09/01/06 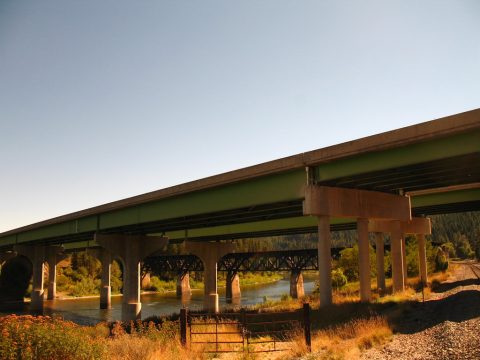 Waters of the Clark Fork river flow northward below Interstate 90 at St. Regis. Old U.S. 10 parallels this bridge to the north while an abandoned railroad bridge remains in place to the south. 09/01/06

Entering the state at Lookout Pass in the Bitteroot Mountains, Interstate 90 follows the original course of U.S. 10 southeast to St. Regis and Missoula. The freeway combines with U.S. 93 and MT 200 through Missoula, and with U.S. 12 from Montana's second largest city eastward to Garrison. Interstate 90 hooks southward from Garrison to Butte and Silver Bow County, where the freeway shares a 7.556 mile overlap with Interstate 15. I-15 joins Butte with Dillon and Pocatello, Idaho to the south and the capital city of Helena and Great Falls to the north.

East from Butte, Interstate 90 remains along the former U.S. 10 corridor to Whitehall, Three Forks and Bozeman. U.S. 191 joins the route between Bozeman and Big Timber and U.S. 89 for seven miles at Livingston. Continuing east along the Yellowstone River, Interstate 90 reaches Columbus, Laurel and Billings, where I-94 splits and follows old U.S. 10 to Miles City, Glendive and Bismark, North Dakota. Interstate 90 enters Montana's largest city with U.S. 212 and exits it with both U.S. 212 and U.S. 87 to Hardin and the Crow Indian Reservation.

Interstate 90 turns south from Hardin, remaining cosigned with U.S. 87 to Sheridan and Buffalo, Wyoming while U.S. 212 peels away from the freeway south of Crow Agency for Lame Deer and Broadus. I-90 concludes a 552.364 mile cross-state route south of Aberdeen through hilly grasslands.

Three sections of Interstate 90 were opened in October 1966. They included portions in Billings, Manhattan and Bozeman and between Butte and Whitehall. Opening of I-90 across Homestate Pass represented the second Interstate crossing of the Continental Divide in the U.S.1 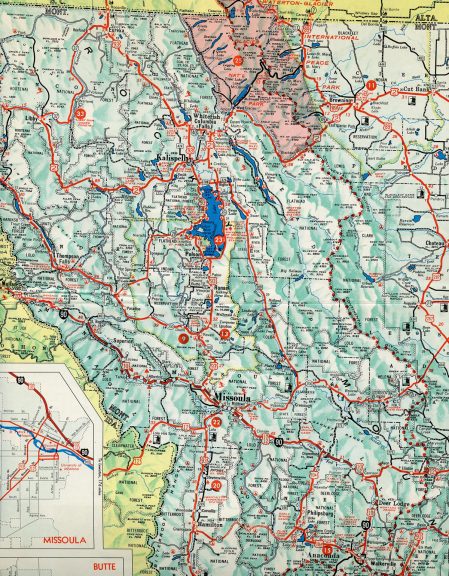