Interstate 95 travels through eastern South Carolina's Low Country between the Savannah River and the North Carolina state line near Dillon. The majority of traffic along the 199-mile freeway just passes through the Palmetto State between Florida and the Northeastern United States. Additionally I-95 generally stays in rural areas, though it bypasses the outskirts of Florence to the north and west.

Overall Interstate 95 carries just four lanes of travel in South Carolina with the exception of a 10-mile six-lane section at Florence. The widened portion was completed in April 2004 after two years of work for $68 million. Expansion was fueled by an increase in traffic due to area growth and tourist traffic headed to Myrtle Beach.1 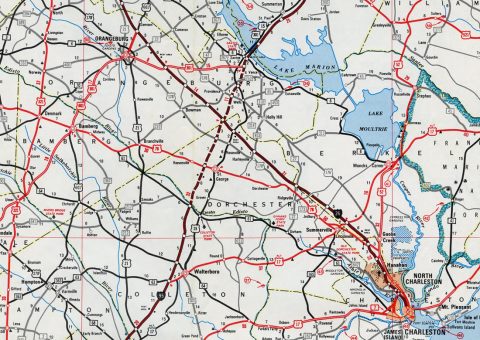 1975 South Carolina Official Highway Map - The final stretch of Interstate 95 opened in the Palmetto State was the portion through Dorchester and Orangeburg Counties on February 16, 1976.3

As part of a pilot program offered by the federal government in 2012, North Carolina and Virginia joined Missouri to fill three available slots to toll existing free Interstate highways. The Virginia and North Carolina plans involved the implementation of tolls along Interstate 95 south of Fredericksburg and state wide in the Tar Heel State. The North Carolina plan would help fund $4 billion in road improvements along their 182 mile stretch of I-95, including expansion of 50 miles of freeway to eight lanes. The Virginia tolling was expected to generate $50 million a year to help pay for widening, safety improvements and repairs. Because the freeway in the Palmetto State favors out of state traffic, South Carolina officials also suggested tolling Interstate 95 to help pay for both the modernization and expansion of the original freeway.2 With tolls never implemented in the neighboring states, the idea never gained traction in South Carolina.

State officials indicated on January 23, 2017 that widening the remaining 190 miles of I-95 in South Carolina would cost upwards of $4 billion. Work would likely be broken into phases and include replacing bridges and modifying interchanges as well. The project needs to rank high enough on the SCDOT priority list in order to gain funding.4

Construction at the wye (Exit 97) taking U.S. 15 & 301 south away from Interstate 95 at Santee expanded the exchange into six-ramp parclo interchange with a new access road (S.C. 6 Connector) leading east to S.C. 6. The $41 million design-build project is expected to help boost economic development for the Global Logistics Triangle, an area bound by I-26, I-95 and U.S. 301. A ground-breaking ceremony for the upgrade took place in October 2014, and work was scheduled for completion by October 18, 2015. Floods pushed the project back to November 2016.5 Traffic began using the interchange in February 2017, and S.C. 6 Connector east opened in April 2017. Finishing work wrapped up September 2017.5

Finished in October 2018, safety improvement work along 33 miles of Interstate 95 in Jasper County cleared trees, flattened some slopes and added cable barriers or guard rails. Budgeted for $9.8 million, tree clearing removed all vegetation within medians less than 160 feet in width. Wider medians were cut back to provide at least a 55 foot wide clear zone on either side. Also providing a 55 foot clear zone, trees were cut back adjacent to the outside shoulders. The vegetation removal is designed to reduce tree-related crashes.7