Interstate 140 encircles the Wilmington area from west of Leland in Brunswick County to Kirkland in eastern New Hanover County. The 25 mile long freeway was built in stages, with the initial segment opened in 2006 between U.S. 421 and U.S. 17 Business northeast of Wilmington. The succeeding section was complete in 2014, forming a separate bypass of Leland between U.S. 17 at Bishop and U.S. 74/76 between Malmo and Eliah. The last 7.5 mile stretch, linking the NC 140 segment west of Leland with I-140 east of U.S. 421, debuted to motorists on December 19, 2017.1 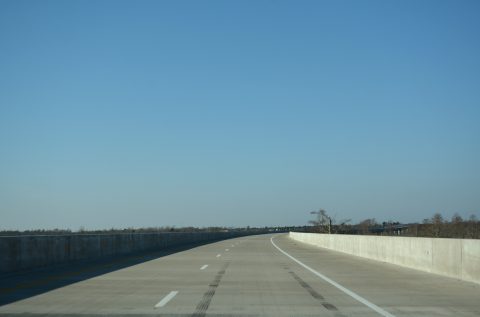 U.S. 17 was realigned to bypass Wilmington alongside U.S. 421 north and Interstate 140 east between Wrightsboro and Skippers Corner. The freeway east from Interstate 40 to Kirkland was posted solely as U.S. 17, but internally designated by NCDOT as North Carolina 140. AASHTO approved the relocation on May 6, 2005, with the former route across Wilmington redesignated as an extension of U.S. 17 Business.

Although sign changes were not yet made by January 2018, U.S. 17 was formally relocated back through Wilmington with AASHTO approval on May 14, 2015. The realignment replaced U.S. 17 Business along Market Street, and leaves I-140 without a concurrency.