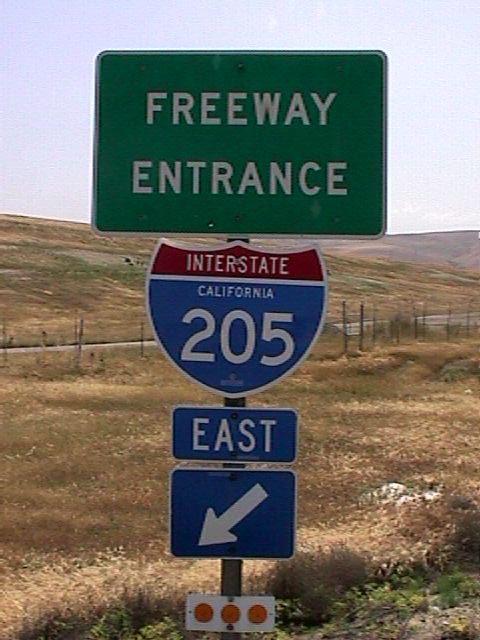 This freeway entrance shield assembly is located on an approach road to Interstate 205 near Tracy. Photo by Joel Windmiller (06/01).

Interstate 205 is a short connector freeway between I-580 and I-5 in the vicinity of Tracy. Only four lanes wide at its eastern end, it is slated to be widened to accommodate the flow of commuter traffic between the Central Valley and the San Francisco Bay Area. Interstate 205 replaced U.S. 50, and the original route of U.S. 50 through Tracy is now part of Business Loop I-205, which almost eclipses its parent route in mileage and length.

Interstate 205 bypasses Tracy via former U.S. 50 (Lincoln Highway). The original route is 11th Street, which is now designated as Business Loop I-205. Fully opened in December 1970 as a four lane freeway, it was expanded to six lanes during the mid 2000s. Traffic volumes increased as more people lived in the Central Valley and worked in the Bay Area. This created a commute between the two regions via I-205 and I-580.

Many thanks to C.J. Moon for his assistance in providing this historical chronology.