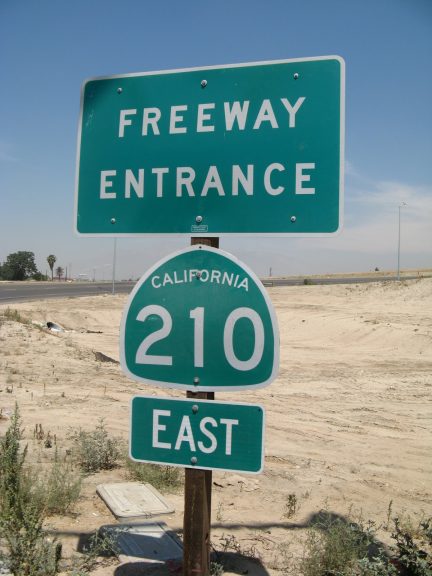 Plans called for the addition of the entire SR 210 freeway to the existing Interstate 210 from San Dimas east to Redlands upon completion of the last segment of freeway. Interim changes replaced signs for SR 30 with SR 210 markers by March 2008. The process to add former SR 30 to Interstate 210 began in 1998, when the designation of the state route was legislatively changed to SR 210. Then on November 6, 1998, the state of California submitted SR 30 for inclusion in the Interstate Highway System. AASHTO rejected this proposal because the freeway segments were not complete. As of 2018, the freeway was not resubmitted for approval.

Interstate 210 (Foothill Freeway) was planned in the 1940s, commissioned in the mid-1950s, and completed in stages through the 1960s, 1970s, and 1980s. California 210 (the state route section east of California 57) was completed in July 2007. As portions were completed, parts were signed as California 118 northwest of Pasadena and U.S. 66 east of Pasadena according to maps from that era. Once the significant portions of the route were completed, Interstate 210 markers were erected.

With the opening of the final link of California 210 on July 24, 2007,1 the combination of Interstate 210, California 210, and California 30 offer a continuous freeway link from Los Angeles (San Fernando Valley) to Redlands. It is not clear when the California Department of Transportation (Caltrans) will request an Interstate 210 designation for the entire freeway route.

Prior to the legislative conversion of the former SR 30 corridor into SR 210, a short section of Interstate 210 used to extend from the current SR 57 and SR 210 interchange in San Dimas south to the Kellogg Interchange, where I-10 (San Bernardino Freeway), SR 57 (Orange Freeway) and SR 71 (Corona Expressway) come together in Pomona. The section of Former Interstate 210 between these two points is now signed as SR 57 (Orange Freeway) and is legislatively part of SR 57. This truncation was performed in preparation for the conversion of SR 210 into Interstate 210.

The legislative change that extended SR 210 east and eliminated SR 30 occurred in 1998 as a result of California State Assembly Bill AB 2388. However, signage changes came in stages after this legislative action. By 2008, all SR 30 references were eliminated from freeway segments, although some route markers remained in place along select portions of Highland Avenue through 2009. The completed freeway segments were signed as SR 210 as of 2009.

The following are opening dates for each segment of Interstate 210:4

The construction history of Interstate 210 listed below is based on the official bridge logs. Note that Caltrans tends to construct bridges well in advance of grading and completing the remainder of freeways, so the dates on the bridges often precede the actual opening dates of the freeways themselves.2

Regarding the Interstate 5 / 210 connector ramps, Adam Twiss indicates that the I-210 west to I-5 south connector. along with the rest of the Interstate 5, I-210 and SR 14 interchanges were constructed in 1970-71, and about to open when the Sylmar Earthquake struck on February 9, 1971. Damages to this structure illustrates the severity of the event. On the day of the earthquake, the original South Connector fell on a pickup killing two people on the Golden State Freeway. The portion of Interstate 210 from I-5 to Paxton Street was severly damaged in 1971, delaying the opening of this section. The fault that caused the earthquake ripped through the freeway northwest of Maclay Street. This included the westbound on-ramp and eastbound off-ramp. There is a slight hump on the number three lane on the eastbound side - a slight offset near where the asphalt and concrete meet, and also at the curb. This earthquake also buckled the Golden State Freeway just south of the San Fernando Road overcrossing.5

More on the California 30 north-south section of freeway from Scott Parker:3

Prior to the spring of 1992, when the full facility was completed, California 30 -- west to east -- looked like this: freeway to the present Highland Ave. interchange in east San Bernardino, east on Highland to Boulder Avenue (the California 30/330 intersection), where it turned south. It went south on Boulder to 5th, then turned west on 5th to the freeway alignment, then went south again over the eastbound two lanes across the Santa Ana River watercourse, extending south to San Bernardino Avenue in Redlands. At that point, traffic was shunted off onto that street east to the east side of the freeway berm, where it turned south onto Tennessee Street (which had been extended north circa 1982-83 to serve as a frontage road for the California 30 freeway, as it does today) and thence to the Interstate 10 interchange.

Some maps of that era showed California 30 temporarily extending east all the way to Orange Street (the original state highway alignment) then south to California 38 at Lugonia Street, where it terminated. While this may have been the officially designated alignment (Caltrans ceded the part of Orange Street that dipped into the Santa Ana River bed over to the local jurisdiction), signage from California 30 east directed traffic heading to Interstate 10 directly down Tennessee Street (and, if you have been that way and paid notice, there is room on the overhead signage for the Tennessee St. exits on Interstate 10 -- in both directions -- for a state highway shield).

The last segment of California 210 opened on July 24, 2007, through Rialto and Muscoy.1 For the ensuing five years, the interchange between Interstate 215 and California 210 was under construction. The final link, which connects California 210 east to Interstate 215 south, opened to traffic on July 23, 2012. Prior to this ramp opening, this connection required a lengthy detour along Highland Avenue.

Separate "Play on the Freeway" events preceded opening of the Foothill Freeway. The 2002 celebration took place at Upland, allowing attendees to tour the newest section of SR 210 leading east from La Verne. A second open house took place in 2007 on the new section of SR 210 through Rialto. See photos from both days at the following gallery: 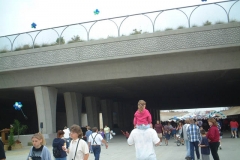 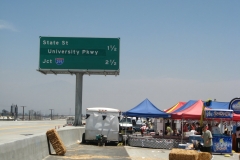